All the best local brews to drink this instant 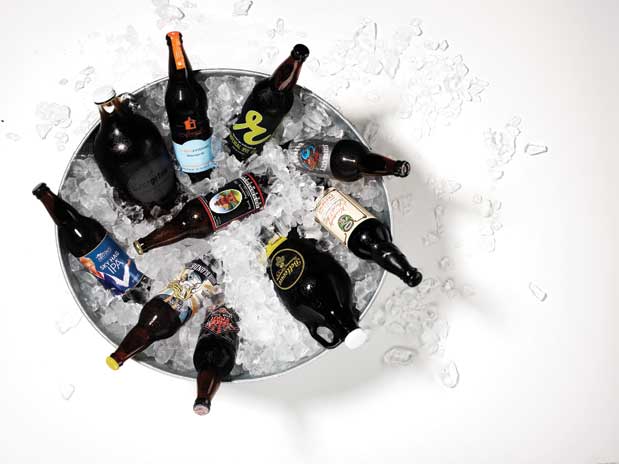 There are a lot of craft beers in the world, but our current favorites include old faithfuls, new tastes and recently acclaimed local brews. Unless noted, look for these beers in the breweries’ tasting rooms, at bars pouring good beer, or find them in 22-ounce bottles at better grocery stores and bottle shops around the Puget Sound area.

1. Dubbel Entendre, Sound Brewery
This traditional Belgian-style dubbel ale, brewed in Poulsbo, tickles your nose with wisps of fruit, berries and spice. The taste is bread-like with a hint of spice that hides its considerable alcohol content (8.0 percent alcohol by volume).

2. Imperial Rye IPA, Reuben’s Brews
This Ballard-brewed beer packs a significant punch in terms of alcohol content (8.4 percent alcohol by volume), but still manages to be dry and refreshing. The rye flavor is practically unnoticeable, but serves to dry the beer out on the palate and clear the way for the hop character.

3. Saint Florian IPA, Silver City Brewery
Floral and spicy notes on the nose and refreshing citrus tinges on the palate make this Bremerton-brewed beer an exceptional IPA. A percentage of the proceeds from the sale of this beer—named after the patron saint of firefighters—is donated to the Washington State Council of Firefighters Benevolent Fund and the Kitsap County Council of Firefighters Benevolent Fund.

4. Kentucky Dark Star Oatmeal Stout, Fremont Brewing
Oats add a smooth texture to this deceptively dark, drinkable big beer, brewed on the far east side of Fremont. Intricate flavors conjure thoughts of figs, caramel, coffee and even a bit of citrus. Be careful: This beer hides its strength (8.5 percent alcohol by volume) well.

5. Bellevue ESB, Bellevue Brewing company
This extra special bitter (ESB) starts with a biscuit quality that slowly morphs into a very gentle bitterness that lingers on the finish. Bellevue Brewing excels at this all but forgotten style of beer. Only available on tap, at better beer bars or get it at the brewpub in Bellevue.

6. Pike XXXXX Stout, Pike Brewing
This old Pike Place Market–brewed standby keeps its head above the crowd with complex flavors of roasted barley, chocolate, coffee and hops. It’s a beautiful beer to sip on cold, rainy nights, or consider it with dessert any night of the year. Get it at the Pike Pub in the Market or find it in bottles at better grocery stores and bottle shops.

8. Sky Hag Double IPA, Airways Brewing
More bitter than sweet best describes this widely popular beer brewed in Kent. The aroma and flavor of this hops-dominated beer include elements of citrus, pine and grass, with just a hint of malty sweetness.

9. Chopper’s Red Ale, Georgetown Brewing
Balance defines this uncommonly hoppy amber ale brewed in Seattle’s Georgetown neighborhood. The resinous, piney hops  complement the sweetness of the beer without lending too much bitterness. Look for it on tap at better beer bars or pick up a growler at the brewery.

10. Ruud Awakening IPA, Old Schoolhouse Brewery
This IPA beautifully balances fruity bitterness with malty sweetness. There are countless Washington-brewed IPAs, but this one (named after the family that owns and operates the brewery in Winthrop) took home a gold medal at the 2013 Washington Beer Awards.