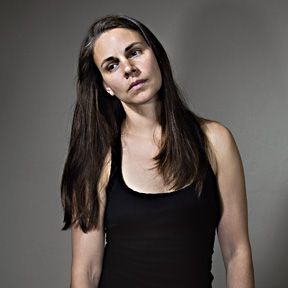 KT Niehoff isn’t normally the life of a party. Throw her into a roomful of strangers, she says, and she feels deeply uncomfortable. But turn said room into a raw, light-filled dance studio and said party into Inhabit—the charmingly disarming interactive piece she created and performed with her local contemporary dance company, Lingo, last May—and it’s safe to say she blossoms. “I am not a party girl,” says the 38-year-old choreographer and dance teacher, a little wryly. “[But with Inhabit] we were trying to figure out how to really engage with people.

In its five-week run at Capitol Hill Arts Center, the show–in which four dancers mingled with wine-sipping audience members, just like a normal cocktail party, while slipping in and out of solos and joint performances–left audiences and critics beguiled. (Most reviews boiled down to: “It’s hard to describe. Just go.”). For Niehoff, however, Inhabit represented a logical next step in a career spent making unexpected connections through movement.

In the mid-’90s, Niehoff, a Colorado native who studied theater at New York University, co-founded Velocity Dance Center–now the epicenter of the city’s formerly decentralized contemporary dance scene. By 2001, her then side project, Lingo, had gained a reputation for consistently stellar, envelope-pushing pieces such as Relatively Real, a show that she took on an international tour beginning in 2005. But touring the world with a show that had plenty of bells and whistles left her craving something more intimate, she says.

By dissolving barriers between audience and performer (her next show, still in the planning stages at press time, involves interacting with Pike Place Market-goers), Niehoff is both plugging into a rich avant-garde tradition and pushing the local contemporary dance scene in an exciting new direction. It’s the kind of party that’s only possible in Seattle, she says.

“Unlike New York or Chicago, where you’re just one of millions, you can make a deep impact [here]–which makes the struggle worth it.”