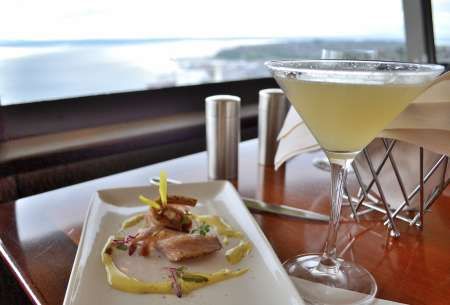 Awesome as it is, most of us usually feel like we need a good reason to have dinner at the Space Needle’s restaurant, SkyCity. Your Uncle Bob and Aunt Harriet are visiting from Muskogee. Your boyfriend wants to put a ring on it. Or, as in the case of Seattle magazine’s own editor Rachel Hart, there’s a first-grader in your life to whom you promised a Lunar Orbiter, the 50-year-old restaurant’s signature dessert, a completely insane-looking ice cream sundae that lands on your table in billowing clouds of dry ice like some alien calorie ship from a distant, colder moon that’s made of ice cream rather than cheese.

Until now, the Lunar Orbiter was the sole surviving item from the original early 1960s menu. But in honor of the Needle’s 50th anniversary festivities, they’ve brought back some other dishes from the past with a $62 five-course tasting menu ($62… 1962… get it?) featuring one dish from each decade, each created by a Seattle chef who embodies the culinary establishment of the time.

Representing the 1960s is current SkyCity Executive Chef Jeff Maxfield, who has resurrected another original (though slightly updated) menu item, Dungeness Crab en Brochette, with house made bacon, micro chervil and tarragon emulsion. Shiro Kashiba, our local godfather of sushi, who is presently enjoying a new moment in the sun thanks to the publication of his new memoir, represents the ’70s with his signature dish, Poke Belltown, a raw tuna salad in a creamy vinaigrette with scallions and orange tobiko. who was way ahead of the cocktail craze. She became the executive chef at Fuller’s at a time when women had to fight like devils for the same respect as male chefs (“they actually wanted me to wear a dress,” she says). Her cocktail is a gorgeously balanced standout on the drink menu, along with a fantastic warm spinach salad she created at Fuller’s with oh-so-80s smoked duck and shiitake mushrooms.

Tom Douglas was the obvious restaurateur for the ’90s, for throwing major weight behind putting Seattle on the nation’s culinary map. The notorious salmon fanatic brings the menu’s other star dish, his Aromatic Steamed Wild Salmon with kimchee fried rice and grilled asparagus with star anise and hazelnuts.

If I had to make the decision, the ’00s would have been a real tough one, given that notable restaurants are to this decade what funky, independent coffee shops were to the last. Ethan Stowell, McCracken/Tough, Scott Staples, Matt Dillon, John Sundstrom, and plenty more I can’t think of right now all would have made perfect sense.

But I love that the Space Needle folks chose Jason Wilson. Rather than build restaurant empires, the 2010 James Beard Award-winner has remained focused on his singular restaurant Crush, which, as a very sophisticated establishment that has blossomed within the walls of a Madison Valley craftsman home, is almost a perfect analogy to modern Seattle itself. Plus, I personally blame the man for spawning the entirely annoying early ’00’s All of this for a mere $62 puts this menu in the inner orbit of totally affordable, and, oh yeah – you have a front-row window seat on the most spectacular 360-degree view in all of Seattle (rainbow not included – I just got lucky). Uncle Bob, Aunt Harriet, your boyfriend and your first-grader might miss out – but for the month of May, you just don’t need them.