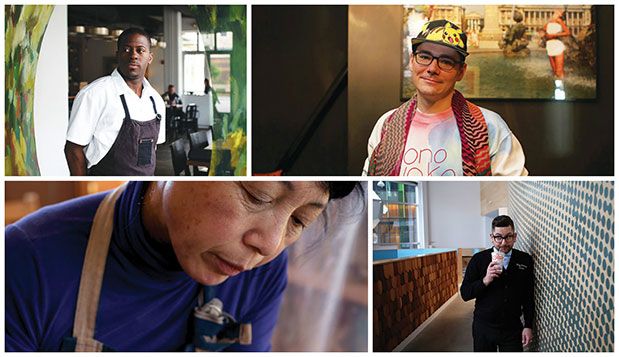 Mamnoon co-owner Wassef Haroun compares Jason Stratton’s culinary prowess to his epic karaoke chops. “He puts everything into it,” Haroun says. “When you see him perform songs, you realize he likes to do things very, very well.”

It’s certainly true in his role at Mamnoon. Middle Eastern culture is all about hospitality, after all, and 36-year-old Stratton’s mission since joining the team last July has been to promote that warmth as well as to showcase the depth and elegance of Syrian, Persian and Lebanese cuisines.

He definitely has the background. Stratton started in the kitchen at age 16 as a dishwasher for Bruce Naftaly’s Le Gourmand. After chef roles at Poppy and Cafe Juanita, Stratton juggled front- and back-of-the-house duties at Spinasse and Artusi before scoring a chef contestant role on Season 13 of Bravo’s Top Chef (though he didn’t make it to the end). Now, the Capitol Hill resident of 21 years is back, and at Mamnoon; he’s also helming the food and drinks program at the restaurant’s upcoming rooftop South Lake Union sibling, Mbar. Photographed on February 8, 2016, at Akiko’s studio in Burien
What do Dahlia Lounge, Cafe Juanita and San Francisco’s Coi have in common? Hint: It’s in the tableware, not the food.

When Akiko Graham, 61, first sat down at a potter’s wheel—at a Nathan Hale High School night class in 1989—she was simply looking for a hobby, something fun to do to tap into her background as a cafe owner in Japan while she was at home mothering three children. She took to the art immediately.

Now, her beautiful work—unique, purposefully imperfect stoneware pieces in delicately flecked neutral tones—act as canvas for some of the Seattle area’s most notable chefs: Holly Smith (Cafe Juanita), Tom Douglas (Dahlia Lounge), Shiro Kashiba (Shiro’s) and Blaine Wetzel (Willows Inn on Lummi Island), to name just a few, plus dozens more, such as Daniel Patterson (Oakland’s Plum), Melissa Perello (San Francisco’s Frances) and Charles Phan (The Slanted Door in San Francisco). Graham chooses the restaurants she wants to work with by analyzing the chefs’ artistry first; she has courted them by showing up in person and frequently sneaks in through kitchen’s back door after lunch service to avoid dining-room gatekeepers.

“I think food and dishes have a very important connection—in Japan, they cannot separate,” she says. “If the plates are very decorative, the food doesn’t show. From the beginning, I’ve just thought about the food. I need to make something I want to use.”
(Burien, 10847 Third Ave. S; 206.763.3108; akikospottery.com. Showroom open only during open-house hours; see website for
scheduled events.) There, in an open, friendly contemporary space flooded with afternoon sunlight, Jordan, 36, plays with Southern influences, French technique, seasonal produce, and local seafood and farm-raised meats to make a unique type of magic. The food here is lively, the flavors focused and full, with dishes so tightly executed that Jordan’s fine-dining experience—an 18-month stint at New York’s lauded Per Se under chef Jonathan Benno, whom he later followed to the “modern Italian”–focused Lincoln Restaurant—shows through. Take his extraordinary crab flan, lush and silken, which is made using the crab’s oft-neglected tomalley (brains, essentially) for depth of flavor. Or the fried okra appetizer, served with a burnt lemon-saffron aioli.

It’s a sunny, summery, utterly original take on a Southern staple. Jordan calls his food, simply, American. He says it’s an expression of who he is, what he’s seen and what he’s eaten all through his life. In the very best way, it’s just that. If you’ve ever spent an evening sipping Aperol Spritzes and playing “spot the yeti” at Westward’s bar, you’ve got but one man to blame.

As creative director for Josh Henderson’s Huxley Wallace Collective (huxleywallace.com), which includes eateries Westward in Wallingford and Quality Athletics in Pioneer Square, 38-year-old Matthew Parker spends his days (and many nights) building whimsical, unique dining experiences—from the name of a new restaurant to the feeling a guest leaves with after a meal. It’s all in the design.

“It’s a beautiful world we’re creating for the time we have you,” Parker says. “We’re always trying to push what we’re capable of, through both the design and the food we’re putting out, with every project.” And while Huxley Wallace is set to have its biggest year ever in 2016—Saint Helens (Ravenna), Noroeste and Great State Burger (both downtown) just opened; and Vestal, Poulet Galore and Cantine are coming soon to South Lake Union—Parker seems most excited about Scout, a restaurant they’re opening in June in the new Thompson Seattle hotel at First Avenue and Stewart Street.

Expect the sort of quirky details folks love about Westward with a decidedly Washington spin: plaid upholstery, big wood booths, a cabin for private dining reservations. Parker says, “Design-wise, this is going to be the best work we’ve ever done.”