The Allure of the Restaurant Walk-Up Window 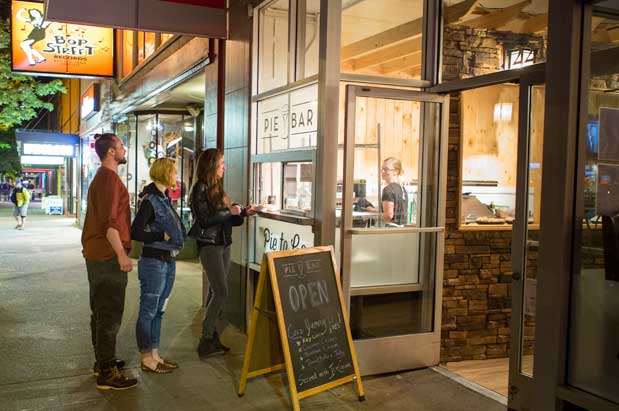 When I was young, my parents had a Chinese restaurant. In those years, I packed more takeout orders and walked more steps to and from the kitchen than clicks on a viral video. Had there been a walk-up window in the kitchen, it would’ve saved so much time and energy. Alas, it was not to be.

Later when I was the food editor at the Seattle Post-Intelligencer, covering the rise of the locavore chef/farmer community, I sometimes fantasized about opening a cozy space to serve quality home-style Chinese food. No, I’m not opening a restaurant. But if I were, I’d have a walk-up window because it blends the best of brick-and-mortar infrastructure with food-truck sensibilities.

There is freedom within the constraints of an edited menu and uncomplicated hospitality that’s framed by a window.

But we’re not talking about drive-through windows where you can get American-style fast food from the comfort of your auto. (Ironically, what’s considered fast food in many other countries around the world are dishes celebrated here as night-out experiences.) We’re talking about restaurants that are or could be full service that also have a walk-up window, and the purpose and allure of each window is as varied as the fare.

For Mamnoon (1508 Melrose Ave.; mamnoonrestaurant.com), the to-go window serves as an ambassador of modern Middle Eastern street foods. “If it weren’t for the takeout window, Mamnoon wouldn’t exist,” says co-owner Wassef Haroun, who, with his wife, Racha, wanted to create energy at the main entrance that would make passers-by curious about the deliciousness emanating from the street window and that would offer a low-risk way to taste foods that may be less familiar. “It was our strategy from the beginning to incubate street foods within the setting of a restaurant,” Haroun says. “And the proof is in the pudding.” Or the baba ghanoush.

The street window at Mamnoon is housed in the alcove of the main entrance, where there is also a small wooden bench, subway-tiled walls, an overhead space heater and handmade flatbreads hanging on a rack in the window. This is the siren song that leads you, perhaps, to a lahm bi ajine sandwich ($9), with lamb, onion, garlic, aleppo chiles and cilantro; and harra frites ($7), which are fries dusted with aleppo chile and parsley, and served with house-made ketchup and za’atar mayonnaise.

Everything is so aromatic and flavorful, you won’t be able to resist eating your takeout sandwich and fries before you get back to your destination. The street window belies the intrigue of the full-service dining room, where the soul of Mamnoon’s street menu gets dressed up. “We wanted to bring the street into our space…and people in the dining [room] get excited by the energy of the street-food window,” Haroun says.

The idea of incubating street-food concepts is not unfamiliar to Seattleites. Little Uncle (1509 E Madison St.; 206.329.1503; littleuncleseattle.com) and Kedai Makan (1510 E Olive Way; kedaimakansea.com), which offer home-style Thai and Malaysian foods, respectively, each began as pop-ups at local farmers’ markets and borrowed restaurant spaces before settling into more permanent locations. With their popular walk-up windows, they channel the spirit of hawker stalls, so ubiquitous across Asia, serving deceptively simple foods that jolt your taste buds into wanting more. On a recent visit to Little Uncle, the phad kra pao moo sap ($10.50) was the special of the day and consisted of sautéed minced pork with garlic, chilies and hot basil, topped with a fried organic egg ($1.10 extra) and served beside mixed rice. If you pretend that the cars zipping by on Madison Street are tuk-tuks (motorized rickshaws) and the Seattle gray is the searing heat and humidity of Southeast Asia, Little Uncle could be in Thailand near a beach or hidden in an alley.

Inspired by the street stalls across Asia that serve shaved-ice desserts—usually topped with sweetened red beans, fruits, syrups and other ingredients—Parfait’s (500 E Pike St.; 206.457.4622; troveseattle.com) Korean dessert walk-up window “truck,” installed at the entrance of Trove on Capitol Hill, immediately sets a spirited tone for the quartet of restaurants in one (noodles, cocktails, barbecue and desserts). Here, at this permanent stand (an ice cream truck built into the wall), you can order one of six “old school” or “new school” parfaits, such as the new-school mud pie, which takes house-made coffee frozen custard to new heights with cardamom cake, tahini caramel and toffee almond crunch ($6). I have been known to eat dessert first, so the fact that Parfait greets diners entering Trove just makes it that much easier to indulge a sweet urge.

Likewise, the brilliant walk-up at Pie Bar (Ballard, 2218 NW Market St., 206.535.8489, piebarballard.com; Capitol Hill, 1361 E Olive Way, 206.257.1459, piebarcapitolhill.com) serves pie by the slice through a petite window with a doorbell—though the featured pie-inspired cocktails are available only inside the bar. If you don’t have far to go, you can get your slice of pie warmed and served with a scoop of vanilla ice cream. Most options, including apple, strawberry rhubarb, sour cherry and mixed berry, are $8 per slice. Savory chicken pot pie or Gobble Gobble pot pie are $13 per piece. Co-owner Lyss Lewis formerly owned the well-regarded Seattle Pie Company, so those of us who long for those pies—such as the Deserted Island mixed berry pie—can satisfy our cravings here. (Call in advance if you want a whole pie.) While cocktails have an age restriction, pies can and should be enjoyed by everyone.

Across Market Street from Pie Bar is Sexy Alley Puffy Tacos (SAPT), the walk-up window of the Hotel Albatross (2319 NW Market St.; 206.566.6181; hotelalbatross.com), a bar and restaurant opened in the former Azteca space in Ballard by the owners of nearby Ocho and Hazlewood in April. The window, open evenings until late—no doubt playing to the Ballard pub-crawl crowd—is adjacent to an alley and peers into the dish-pit area of the Hotel Albatross kitchen. The menu features a San Antonio favorite, the puffy taco, which consists of fried masa dough that puffs up to create a shell that can be filled, in this case, with carnitas ($4). Fair warning: You will not have time to Instagram this taco before it disintegrates and requires the use of a fork.

Other menu items include the now de rigueur totchos ($8) and Mexican corn (market price). These foods are unabashedly meant for the late-night barhoppers, who need some substance to temper the imbibing. Hotel Albatross is in the midst of exploring different global street foods, which will undoubtedly influence the menu of SAPT.

For the downtown office dwellers, the new Tiffin (216 Union St.; wildginger.net) hits the right note for quick-serve bowl food that won’t break the bank. The culmination of owner Rick Yoder’s long-held desire to create an eatery that offers fast, healthy and affordable food, Tiffin is situated in what used to be the ticket booth for the Triple Door. The menu is a shorthand version of its older sibling, Wild Ginger, and appeals to folks on the go.

“It’s a whole different market of customers,” says Yoder, who added that business has been brisk, quadrupling in four weeks with zero marketing. He also believes that, as the city’s population becomes denser with time-strapped workers, there needs to be more options that address quality and convenience without breaking the bank. Tiffin offers a rotating menu of vegetarian, chicken, beef and pork dishes served over a choice of noodles, rice or mixed greens. Customers can walk up to the former ticket booth, now outfitted with a steam table to hold food, or order online. The beef rendang ($8) over brown rice consists of slow-cooked beef with cashews, carrot, garlic, ginger, shallots, chiles, lemongrass and turmeric in a coconut cream curry sauce.

It’s not meant to be high cuisine, just flavorful and hearty food, reminiscent of what you might find in a bustling Asian metropolis.
As real estate and labor costs rise, and global tech workers influence demand, restaurateurs are seeking alternative ways to connect with customers: They’re developing new algorithms, if you will, to capture the attention of a fractured dining public.

They’re also evolving the definition of street food, reinterpreting it in the same way that “upscale diners” took away the dubious greasy-spoon reputation of comfort foods.

“Brick-and-mortar restaurants, especially with rent and wage issues, are expensive to do,” says Yoder, who plans on growing the number of Tiffin locations. “People need a smaller footprint to make it more controllable. I’m always thinking about how I can do this simpler.”

Keeping it simple sometimes is the shortest distance to a diner’s heart.