Are Doughnuts the New Cupcakes?

Local foodies are giving doughnuts their (next) moment in Seattle history 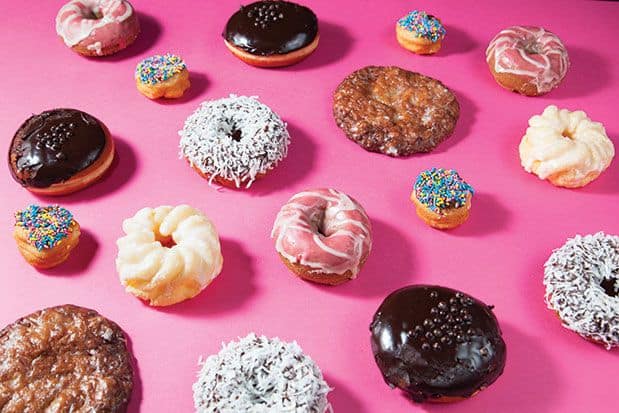 In the kitchen of her Ballard home, Renee Erickson lifts pillowy, freshly fried doughnuts from a pot of boiling oil. She rolls them in sugar and then—creating a gourmet version of a grandmother’s classic—fills them with purple swirls of huckleberry cream, lush lashings of intense coffee custard and other experimental flavors for the General Porpoise doughnut and coffee shop (Capitol Hill, 1060 E Union St.; 206.900.8770) she opened this past fall.

The star chef hated the ring-shaped treats during her brief tenure working at a Seattle-area doughnut shop years back. The lesson she learned there was “most things that go into doughnuts are disgusting,” like shelf-stable fillings in plastic tubes that could last for years.

On a stop at London’s St. John Bakery, though, her interest was piqued by the shop’s cult-favorite filled doughnuts, fresh and bright and “with some substance to them.” It seemed to be a niche that Seattle was missing, much like her experiences eating oysters in France prompted her to open her lauded The Walrus and the Carpenter oyster bar.

Erickson is hardly alone in seeing a new future in an old-fashioned favorite.

Walking distance from her cottage at the new, 2,500-square-foot Mighty-O Donuts café in Ballard (1555 NW Market St.; 206.547.0335), customers can watch a “donut robot” dropping dough into oil and lifting out the company’s made-from-scratch sweets, which are organic, vegan and made with non-GMO ingredients. Down the block from Mighty-O, Rodeo Donut (Ballard, 2052 NW Market St.; 206.701.6238) fries up a rotating selection of au courant flavors daily inside Cupcake Royale. Options range from a dreamy cinnamon-cardamom sugar enhancing the brioche dough to wackier options, such as the maple whiskey bacon and the spicy ginger blueberry. It didn’t take long after Rodeo’s March opening for a second branch to debut in Capitol Hill (inside Cupcake Royale, 1111 E Pike St.; 206.883.7656), and more are in the works.

Around the region, from Frost’s new Bellevue branch, scheduled to open this month, to Legendary Doughnuts in Tacoma—even hip Rachel’s Ginger Beer now offers the doughnut’s sugary cousin, the beignet—such elevated options have bubbled up like yeast and sugar.

“The nice thing is, doughnuts are getting a bigger reputation. But it’s not new,” says Ryan Kellner, founder of Mighty-O. The 15-year-old company spent its first years concentrating on a wholesale business and a single Tangletown café. Its recent surge—a major Tukwila production facility, the new Ballard shop and another shop opening on Capitol Hill—is the fruition of years of planning, growth and changes in the public’s palate.

“It’s the second wave, almost,” says Kellner. “It’s like grunge music—the real progenitors of it were in the ’80s, but the world didn’t hear about it until the ’90s.”

Rather than Dunkin’ Donuts franchises, Seattle’s specialty has generally been beloved family-owned shops along the old-fashioned-and-fritter lines of Countryside Donut House in Mountlake Terrace and King Donuts in Rainier Beach, both founded by couples who emigrated from Cambodia. The doughnut robot at Pike Place Market’s venerated Daily Dozen Doughnut Company is about as iconic as our fried dough got. 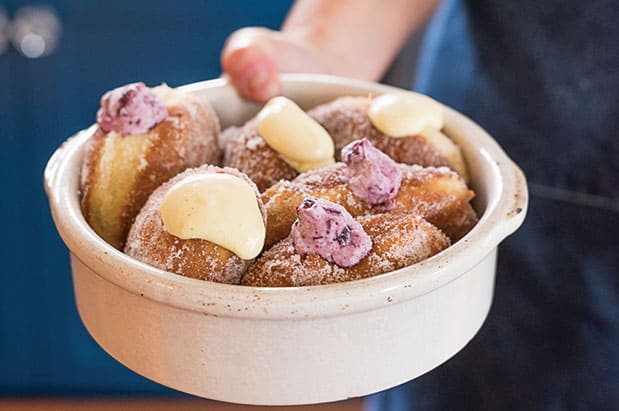 This new wave, however, began its rise when Seattle solidified its status as a center for independent artisan food.

Seattle landed in that sweet spot in about 2002, when Mark and Michael Klebeck opened their first vintage-style Top Pot café, thinking more about atmosphere than edibles. Their background was in designing spaces, “putting the labor of love into each of the places,” as Mark Klebeck put it, so when customers walked in, “it just felt different.”

But the “hand-forged” pastries they settled on as their focus were a match for the beautifully designed, book-lined cafés, with chocolate old-fashioneds and fancy delicacies like coconut-dusted “feather boas” drawing visitors ranging from President Barack Obama to food gurus Jane and Michael Stern. The business has grown to 19 cafés in Washington and Texas. Top Pot also supplies doughnuts to QFC and other supermarkets, with more expansion to come.

On a similar track to Top Pot came Mighty-O founder Kellner, a geologist by trade, and an entrepreneur. Talking with friends one day, the idea of making doughnuts came up—partly because one friend worked for Belshaw (now Belshaw Adamatic), the 92-year-old local doughnut machine manufacturer in Auburn.

“That’s a simple idea, a scalable model, very tangible…everybody loves doughnuts. Even the people who say they don’t eat doughnuts, eat doughnuts,” Kellner remembers thinking. “The doughnuts were a widget, but what really formed behind it was this culture.”

The culture Kellner sought was centered on care for the environment. He and his team developed an organic, vegan, non-GMO doughnut made from scratch. Instead of calling suppliers for chocolate icing, they had to order pallets of cocoa powder. The “doughnut frying shortening” on the market was a “gross” concoction of hydrogenated fats; onlookers told him he would never find a way to work around the unhealthy product. He did, opting for an organic, sustainably produced palm fruit oil. (It’s extracted from the “fruit” of the palm, he explains, rather than the problematic oil made from the seed.) And, while applauded by vegans, Kellner tries hard to go beyond that niche label. “I look at it and go, ‘Don’t marginalize us….We make a killer doughnut, bar none.’”

Mighty-O was an early supplier of markets such as PCC and Whole Foods, opening its first café in 2003. For all its innovations, Mighty-O’s flavors seemed downright traditional compared with outlets that have made the word “doughnut” trendy again, such as the caffeinated and bacon-studded specialties at Portland-based Voodoo Doughnut (which also opened in 2003), or stylish offerings such as elderberry cassis at Rodeo or blueberry-bourbon-basil at Portland’s Blue Star Donuts (which, like Erickson’s General Porpoise, was inspired by a trip to St. John Bakery in London). Our modern hunger for doughnuts seems two-tiered; it’s the Northwest template of scratch/local/seasonal cooking with an extra layer of experimental inspiration.

Taste-testing her latest batches, Erickson notes that doughnuts are also fueled by another eternally growing Seattle industry, a good cup of coffee. General Porpoise will serve beans from multiple roasters from her hot pink La Marzocco espresso machine. As for the filled sweets, “We’ll always have vanilla custard, chocolate—there are so many possibilities. Maple. Coconut. The more creative ones will be the jams; we can do chile or bay leaf or basil. We’re going to do a tomato one next summer,” she says. “Being someone who would not consider myself much of a doughnut eater, this is a doughnut I’m excited to eat all the time.”

To still-growing innovators like Klebeck, there’s enough dough to go around. In some parts of the country, he sees people relying on big corporate shops as the safest bet for good eats. Not in Seattle.

“I think we’re at a point in time right now where people want something better, and they’re willing to strive for that.”