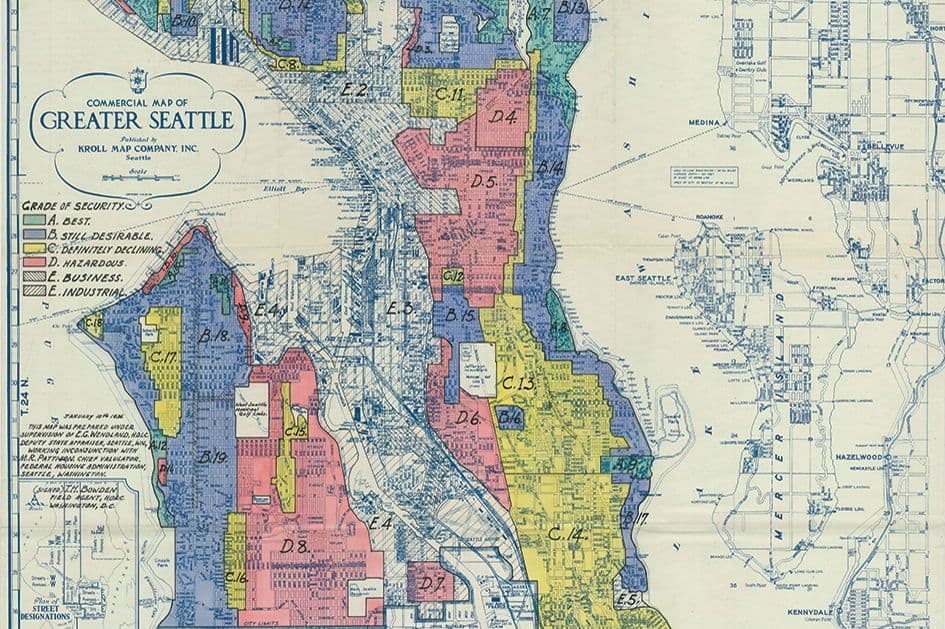 EXHIBIT
Excluded, Inside the Lines
Through 2/23/2020
One map in the Wing Luke’s exhibit Excluded, Inside the Lines, tells the story of Seattle’s ugly history of housing segregation: Areas are colored according to a “Grade of Security” and neighborhoods are overtly ranked as “Best,” “Still Desirable,” “Definitely Declining” and “Hazardous.” Guess where people of color were allowed to buy or rent? Personal stories and depictions of acts of resistance flesh out the tale of Seattle’s redlining past. Times and prices vary. Wing Luke Museum of the Asian Pacific American Experience, Chinatown–International District, 719 S King St.; 206.623.5124; wingluke.org

VISUAL ARTS
MadArt: Collaboration Between Dream the Combine and Clayton Binkley
9/23–12/7
Minneapolis-based Jennifer Newsom and Tom Carruthers work at the cusp of sculpture and architecture; for their most arresting pieces, they place large mirrored panels in natural settings, turning an open grassland or a stand of trees into a botanical funhouse of multiplied images. Watch their new installation take shape during MadArt’s open-studio period, starting September 23, and watch the gallery’s website for an announcement of the show’s formal opening date in early October. Times vary. Free. MadArt Studio, South Lake Union, 325 Westlake Ave. N, No. 101; 206.623.1180; madartseattle.com

THEATER
Indecent
9/20–10/26
Sholem Asch’s incendiary God of Vengeance is the play within a play in Paula Vogel’s 2015 Indecent. That performance tells the story of the closure of the show Vengeance, and the cast’s arrest on obscenity charges, after its 1923 Broadway premiere. (Asch set his play in a brothel, and that was only the beginning of what infuriated people about it.) Vogel (a Pulitzer Prize winner for How I Learned to Drive) packs the play, in its Seattle premiere, with challenging topics, including homophobia, anti-Semitism and the power and danger of art. Times and prices vary. Seattle Repertory Theatre, Seattle Center, 155 Mercer St.; 206.443.2222; seattlerep.org

FASHION
Seattle Style Month
9/10, 9/15, 9/25
The Museum of History & Industry is bringing its fun and lively exhibit Seattle Style: Fashion/Function (which ends 10/14) to a climax with a month of events, including a lecture presented in conjunction with the exhibit (9/10) and a Sunday Hat Parade (9/15), cosponsored with the Black Heritage Society of Washington State, which is an homage to the flamboyant “church hat” tradition. And don’t miss women of all sizes and shapes walking the runway at Big Mood: A Night of Fat Fashion (9/21), a celebration that includes a show, a market and live entertainment. Times and prices vary. Museum of History & Industry (MOHAI), South Lake Union, 860 Terry Ave. N; 206.324.1126; mohai.org

FESTIVAL
Bumbershoot
8/30–9/1
We all know the downsides to Seattle’s biggest arts festival: the prices, the crowds, the capriciousness of the weather. But there’s still much to be said for an event that ranges in aesthetic gravitas from a performance by Carly Rae Jepsen (her “Call Me Maybe,” you may remember, is the ear-candy single of the decade) to panel discussions sponsored by Design in Public. Times and prices vary (basic general admission ticket $109 per day). Seattle Center, 305 Harrison St.; 206.684.7200; bumbershoot.com Elton John comes to Tacoma as part of his two-year farewell tour. Photograph by Kevin Mazur/Getty Images for Rocket Entertainment

MUSIC
Elton John
9/17–9/18
After a half-century career, more awards and chart-topping songs than there are keys on your piano, the biggest-selling single ever and a biopic, you’re entitled to a little downtime—especially if you’re 72 and have two kids younger than 10. Elton John is taking more than two years to say goodbye in his hit-heavy, five-continent “Farewell Yellow Brick Road” tour, slated to wrap up in London on December 16, 2020. 8 p.m. Prices vary. Tacoma Dome, Tacoma, 2727 East D St.; 253.272.3663; tacomadome.org

VISUAL ARTS
Monet, Renoir, Degas and Their Circle
Opens 9/28
After the Seattle Art Museum’s Victorian Radicals exhibit winds up on September 8, pop down to Tacoma to see what those artists’ French counterparts were doing at the same time. The exhibit Monet, Renoir, Degas, and Their Circle: French Impressionism and the Northwest displays not only works by those masters but pieces by local artists who absorbed the Impressionists’ aesthetic freedom and innovative explorations of light and color. Times and prices vary. Tacoma Art Museum, Tacoma, 1701 Pacific Ave.; 253.272.4258; tacomaartmuseum.org

WORDS
Kim Brown Seely
9/17
The Kermode bear—more poetically dubbed the spirit bear—is a subspecies of brown bear with a gorgeous, slightly ruddy off-white coat found almost exclusively on a few British Columbian islands. Medina-based travel writer Kim Brown Seely set out to glimpse one for inspiration, to counteract the loneliness she felt after all of her children moved out. To add to the challenge, she and her husband, novice mariners, decided to buy and repair a sailboat and travel up there by sea; she tells the story in her first book, Uncharted. 7 p.m. Free. Elliott Bay Book Company, Capitol Hill, 1521 10th Ave.; 206.624.6600; elliottbaybook.com

THEATER
Indy Jones and the Raiders of the Last Temple of the Doomed Ark
Through 9/15
The title says it all: This stage mashup of three Harrison Ford blockbusters (this show is a “Crystal Skull free zone,” they promise), plus a dash of meta-commentary, is the latest uproarious spoof from Seattle sketch-comedy troupe The Habit (perpetrators of A Very Die Hard Christmas). Times and prices vary. Seattle Public Theater, Green Lake, 7312 W Green Lake Drive N; 206.524.1300; seattlepublictheater.org WORDS
David Guterson
9/10 and 9/19
Charity begins at home, they say, and so, it seems, do book tours. The Bainbridge Island native’s new book-length poem, Turn Around Time: A Walking Poem for the Pacific Northwest, embraces the idea of returning home, drawing an analogy between midlife stocktaking and that moment on a hike when you have to start the return journey. Accompanying Guterson’s reading on both dates will be a show of work by the book’s illustrator, Justin Gibbens. 6:30 p.m. Free. 9/10 at Seattle Central Library, downtown, 1000 Fourth Ave., 206.386.4636, spl.org; 9/19 at Bainbridge Island Museum of Art, Bainbridge Island, 550 Winslow Way E, 206.842.4451, biartmuseum.org An Iraq war vet’s memoir is questioned in People of the Book. Photograph by Rosemary Dai Ross

MUSIC
Tony Bennett
9/7
At 93, this ageless Mr. Smooth is the undisputed king of the Great American Songbook—and the sole surviving active vocalist from the days when that canon was still in formation. His secret? Imperishable tunes and young collaborators (Lady Gaga and Carrie Underwood, to name only two) to shed new light on them. His partner for this evening of song and memories is his daughter Antonia. 8 p.m. Prices vary. Paramount Theatre, downtown, 911 Pine St.; 206.682.1414; stgpresents.org

COMEDY
Marc Maron
9/7
In a career that’s embraced stand-up, comedy writing, and film and TV acting, this probingly self-questioning and self-revealing comedian is probably most acclaimed for his podcast, WTF with Marc Maron, which celebrates its 10th anniversary this month. On WTF, Maron has welcomed and grilled fellow comedians as well as guests ranging from Dan Savage to Barack Obama. 7:30 p.m. Prices vary. The Moore Theatre, downtown, 1932 Second Ave.; 206.467.5510; stgpresents.org MUSIC
Glen Hansard
9/24
Already popular in his native Ireland, Hansard caught the attention of America in a big way when he and Markéta Irglová played a musical duo (more or less, kinda themselves) in the 2007 indie drama Once, earning a Best Song Oscar for “Falling Slowly.” The April-released This Wild Willing is his latest solo album, which one reviewer said displays “a rawness that hasn’t been touched on in years.” 7 p.m. Prices vary. The Moore Theatre, downtown, 1932 Second Ave.; 206.682.1414; stgpresents.org

THEATER
As You Like It
Public Works Seattle puts a magic spin on classic Shakespeare
More than a community theater group, Public Works Seattle, the outreach branch of Seattle Rep, offers classes, theater outings and discussion groups intended to build a bridge between the stage and the people of Seattle. This fall’s show—the group’s second, following 2017’s The Odyssey—is a musical adaptation of Shakespeare’s play As You Like It, with music and lyrics by NYC-based singer-songwriter Shaina Taub. In this romantic comedy, love caroms like a pinball among the characters, and no fewer than four couples end up wedded by the final curtain. 9/6–9/8. Times vary. Free. Seattle Repertory Theatre, Seattle Center, 155 Mercer St.; 206.443.2222; seattlerep.org CELEBRATION
Community Homecoming
Town Hall celebrates its grand reopening with a packed month of special events
When the former Christian Science church on First Hill changed hands in 1998, the new occupant, Town Hall, instantly became one of the city’s most inviting and busiest arts and culture venues. Now, after a multiyear, $30 million renovation (including the addition of 17 gender-neutral bathrooms!) it welcomes the community back with a monthlong party. Nearly every day in the packed events schedule brings a new program. Highlights include: Labor Day with U.S. Representative Pramila Jayapal and former Secretary of Labor Robert Reich, who discuss Reich’s new book, The Common Good (9/2, 7:30 p.m., $5–$20); cherubic travel maven Rick Steves recounts the hunger-combating initiatives he witnessed on journeys to Guatemala and Ethiopia (9/8, 7:30 p.m. $5); and local collective TUF, an ardent voice for sexually, economically and racially marginalized artists, presents a showcase of music, performance and dialogue (9/21, 4 p.m., $5–$10). Town Hall, First Hill, 1119 Eighth Ave.; 206.652.4255; townhallseattle.org