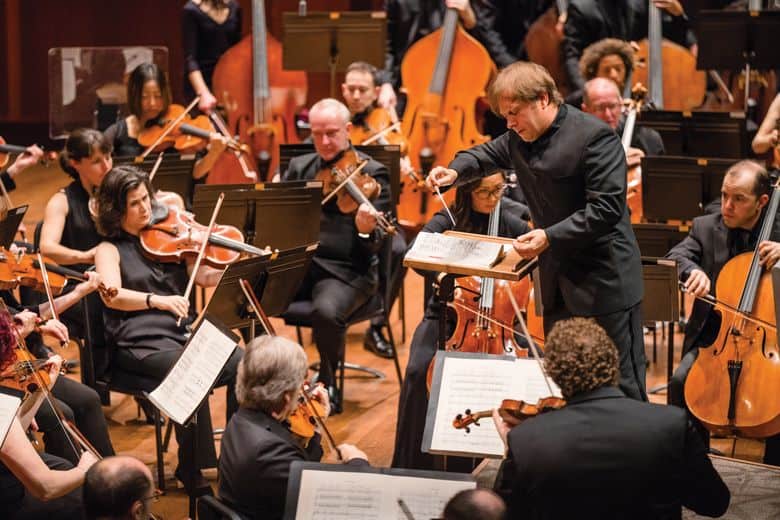 MUSIC
Ludovic Morlot’s Final Concerts with the Seattle Symphony
6/13–6/23
Morlot has conceived his two-weekend farewell to eight seasons as SSO music director as one big program, with music by Wagner, Debussy and Richard Strauss for June 13–15; then Wagner, Debussy and Leoš Janáček for June 20–23. As his last word before taking time off to study and guest-conduct in Europe, Morlot has chosen Janáček’s rarely played The Eternal Gospel, with its luminous and soaring closing chorus. Times and prices vary. Benaroya Hall, downtown, 200 University St.; 206.215.4747; seattlesymphony.org

DANCE
NW New Works Festival
6/12–6/16
Please, no patronizing euphemisms like “Rubenesque” or “zaftig”: Portland troupe Body Home Fat Dance lays it out there, creating performance opportunities for movement, body positivity and what it calls “fat-celebrating dance.” Its performers are among the many artists, from drag to flute improv, taking over On the Boards in its annual showcase of all things avant. Times and prices vary. On the Boards, Lower Queen Anne, 100 W Roy St.; 206.217.9886

THEATER
Pass Over
Through 6/23
Some people, per Beckett, wait for Godot; some, as in the Book of Exodus, wait for deliverance; and some, like the two young African-American men in New York playwright Antoinette Nwandu’s play, wait to see what happens when a white cop shows up. (Spike Lee has already made a film adaptation for Amazon Prime.) Times and prices vary. ACT – A Contemporary Theatre, downtown, 700 Union St.; 206.292.7676

WORDS
Solmaz Sharif
6/3
The devastation of war is perhaps expectably a frequent subject in this Stanford lecturer’s poetry, being that Sharif is the child of Iranian parents, but her 2016 collection, Look, a finalist for the National Book Award, also examines another sort of devastation: Her publisher, Graywolf Press, calls it “the insidious abuses against our everyday speech.” 7:30 p.m. Prices vary. Broadway Performance Hall, Capitol Hill, 1625 Broadway Ave.; 206.621.2230; lectures.org 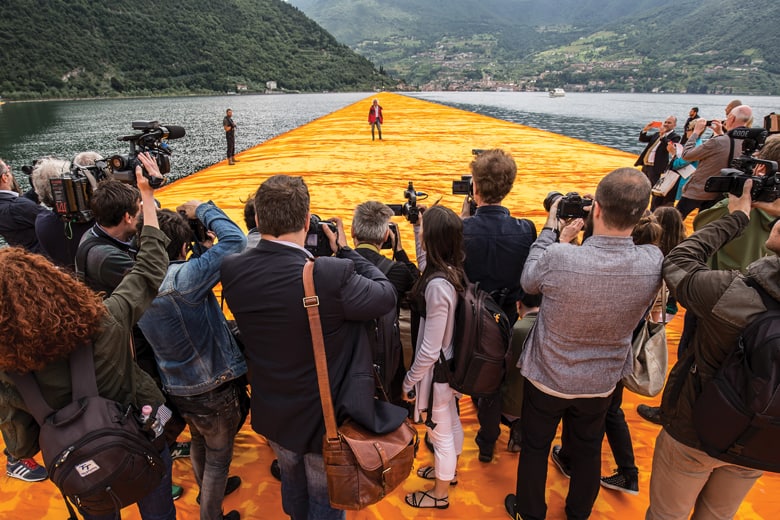 A still from Andrey Paounov’s documentary, Walking on Water, about the artist Christo. Photo by Kino Lorber

FILM
Walking on Water
Through 6/13
Whatever the aesthetic value of Christo’s immense public installations is, the logistics and engineering behind them are perhaps even more impressive. Andrey Paounov’s new documentary brings the audience right into Christo’s process as he plans, constructs and unveils “The Floating Piers” on Italy’s Lake Iseo while battling both bureaucracies and the elements. Times and prices vary. Northwest Film Forum, Capitol Hill, 1515 12th Ave.; 206.329.2629

COMEDY
Chelsea Handler
6/21
As funny on the page as on the stage, Handler founded her stand-up career on mordant confessionals of her hard-living past and has since expanded into a talk-show host, activist and documentarian, her comedy fangs as sharp as ever. The ticket price for this show includes a copy of her sixth book, Life Will Be the Death of Me. 8 p.m. Prices vary. The Moore Theatre, downtown, 1932 Second Ave.; 206.467.5510

VISUAL ART
Beverly Semmes
6/22–10/13
Since the early ’90s, Semmes has made installations out of oversize or otherwise distorted clothing—always prodding the viewer to muse on the female body evoked but never present. In her new work at the Henry, Six Silvers, her use of silver lamé in larger-than-life sizes radiates a sort of intimidating glamour. Times and prices vary. Henry Art Gallery, University District, 4100 15th Ave. NE; 206.543.2280

DANCE
Karin Stevens Dance
6/15
This local troupe will be a part of a worldwide collaborative day of dance (at press time, 60 performances in the U.S. and others on every continent but Antarctica) to bring attention to water conservation issues. Stevens’ troupe contributes Sea Change Within Us, a 60-minute work in the round set to a soundscape for piano, string quartet and spoken word. 3 p.m. Free. South Lake Union Park, 860 Terry Ave. N; karinstevensdance.com

WORDS
Ronan Farrow
6/5
If cultural changes could be measured on the Richter scale, Farrow’s October 2017 exposé in The New Yorker outlining Hollywood mogul Harvey Weinstein’s decades of sexual predation would be The Big One; the resulting seismic waves toppled icons thought untouchable, and the aftershocks will be felt for generations. Hear how he did it at this rescheduled lecture (originally for February 11) in the “Unique Lives” series. 7:30 p.m. Prices vary. McCaw Hall, Seattle Center, 321 Mercer St.; 206.733.9725; uniquelives.com

COMEDY
Hannah Gadsby
6/8–6/9
A year ago, Gadsby’s Netflix comedy special “Nanette” shattered everyone who saw it: jokes transforming into a de profundis soliloquy about the traumas of growing up lesbian in right-wing Tasmania, and the inadequacy of traditional stand-up tropes to address them. She accompanied Jill Soloway at her Temple De Hirsch Sinai reading last fall, offering sharp asides from, hilariously, behind a curtain. Now she’s back in town and out in the solo spotlight for a two-night stand. 7:30 p.m. Prices vary. The Moore Theatre, downtown, 1932 Second Ave.; 206.467.5510 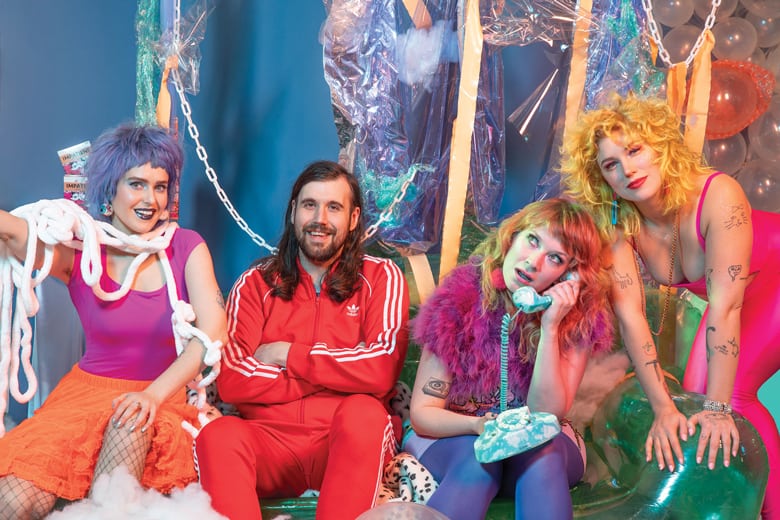 Tacocat released its fourth album in May; the band plays the Showbox this month. Photo by Helen Moga

MUSIC
Tacocat
6/8
This SDeattle quartet’s fourth album, This Mess Is a Place, came out in May on Sub Pop Records—a literal, and figurative, step up from Hardly Art, Sub Pop’s smaller imprint, which released the group’s first three albums. Always socially aware, the band members, like so many artists, found an abundance of material—to put it mildly—in the 2016 election. One representative lyric: “Truth spread so thin/It stops existing.” 9 p.m. $17. The Showbox, downtown, 1426 First Ave.; 206.628.3151

VISUAL ART
Jane Wong
6/1–9/1
Poet and Western Washington University professor Jane Wong’s family life was shaped by food: its presence, in the New Jersey Chinese restaurant her family ran; and its absence, in the unspeakable famines of Mao’s Great Leap Forward, which some of her family members witnessed. In an exhibit of poetry and personal memorabilia, After Preparing the Altar, the Ghosts Feast Feverishly, these two impactful events are tied together. Times vary. Free. Frye Art Museum, First Hill, 704 Terry Ave.; 206.622.9250; fryemuseum.org