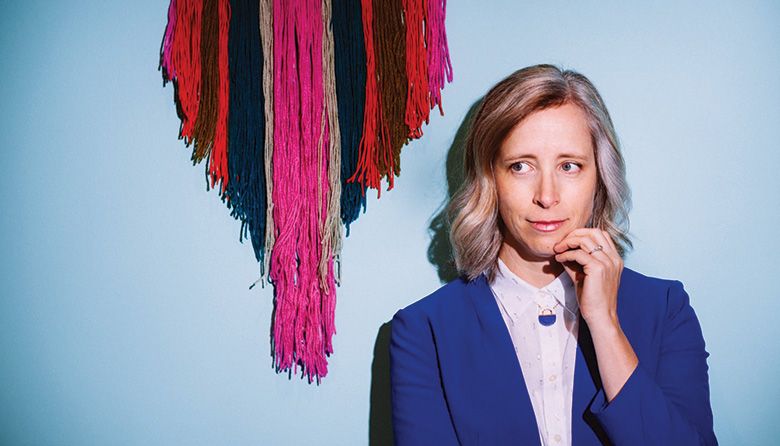 Editor’s Note: This story has been updated from the print edition to reflect the correct date of Canadian author Esi Edugyan’s appearance at University Bookstore.

FILM
Moving History
5/12
One problem with technological advances is that lots of important content gets trapped in obsolete formats, which is why it’s so cool that the nonprofit Moving Image Preservation of Puget Sound (MIPoPS) has stepped in to rescue archival material, from dance performances to industrial video. Check out some of what it’s saved in this quarterly archival movie night. 5 p.m. Prices vary. Northwest Film Forum, Capitol Hill, 1515 12th Ave.; 206.329.2629

OPERA
Carmen
5/4–5/19
It’s on the long side (three and a half hours), but otherwise Bizet’s earthy melodrama is the ideal opera for the novice. No matter how inexperienced you are, you probably already know at least three of the tunes, and the push-pull romance between the title character and Don José, the soldier she dangles on a string, will hold you in its grip just as he’s held in hers, leading to a punch-in-the-gut (or knife, to be exact) tragic climax. Times and prices vary. McCaw Hall, Seattle Center, 321 Mercer St.; 206.389.7676; seattleopera.org

VISUAL ART
Nepantla Cultural Arts Gallery
5/11–6/2
Opened in February in South Delridge, this new arts space is named for a Nahuatl—the language spoken by the Aztecs—word meaning, roughly, “in the middle,” referring to peoples on the cusp of two cultures and their strategies for resistance and survival. The gallery will host music and spoken word performances in addition to monthly art exhibits, and May’s exhibit will be an all-women’s showcase, Chingonas. Weds.–Sun., noon–6 p.m. Free. Nepantla Cultural Arts Gallery, West Seattle, 9414 Delridge Way SW; 206.697.0022

COMEDY
Bob Newhart
5/20
The greatest master of the deadpan take ever—he can do literally nothing and make it hilarious—Newhart has been a star for 58 of his nearly 90 years, through a Grammy-winning comedy album and a legendarily brilliant 1972–1976 sitcom. This “Evening with a Living Legend” is part of the Unique Lives lecture series. 7:30 p.m. Prices vary. McCaw Hall, Seattle Center, 321 Mercer St.; uniquelives.com

MUSIC
Music of Remembrance: The Parting
5/19
Discovered in his coat pocket when his body was exhumed from a mass grave, the final poems of love and resistance by Hungarian writer Miklós Radnóti (1909–1944) form the basis of this new one-act opera by Tom Cipullo and librettist David Mason. It’s the latest commission from Music of Remembrance, whose concerts keep alive the work of composers who fell victim to the Holocaust. 7:30 p.m. $55. Benaroya Recital Hall, downtown, 200 University St.; 206.621.2230; musicofremembrance.org VISUAL ART
May Flowers
5/2–5/31
This group show for Seattle artist collective The Drawnk, a follow-up to last year’s April Showers, is shape-specific: Each artwork is painted on a specific shape (last year’s April Showers show was raindrops; this year, it’s flowers). Expect colorful, whimsical work by the likes of Drawnk member and show curator Casey Weldon (co-creator of the SoDo Track mural “When It Rains, It Purrs”) and many others. Times vary. Free. Statix, Pioneer Square, 210 S Washington St.; 206.624.7948

MUSIC
Brandi Carlile
5/30
This show is part of a package deal for fans of the three-time 2019 Grammy-winning musician (in the categories of Americana Album for By the Way, I Forgive You, and American Roots Song and American Roots Performance for “The Joke”): Only through Carlile’s fan-community site The Bramily can you get tickets for this show, and only if you also pony up for her June 1 concert at the Gorge. Make it a double-Brandi weekend! 8 p.m. $43.50. Neptune Theatre, University District, 1303 NE 45th St.; 206.682.1414

FILM
Translations Seattle Transgender Film Festival
5/2–5/5
We don’t know what films will be screened (that information was under lock and key as we went to press), but what we do know is that this film festival, now 14 years strong and produced by local nonprofit Three Dollar Bill Cinema, with its mission to “strengthen, connect and reflect diverse communities through queer film and media,” will show titles that will spark conversation while dedicating space to the issues facing the transgender community. Times and prices vary. Northwest Film Forum, Capitol Hill, 1515 12th Ave.; 206.329.2629 Relive the hit ‘90s comedy when Friends! The Musical Parody comes to the Neptune. Courtesy of STG

MUSICALS
Friends! The Musical Parody
5/3–5/5
What were you doing the night of May 6, 2004? If you were like 52.5 million other people, you were watching the finale of this emblematic ’90s sitcom—and if you haven’t gotten over it since then, revisit it in this spoof, packed with your favorite in-jokes from all 10 seasons. Times and prices vary. Neptune Theatre, University District, 1303 NE 45th St.; 206.682.1414

DANCE
Ligia Lewis
5/17–5/19
Over four days, Dominican-born, Berlin-based choreographer Lewis and her colleagues present two of the three works from her Blue, Red and White triptych, exploring concepts inspired by those colors. Her 2014 work Sorrow Swag takes its cue from blue, “a point of departure to work through grief and sadness.” Her 2016 piece Minor Matter uses red, On the Boards says, to “material[ize] thoughts between love and rage.” Times and prices vary. On the Boards, 100 W Roy St.; 206.217.9886

Philanthropist Melinda Gates will discuss her debut book, The Moment of Lift: How Empowering Women Changes the World, explaining how the key to bettering a community is to provide opportunities to those who traditionally haven’t had them. (5/9. 7:30 p.m. Prices vary. McCaw Hall, Seattle Center, 321 Mercer St.; 206.733.9725; lectures.org)

Seattle artist Markel Uriu turns the hot-button political issue of immigration sideways in An Object Lesson (through 5/18). Her works on paper evoke invasive species of plants and animals introduced by humans into new environments—such as the European rabbit, the European starling and the zebra mussel—where they took over and wrought environmental havoc.

Romson Regarde Bustillo’s More than can be held (5/31–8/10) addresses transference in a more benign sense. His exhibit of prints, video, sound and performance was inspired by his Filipino forebearers (his family came to Seattle from Mindanao in 1978) and, gallery notes explain, the “networks of visual cues, codes and colloquialisms…employed by communities to negotiate, claim and reclaim space.”