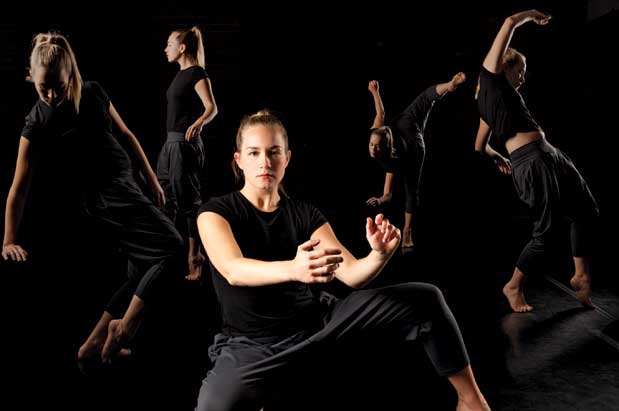 This article originally appeared in the September 2013 issue of Seattle Magazine.

Dance performances are often loosely described as “entrancing,” the word implying something akin to “compelling.” But viewers watching the work of Seattle choreographer Kate Wallich often actually feel as if they are going into a trance. “I hear that a lot,” says Wallich, 24. Whether a hypnotist or just highly skilled (maybe both), the 2010 Cornish College of the Arts grad is making a splash in Seattle’s thriving contemporary dance scene.

The YC, the company Wallich co-founded (in 2010), directs and dances with, has already performed at an impressive number of local venues, including On the Boards, Velocity Dance Center, Bumbershoot, City Arts Festival and Cornish. At each, Wallich casts her spell by combining slow motion and stillness with sudden bursts of rapid movement, alternately uniform and spastic, recalling both the group formations of classic modern dance and the individualized “popping” of break dancing. “I really like to play with pushing the audience,” she says. “We push the audience to boredom, then take them somewhere super-satisfying.”

With her breezy, confident manner, Wallich talks about her work in terms of world-building—worlds that spiral out from an image that catches her eye, often from film, photography and fashion magazines, the last of which she uses as notebooks for ideas. By way of example, she pulls out a copy of W and flips to a high-fashion spread featuring Tilda Swinton. Her handwriting covers the pages, articulating her thoughts about a new piece she’s choreographing for Seattle performance artist Kyle Loven: “outer space,” “rock concert,” “playlists.”

The music backing the YC’s performances—employing synthesized drones, industrial buzzing and haunting electronic chords—fills out the world (and the hypnotic effect). YC sound designer Lena Simon works closely with the choreographer from the inception of each piece. “It’s not just me saying, ‘Make a score for me,’” Wallich explains. “The dance and music are made together.” Add to this the video segments she incorporates into YC performances, and the result is highly cinematic. Wallich codirects these deliberately slow and richly atmospheric films with cinematographer Jacob Rosen, her boyfriend. She’s also tight with her four dancers (co-director Lavinia Vago, Erica Badgeley, Andrew Bartee and Matt Drews), and thinks of the group as a family. “The YC,” she says, “it’s like saying, ‘The Wallichs.’”

The parental Wallichs are in Tecumseh, Michigan, where Kate began taking dance classes at age 3. At 14, she had the self-possession to realize she needed more advanced training, and spent her last two years of high school studying ballet at Interlochen Arts Academy. She secured a scholarship to Cornish, where, she says, she made a big adjustment. “I had always dreamed of being a ballet dancer,” she says. “But I had to find myself as a person, not as a dancer.” Accordingly, Wallich started making her own work as soon as possible.

“Super Eagle,” the piece she’s currently developing into a 60- to 90-minute performance commissioned by Velocity, comes from a personal place. “It sounds ridiculous, but it’s about tragic love,” she says. “I have so much movement I’ve created, and I have all these concepts. Now I’m figuring out how to put them together into a narrative world.” She describes this world as “tender, sensitive, sweet, deceiving and backstabbing,” but is quick to clarify the narrative is nonlinear. “It comes out in an abstracted way,” she explains. “Everything has a glittery film all over it, so it’s not literal. I think it’s working.”
ONLINE: companywallich.com
UP NEXT: Wallich performs her first evening-length work at Velocity Dance Center, February 13–16. Meanwhile, catch her up close and personally at Dance Church, the open-to-the-public, Sunday-morning dance class she teaches at Velocity (velocitydancecenter.org).