By Gavin Borchert and Gwendolyn Elliott 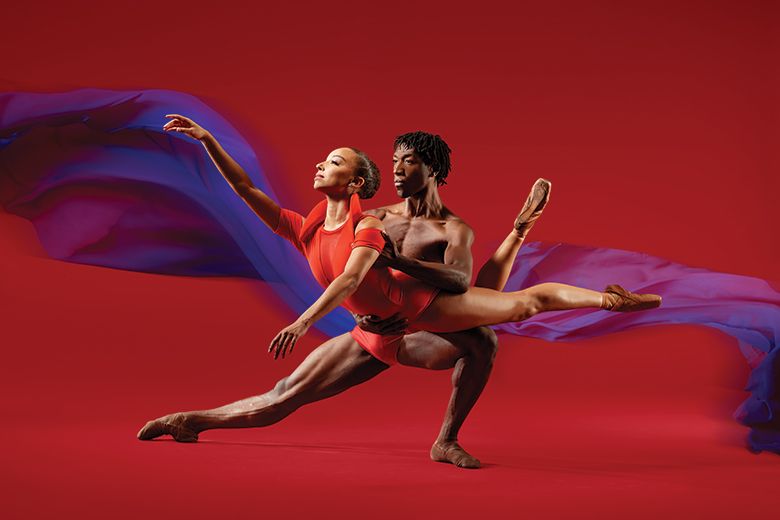 DANCE
Dance Theatre of Harlem
4/27–4/28
On the dance family tree, this company and our own Pacific Northwest Ballet are siblings. Three dancers from the New York City Ballet spread the legacy of its founder/choreographer George Balanchine: Kent Stowell and Francia Russell brought it here and created PNB, while Arthur Mitchell took it uptown to his home neighborhood, Harlem, cofounding Dance Theatre of Harlem and pioneering the inclusion of dancers of color in the classical ballet world. Founded in 1969, the company is celebrating its half-century this spring at home in NYC and on tour across the country, coupling works from its repertory with premieres commissioned for the occasion. Times and prices vary. Paramount Theatre, downtown, 911 Pine St.; 206.682.1414; stgpresents.org

FILM
Langston Hughes African American Film Festival
4/25–4/28
Even though Hollywood is inching toward greater on-screen and behind-the-camera representation of African-Americans, it’s probably less because of a sudden altruistic awakening than because it realized there’s money to be made. But films that might not be smashes on the level of, say, Hidden Figures, Black Panther or Get Out still need a home, and Langston’s 16th annual showcase gives them one—plus workshops, panel discussions and more. Times and prices vary. Langston Hughes Performing Arts Institute, Central District, 104 17th Ave. S; 206.684.4757

THEATER
Jitterbug Perfume
Through 5/12
It’s built shows around themes ranging from spaghetti Westerns to holiday murders, but dinner theater Café Nordo, now in its 10th season, hasn’t adapted a novel until now. Fittingly, it chose one by La Conner author Tom Robbins: Jitterbug Perfume, in which an ancient king seeking immortality meets rival modern-day perfumers, not to mention Pan the goat god. The specialty craft cocktails and prix fixe menu will relate meticulously to the theme—which, since the show is set in New Orleans, should be sumptuous and scrumptious. The original score is by Nordo’s resident composer, Annastasia Workman. Times vary. $99. Café Nordo’s Culinarium, Pioneer Square, 109 S Main St.; 206.579.6215 Courtesy of George Rodriguez and MadArt

VISUAL ART
George Rodriguez
4/8–5/18
For an art experience even more intimate than seeing finished work in a gallery, check out MadArt. The South Lake Union gallery invites you in by holding open studio hours (Tue.–Fri., 10 a.m.–5 p.m.) while works are in progress, to demystify (or maybe mystify even further?) the making of art. This month, ceramist George Rodriguez’s installation “Reflect and Gather”—built from thousands of individually handmade tiles—will be under construction from April 8 to April 24, with the opening slated for April 25. MadArt, South Lake Union, 325 Westlake Ave. N, No. 101; 206.623.1180 MUSIC
The Spring Quartet
4/26
In a sense, all jazz combos are “supergroups,” since everyone needs to be prepared to step up at some point as a star soloist; that’s just how jazz works. But a convocation this stellar is hardly an everyday event: legendary fusion drummer Jack DeJohnette, reed player Joe Lovano, pianist Leo Genovese and Portland-born bassist/vocalist Esperanza Spalding—who, you may recall, enraged millions of Justin Bieber fans when in 2011 she, and not he, won the Grammy for Best New Artist. 8 p.m. Prices vary. The Moore Theatre, downtown, 1932 Second Ave.; 206.467.5510; stgpresents.org

WORDS
Seattle Reads with Thi Bui
4/13–4/16
Author Thi Bui, who came to America from Vietnam in 1978, visits Seattle as part of the 21st annual Seattle Reads event. Her featured book, The Best We Could Do (2017), is a family memoir in graphic-novel form that addresses the timely topic of immigration and refugees, the horrors of the war and the struggles of assimilation. As The Comics Journal puts it, “Bui depicts, with unsparing candor, the multiple traumas associated with being forced out of one’s country into the unknown.” Details about Bui’s visit were sparse at press time; see library website for updates. Seattle Central Library, downtown, 1000 Fourth Ave.; 206.386.4636

VISUAL ART
Cecilia Vicuña
4/27–9/15
Exiled in London during the bloody Pinochet dictatorship in her native Chile, Vicuña has long focused on uncertainty and impermanence in her work, especially in her ongoing series of small, fragile assemblages of all sorts of found objects. In this exhibit, titled About to Happen, these vignettes, dubbed “precarios,” evoke, well, precariousness—an aesthetic that has also imbued her poetry, performance and film, and which more recently has been connected with climate change. Times and prices vary. Henry Art Gallery, University District, 4100 15th Ave. NE; 206.543.2280

WORDS
Nathan Englander
4/4
Being named a finalist for a Pulitzer Prize (for his short-story collection What We Talk About When We Talk About Anne Frank) is at the top of the long and growing list of honors earned by this Brooklyn-based writer, who visits Seattle for a conversation with Rabbi Daniel Walker, an event cosponsored by Elliott Bay Book Company and Temple De Hirsch Sinai. Englander’s latest novel, Kaddish.com, out March 26, takes a satirical look at the friction between tech and tradition, as the son of a recently deceased Orthodox Jew discovers that you can hire people online to mourn your dead. 7 p.m. Free. Temple De Hirsch Sinai, Capitol Hill, 1511 E Pike St.; 206.624.6600; elliottbaybook.com THEATER
Urinetown
4/6–5/26
Rare is the musical that becomes more timely with each passing year, but Urinetown—about a dystopia where, because of a severe water shortage, “It’s a Privilege to Pee”—follows the threat of climate change and environmental depredation to a cuttingly satiric conclusion. If you think that its blithe ultra-meta parody of music-theater convention (in this joint production by ACT and the 5th Avenue Theatre) will ease the blow of the message, think again. Times and prices vary. ACT – A Contemporary Theatre, downtown, 700 Union St.; 206.292.7676

MUSIC
The Music of Philip Glass
4/7; 4/26–4/27
Chicago-based quartet Third Coast Percussion plays a work commissioned in part by the soon-to-reopen Town Hall: Philip Glass’ Perpetulum, the first percussion-only work by the prolific 82-year-old. And the UW Vocal Theatre Workshop presents the Northwest premiere of Glass’ Hydrogen Jukebox, his 1990 chamber opera based on poems by beat poet Allen Ginsberg. His verse comments on American culture from the ’50s through the ’80s, but the opera’s title, a quote from his iconic “Howl”—“a state of hypertrophic high-tech, a psychological state in which people are at the limit of their sensory input”—is pure 2019. Perpetulum: 6 p.m. Prices vary. Benaroya Recital Hall, downtown, 200 University St.; 206.215.4747; seattlesymphony.org. Hydrogen Jukebox: 7:30 p.m. $10. Meany Studio Theater, University of Washington, 4140 George Washington Lane NE; 206.543.4880

THEATER
Always… Patsy Cline
Through 4/6
Based on the country diva’s real-life friendship with Houston housewife Louise Seger, this two-woman musical folds together excerpts from their letters and several of Cline’s hits: “Crazy,” “Sweet Dreams” and a couple dozen more. Seattle actress/vocalist Cayman Ilika, who’s played Cline often in assorted plays, cabarets and tribute shows, again takes on the challenge of channeling one of the greatest American singers ever. (And speaking of challenges, name a recording by anyone with more audible emotion in it than Cline poured into “Faded Love.”) Times and prices vary. Taproot Theatre Company, Greenwood, 204 N 85th St.; 206.781.9707 DANCE
Pacific Northwest Ballet: A Midsummer Night’s Dream
4/12–4/21
Four enchanted lovers combine and recombine, the fairy king and queen quarrel over a favorite, a (very) amateur theater troupe tries to put on a show: just another day in Shakespeare’s magic forest, as brought to life through George Balanchine’s choreography. The elfin score, taken from Felix Mendelssohn’s incidental music and a number of his overtures, is possibly the greatest ballet music never intended for a ballet. Times and prices vary. McCaw Hall, Seattle Center, 321 Mercer St.; 206.441.2424; pnb.org

WORDS
Morgan Parker
4/4
In her new collection of poetry, Magical Negro—whose title refers to the phenomenon Salon calls the “offensive movie cliché that won’t die”; cue Morgan Freeman as “God” or Will Smith as “Bagger Vance”—this prolific, prize-winning, degree-accumulating Los Angeles–based author, poet and arts organizer explores in expansive prose what has been described as “an archive of Black everydayness, a catalog of contemporary folk heroes, an ethnography of ancestral grief, and an inventory of figureheads, idioms and customs.” Parker reads from the collection. 7 p.m. Free. Hugo House, Capitol Hill, 1634 11th Ave.; 206.322.7030

DANCE
Spectrum Dance Theater
Dates throughout April
All artists want to stretch themselves, but the emotional leap Spectrum Dance Theater is taking in April under artistic director Donald Byrd is almost unfathomable. On two weekends—which it has dubbed The Wokeness Festival—the dance troupe is performing works exploring one of the most searing social and political issues of our time. Shot (4/10–4/13), which premiered in January 2017, offers an “unapologetic critique” of the epidemic of murders of black Americans by cops; and Strange Fruit (4/25–4/28) is based on the lacerating anti-lynching song by Abel Meeropol, made famous in a Billie Holiday recording. In between? The dancers get about as far from politics as dance can get in a salute to the beautiful, gnomic abstractions in the work of Merce Cunningham (4/18–4/20). A kid from Centralia who, after a few years at Cornish College of the Arts, rose to become arguably the century’s most groundbreaking choreographer, Cunningham built dance works based on the ancient Chinese divination method the I Ching (inspired by his collaborator and life partner, composer John Cage), liberating dance from story and mime.  Spectrum’s performances are part of a worldwide celebration of the dancer and choreographer on the centennial of his birth (April 16). Though, come to think of it, these three weekends are linked in a cruelly ironic way: Cunningham’s embrace of happenstance in his work is echoed tragically in the arbitrariness of whether a black person lives or dies in an encounter with the law. Times and prices vary. Spectrum Dance Theater, Madrona, 800 Lake Washington Blvd.; 206.325.4161 MUSIC
Third Coast Percussion
4/7
This Chicago-based percussion quartet brings a work commissioned in part by soon-to-reopen Town Hall: Perpetulum by Philip Glass, the first percussion-only work by the prolific 82-year-old. The title is the composer’s invented portmanteau of “perpetual” and “momentum”—adjectives that can aptly describe nearly all of his music, with its steady-state rhythms and hooky harmonic shifts. 6 p.m. Prices vary. Benaroya Hall, downtown, 200 University St.; 206.215.4747; townhallseattle.org

WORDS
Valeria Luiselli
4/17
Seattle arts & lectures presents this evening with Valeria Luiselli, the award-winning author whose work as a translator for Central American children applying to migrate into the U.S. inspired Tell Me How It Ends: An Essay in 40 Questions, her 2017 examination of the immigration crisis. The book is structured around the actual questionnaire children as young as 6 or 7 must answer at our southern border after their unimaginably grueling journey. As one NPR reviewer noted: “Answering each is like passing through a doorway covered in cobwebs that can’t be shaken off.” 7:30 p.m. Prices vary. Benaroya Hall, downtown, 200 University St.; 206.621.2230; lectures.org