This article originally appeared in the February 2015 issue of Seattle Magazine. 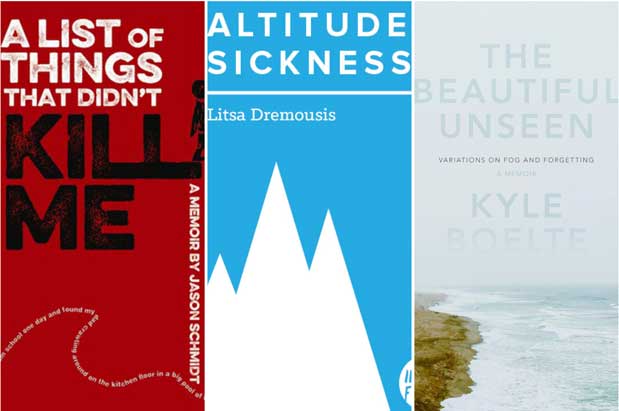 A List of Things That Didn’t Kill Me
by Jason Schmidt (Farrar, Straus and Giroux, January 2015)

From the opening line of the prologue, which grabs you by the hair and drags you into a blood-spattered home, this coming-of-age memoir is a page-turner. Schmidt recounts a harrowing 1970s and ’80s youth spent in Eugene and Seattle under the “care” of his highly unstable, HIV-positive father (and his father’s drug-dealing friends). Emotionally, the story is rough going, but Schmidt keeps his wits (and wit) about him, calling out ironies amid the horror.

This Seattle-based essayist has gained acclaim for her searingly honest (and bitingly funny) prose. In her first book, she takes a clear-eyed look at the story of her sometime lover, a fearless mountain climber who survived being mauled by a grizzly bear, but later fell to his death while summiting a peak in the North Cascades. As part of this recollection, which pulses with grief, anger and what-ifs, she questions the wisdom of climbing—as well as the phrase “He died doing what he loved.”

This debut memoir from a writer who recently relocated from San Francisco to Vashon Island blends poetic imagery with geographic history, meteorology and memory excavation. The author attempts to revive the fading image of his older brother, who hung himself in the family home when Boelte was 13 years old. With lovely, meditative prose, he explores how memories can be stubbornly obscured until suddenly, a long-ago moment reappears, as if a fog has lifted. Reading at Elliott Bay Books, 2/19, 7 p.m.