Our frustrating intersections are actually quite beautiful. 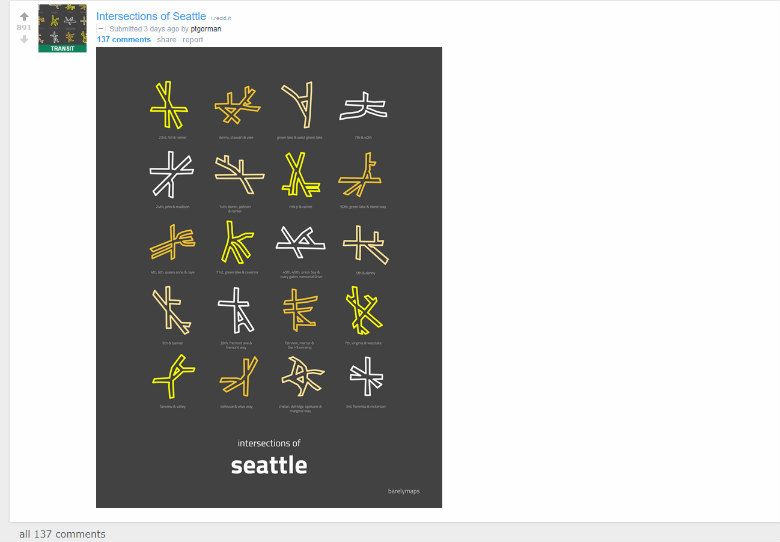 Whether you’re a native or recent transplant, at some point you’ve likely pulled up to a Seattle intersection and wondered if the city’s earliest engineers are trolling us from the grave.

Sure, our hilly terrain and abundant waterways present unique challenges. But why must some intersections look like a “jacked up” yoga pose called the “downward facing arachnid,” as a couple Twitter jokers put it?

Fortunately, a local man’s art might help us laugh off the dashboard-pounding rage we feel whenever Siri tells us to go “straight” at an intersection shaped like a Chinese character.

Since at least 2015, Seattle-based artist Peter Gorman has found beauty in maps, turning them into cool regionally focused prints he peddles through his Etsy shop, BarelyMaps. This week one of his prints lit up social media after Gorman posted it on Reddit.

Seattle was not the most carefully planned city… pic.twitter.com/tUmQjs4pgD

As befuddling as they may be, Gorman shows how cool our pretzeling roadways look from above. His print highlights 20 of Seattle’s most twisted, splintering intersections, from the Denny-Stewart-Yale tie-up to the crisscrossing Rainier Street and Martin Luther King Jr. Drive. (Check out a zoomed in version at BarelyMaps’ Etsy page.)

Or maybe you just like staring at neat squiggly lines.

Either way, peep Gorman’s Etsy shop and if you like what you see, toss him a few bucks for a print.