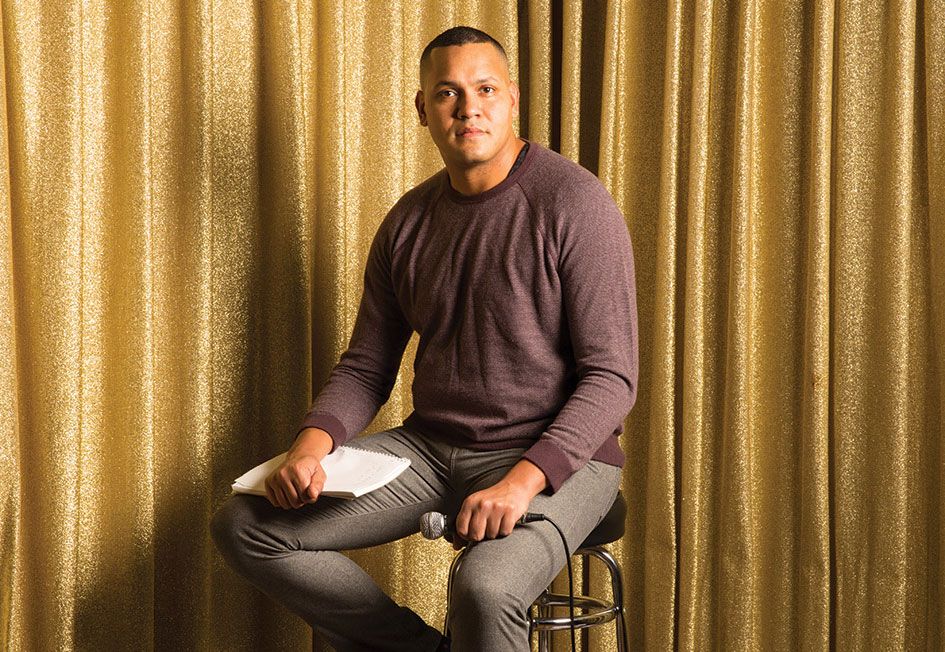 Squinting into the stage lights at On the Boards last August, Ahamefule J. Oluo glanced quickly into the audience, then dropped his chin to his chest, hard, and laughed. “Mom, did you have to sit right there?” he said, training his eyes on the front row, dead center. A loud, infectious laugh came right back at him: Of course she did. This was the first public performance of Oluo’s show Susan—the show’s namesake wouldn’t have missed it for the world, and she’s rarely missed a performance since. After a sold-out premiere run at On the Boards last December and a critically acclaimed January run at The Public Theater’s Under the Radar Festival in New York City, Susan comes home to play the Paramount Theatre on April 11.

Susan builds on Oluo’s first autobiographical work, Now I’m Fine, a fusion of original music, standup comedy and storytelling that centers on his father, who left their family when Oluo was an infant, as well as a horrific, baffling illness that plagued Oluo in his 20s. After spending so much time telling the story of his absent parent, Oluo realized he’d been overlooking the parent who’d stayed. Using his same hybrid form, now further refined, Oluo began crafting a story about the young woman from Kansas who was left raising two small children in poverty in the Seattle suburbs after her husband went to visit family in Nigeria and never came back. But, as Oluo makes clear in his telling, Susan’s story isn’t about what was lost. It’s about what was there.

“My mom raised us in a very chaotic environment,” Oluo tells me, not long after Susan’s On the Boards success in December of last year. It’s 11 a.m., and he’s still groggy after a terrible night of sleep precipitated by his sometimes-overpowering anxiety, but he perks up and into his funny, thoughtful self. “There was a large [extent to which] my sister and I had to raise ourselves.”

Oluo’s tumultuous upbringing is one thread of Susan, which weaves together stories from Susan’s youth, Oluo’s gentrifying Seattle neighborhood (“You meet a lot of new Jeremys!”) and a 2016 trip to Nigeria that Oluo made with a half-brother he’d never met until the brother showed up in Seattle for Oluo’s wedding. Parents and children figure heavily; the only joke repeated from Now I’m Fine is about Oluo getting a vasectomy at 22 after his second daughter was born (it’s funny when he tells it). Oluo admits he’d rather not publicly share his low points as a parent, which I won’t spoil for you here, but to ignore them would be a lie of omission. “This show has so many parallels between me being a parent and my mom being a parent, that if I’m going to share one of my mom’s worst moments as a parent, I should be willing to do the same about me,” Oluo says.

Describing the individual elements of Oluo’s artistic output is easy: He composes music, plays the trumpet (among other instruments), and writes and performs both standup comedy and narrative storytelling. Harder to quantify is the artistic alchemy between these mediums that comprise Oluo’s large-scale shows. Cowritten with Oluo’s wife, author Lindy West, and directed by Intiman Theatre artistic director Jennifer Zeyl, Susan is suffused with a kind of artistic umami that’s hard to pinpoint: melancholy standup, musical storytelling, a funny, emotionally honest whole that’s much more than the sum of its parts. And he’s not above a dick joke. Tiffany Wilson and okanamodé in Susan at On the Boards. Photo by Haley Freedlund.

Casually dressed and slightly stoop-shouldered in the manner of many very tall men, Oluo talks from center stage, jokes punctuated with the self-effacing chuckles of a standup comedian, painful stories left to land in silence. When the show’s language switches to music, he’s the trumpet player in an exceptional seven-person band, joined by equally impressive vocalists okanomodé and Tiffany Wilson. Susan shifts between story and song, intercut with recorded audio interviews with Susan herself, ebullient, hilarious and candid. Oluo recorded these conversations with his mom years ago, shortly after he’d been awarded a prestigious Creative Capital grant to develop Susan in early 2016, but long before the show felt real enough to affect what he and his mom revealed to each other.

“It’s so easy for a show like this to get fake, it’s so easy and tempting to try and construct a narrative,” he says. Resisting that impulse is nearly impossible in a work of memoir, but hearing mother and son chatting and laughing at each other on those recordings, you realize just how perfect that front-row interaction was. Judgment has no place in this complicated, shared life story. Get on board with that and you can laugh, remember and regret along with them.