The nonprofit organization supports projects where the two disciplines intersect 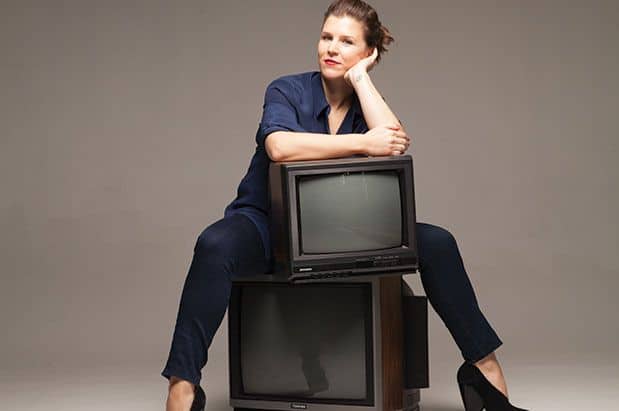 Julia Fryett, the director of Aktionsart, moved through the dark, graffiti-covered corridors of an abandoned school on Westlake Avenue in South Lake Union last fall. Wearing a black raincoat and holding a cup of coffee in her hand, she spoke about her current project. It was the last day the nonprofit organization would occupy the building. Fryett, who had worked as an independent curator and art adviser in New York for seven years, founded Aktionsart there in 2009 to support artists who use technology for positive social impact.

In Aktionsart’s various hidden rooms, a few video artists were wrapping up their work for the organization’s 13 Chambers, an anthology coproduced and distributed by Seattle-based Smarthouse Creative, set to be released this spring. Thirteen female directors each had been invited to create a short film within the constraints of the empty, soon-to-be-demolished building on the last weekend of Aktionsart’s tenancy; to produce what Fryett describes as “a response and archive of this space that will exist online.” Beyond the structure’s decaying, film-worthy atmospherics, the nearly 100-year-old building represented a disappearing Seattle surrounded by the new architecture of the tech industry.

Aktionsart first came to Seattle’s attention in the spring of 2014, when Fryett produced and curated the first Black Box festival, which features contemporary artists who expand the traditional parameters of cinema to include social media, holography, virtual and augmented reality, and other technology-based facets of life today. Like all of Aktionsart’s programming, the screenings, exhibitions, artist talks and discussion panels of Black Box—which returns this spring for its third iteration—took place in disparate locations across the city, including museums, shipping containers and the Westlake school.

“It’s imperative to think beyond the typical organizational structures of a gallery or museum,” Fryett says. “Aktionsart provides opportunities for artists to employ unconventional methods of production and new formats of presentation, with a focus on process.”

Last fall, the organization produced a quietly provocative work at the Westlake school site: a multichannel video installation made more significant by its proximity to Amazon.com’s global corporate headquarters a few blocks away. The blue-badged Amazon employees walking past the one-story building’s windows likely failed to notice the glowing monitors placed on the floor inside, which featured the tech industry’s most hidden, lowest caste of laborers.

The piece, titled “General Intellect,” was created by James Coupe, a British-born artist and current University of Washington professor, using Amazon’s Mechanical Turk, a crowd-sourced Internet marketplace where you, as a “requester,” can post a task and employ a “provider” to fulfill it. The tasks (termed HITs or human intelligence tasks) are typically mundane research actions for which providers are usually paid a few cents each (Amazon takes a cut of the transaction). Providers may be asked, for example, to fill out a survey, look up email addresses or write sentences describing items in photos; the ultimate purposes of their tasks are not disclosed. They work from homes across the globe and most are likely without better-paying employment options.

For “General Intellect,” Coupe posted a HIT requesting providers record a one-minute video each hour over the course of a 9–5 workday, for which they would be compensated a total of $3. Each clip included basic demographic information about the provider and a brief caption describing the provider’s activity. He received more than 3,000 clips and compiled them into a database that would appear on 18 monitors in several of the school’s classrooms in response to specific “database queries” he chose. As with any other tasks, the providers had no knowledge of their requester’s specific objective, and thus had no idea they were participating in a work of public art that was intended for sale to collectors.

Coupe’s piece, while complex, gives a sobering view into the private human experience at the confluence of globalism, technology, economics and labor today. The “General Intellect” clips, which range from the inadvertently intimate to the deliberately vacant, reveal a deep sense of isolation as startling as it is familiar.

Although the show ended in October, it found an unexpected new venue several weeks later when Aktionsart announced that it would be the first new media gallery on Amazon Art, the company’s online art marketplace, which generally offers paintings, photography and sculpture that can be purchased from a buyer and shipped to a seller, rather than conceptual or installation art. The arrival of such art on the website would itself be significant. But the fact that “General Intellect,” the work that exposed the company’s human back end, would now be for sale here made it even more consequential.

Collectors can buy (from $5,000; search Aktionsart at amazon.com/art) a package that includes custom hardware and software, a set of videos and a one-year subscription that will deliver new videos each week based on the collector’s unique query.

“The Amazon Art gallery is a venue that extends our exhibition program, acting as an educator and an online site for artists to test ideas,” Fryett says. “We live much of our daily life online, so naturally virtual space becomes just as important as brick-and-mortar exhibition venues.”