All the Holiday Events in Seattle You Can Handle 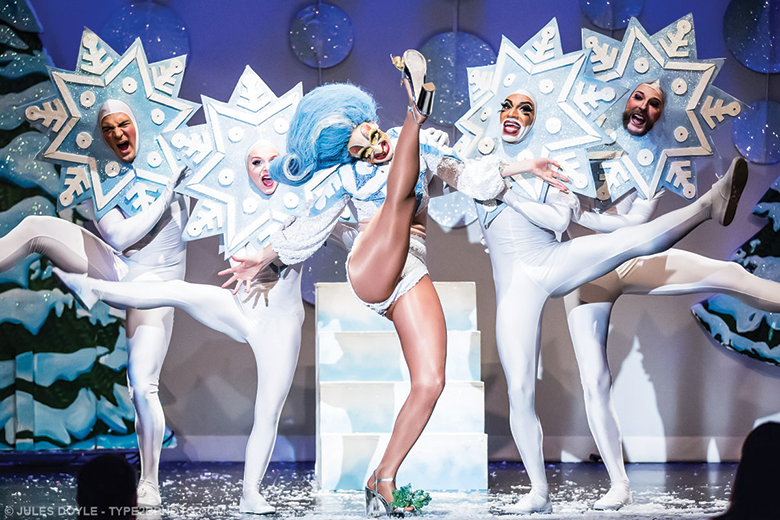 Nutcracker, From Naughty to Nice
The Nutcracker is 125 years old as of December 18. Luckily there’s an interpretation for every age and taste.

Land of the Sweets: The Burlesque Nutcracker
12/7–12/28
Lily Verlaine and Jasper McCann keep the traditional sparkle but spice up the sugarplums in this elegantly sexy retelling. Times and prices vary. The Triple Door, downtown, 216 Union St.; 206.838.4333

George Balanchine’s The Nutcracker at Pacific Northwest Ballet
Through 12/28 This is the most lavish local presentation, with Ian Falconer’s elegant storybook sets and costumes, and a charming video prologue to set the scene. Times and prices vary. McCaw Hall, Seattle Center, 321 Mercer St.; 206.441.2424

Evergreen City Ballet
Through 12/17
This production is presented in two formats: the full two-hour version and a special one-hour for the youngest audiences—which includes photo ops with the cast! Times, prices and venues vary. 800.514.3849

Tacoma City Ballet
12/15–12/23
The Nutcracker & The Tale of the Hard Nut adds some backstory to the traditional plot: How did the Prince become a nutcracker in the first place? Times and prices vary. Federal Way Performing Arts & Event Center, Federal Way, 31510 Pete von Reichbauer Way S; 253.835.7016 Keep it nice with PNB’s traditional “The Nutcracker.” Photo by Angela Sterling.

Snowflake Lane
Through 12/24
“The Most Festive Street in America” hosts a glittering nightly parade of ladies dancing, drummers drumming and who knows how many of the rest from The 12 Days of Christmas. Be there on opening night for Santa’s arrival and the tree lighting at Bellevue Place. 7 p.m. Free. Bellevue, Bellevue Way between NE Eighth and NE Fourth streets; 425.454.8096

A Christmas Carol
Through 12/28
Seattle’s premier stage version of the timeless classic will charm the Dickens out of you—and probably take on new resonance now that we have an administration seemingly trying to outdo itself in Scrooginess with each passing day. Timothy Piggee and Peter Crook share the lead role. Times and prices vary. ACT – A Contemporary Theatre, downtown, 700 Union St.; 206.292.7676

Elf the Musical
12/5–12/10
Boost your elf-esteem with this musical version of the 2003 cult movie, in which a human baby, accidentally raised as one of Santa’s helpers, returns to New York City as a grown-up to spread holiday cheer throughout a cynical town that sorely needs some. Times and prices vary. Paramount Theatre, downtown, 911 Pine St.; 206.682.1414

Holiday Spice
Kick it up a notch with these offbeat productions

Homo for the Holidays
12/7–12/30
The yuletide is indeed bright and gay in this riotous burlesque romp celebrating 10 years this season. The show features Waxie Moon, Cherdonna and many of the city’s brightest acts of the cabaret stage. Times and prices vary. Oddfellows Building, Capitol Hill, 915 E Pine St.

Ham for the Holidays: The Hamchurian Candidate
Through 12/17
The Hamchurian Candidate, Peggy Platt and Lisa Koch’s 17th annual seasonal sendup, brings back their favorite recurring sketch-comedy characters (see what the Sequim Gay Men’s Chorus has been up to lately) with a dash of trash and a big ol’ holiday helping of camp. Times and prices vary. ACT – A Contemporary Theatre, downtown, 700 Union St.; 206.292.7676

Cirque Dreams Holidaze
12/22–12/24
Put some Vegas glitz into your holiday with this music and circus spectacular for the whole family. Times and prices vary. Paramount Theatre, downtown, 911 Pine St.; 206.682.1414

Handel’s Messiah: Sing- and Play-along
12/26
The time to sit around and let other people entertain you is over, slackers. Bring your instrument or your voice and let conductor Karen P. Thomas guide you through the whole oratorio. 7 p.m. Prices vary. University Unitarian Church, 6556 35th Ave. NE