Is life at Amazon really all work and no play? You might be surprised to learn its employees are stepping away from their computer screens to make pickles, pottery and music 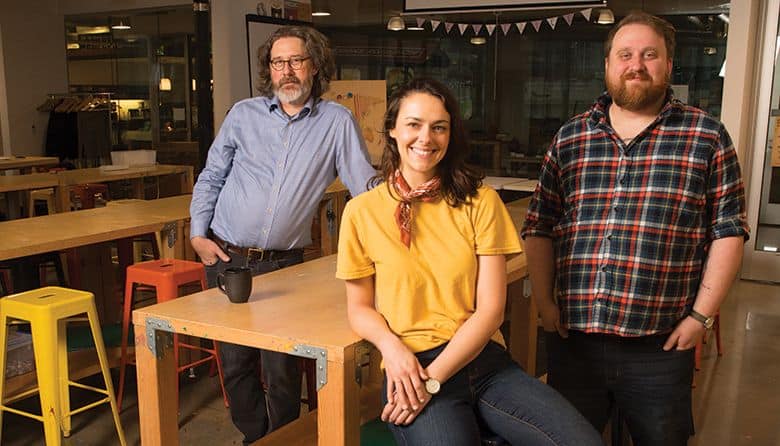 This article appears in print in the May 2019 issue and is part of our Amazon Arts feature. Click here to subscribe.

For better or worse, Amazon has reshaped the Seattle skyline: Since setting up shop in the city, more than 40 company-owned structures now dot the urban landscape, built to house an ever-growing number of employees. As these properties sprang up, forging a new identity for the cityscape, their interior spaces remained nondescript, blank canvases that Amazon’s many different work teams (“Logistics,” “Devices,” “Fulfillment”) were eager to personalize, as the company soon discovered. “There was almost too much blank space,” says spokesperson Lara Hirschfield, who noticed workers hammering posters, signs and other art onto the walls.

For all its innovation, Amazon hadn’t developed any infrastructure to channel the expressive side of its workforce. But in 2012, when the company partnered with students at Cornish College of the Arts to paint a concrete lobby floor in the style of various rugs, an idea was born. “There were so many cool expressions,” says Hirschfield of the designs that students presented. The project became the inspiration for the company’s creative program, Expressions. “The whole idea was to give employees a tool, a mechanism, a place for teams who wanted to root their identity in their new campus and new space,” Hirschfield says. AMAZON ORIGINAL: Resident glass artist Carol Milne in the studio across from the Expressions lab; supplies at the ready for Amazon’s many art classes

Hirschfield, who oversees Expressions and other cultural programs at Amazon, estimates that over 4,500—that’s more than 10 percent—of the company’s Seattle employees take part in the program. This includes experiences such as employee-led felting or needlepoint classes, and fine arts study (painting, sculpture, etc.) led by instructors from Gage Academy of Art and the Pratt Fine Arts Center. Employees looking for inspiration during the day can take a break and stop by the Expressions lab (an employee art-making space) in the Doppler building, at Seventh and Virginia, and work on a puzzle, learn 3-D printing or silk-screen T-shirts. They can eat lunch while watching one of the program’s artists-in-residence at work in a glass-walled studio across from the lab. If they can’t make it to Doppler, they can grab a crafting kit, such as for making snow globes or string art, from a mobile art cart. Tim Detweiler, former director of South Lake Union gallery MadArt and the Museum of Northwest Art in La Conner, helps things run smoothly as Expressions’ program manager, a role he’s held for more than two years. Among his various duties, he organizes regular field trips to local museums and galleries, including the Seattle Art Museum and the Frye Art Museum; works with local arts organization Shunpike to determine the four annual artists-in-residence (see sidebar below); and leads various art expeditions, such as an employee-painted mural project in the kids’ rooms at the family shelter Mary’s Place (Amazon is one of the shelter’s biggest financial supporters). Detweiler says he enjoys “helping [employees] get back into their hands…[and] I love the potential of Amazon getting out and doing some things in the community.”

Joseph Steininger, Expressions’ program coordinator, helps with the day-to-day operations of the program, a job that allows him, a stencil and spray paint artist, to keep a studio at Tashiro Kaplan Artist Lofts in Pioneer Square. “One of the great things I have found in this job is that when I want to try something, they’re very open to it,” he says. “When I wanted to offer a pickling class, Tim was like, ‘Go for it.’” Recently, the Expressions team has rolled out other classes, such as improv comedy and gnocchi making. The food classes in particular have been so popular that there is a plan to eventually launch a whole food-focused creative program, Expressions Kitchen.

“Whether it’s problem solving for a client or thinking of the next big thing, this is a place to try new things,” says Jennifer Tucker, a company program manager, artist and yoga instructor who leads Expressions’ monthly “Paint and Meditate” class. “Creativity and curiosity play in everything we do.”

Tjere’s a practical upside to Amazon’s efforts to nurture employee creativity (one of its core leadership principles is “Learn and be curious”). Some of it has to do with the mental stimulation that comes with a change of scenery, or how encountering a different way of thinking can provide an opportunity to consider new perspectives.

“Much of what happens here is a process; you don’t just stumble on the next thing,” says Hirschfield, who notes that mental and creative outlets are helpful for employees working through complex problems.

Reverberating beyond the badge-required halls of Amazonia is a bigger conversation about the company’s contributions—or lack thereof—to Seattle’s creative community as a whole, considering how much it’s altered the city’s physical and cultural footprint. But with local partnerships with the likes of Shunpike, Cornish, Gage and Pratt, the participation of respected local arts leaders, and a community of employees eager to access their creative side, is it time to give Amazon a little street cred, or are these gestures simply self-contained pings within the bubble of the Spheres?

Artists at Work
Amazon’s artist residency, open to artists from the Pacific Northwest, began in 2018. Each year, four artists are awarded $10,000 and free studio space for the 10-week residency. The artists donate one mutually agreed-upon work completed during the residency and keep the others. For 2019, there were 167 applicants, from which Carol Milne, Romson Bustillo, Casey Curran and W. Scott Trimble were selected. Resident artists for 2018 were Clyde Petersen, Markel Uriu, Celeste Cooning and Henry Luke.