Nancy Guppy gets self-ish with artist and gallerist Tariqa Waters 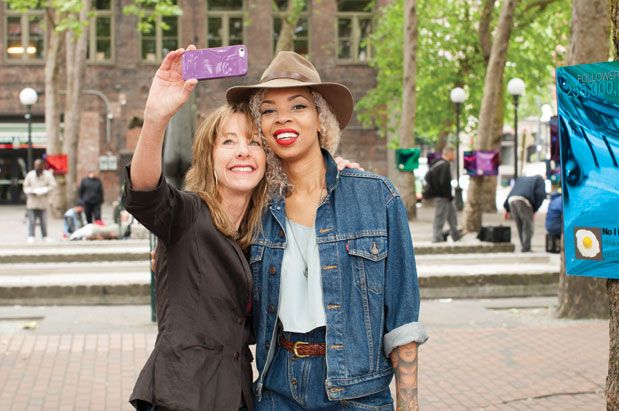 This article originally appeared in the August 2014 issue of Seattle Magazine.

New Pioneer Square gallery Martyr Sauce (122 S Washington St.; martyrsauce.com) is the size of a stairwell…because it is a stairwell, leading to the apartment where curator and painter Tariqa Waters lives with her husband and kids. What it lacks in square footage it makes up for in sheer cool, thanks to Waters’ keen eye and open-minded philosophy. See the space during First Thursday Art Walk (8/7), and also visit her mirrored installation, “No ‘I’ in Self,” in Occidental Park through September.

LOCATION: Caffè Umbria in Pioneer Square on a sunny Wednesday morning
TARIQA’s ORDER: Chai with a shot of espresso

NG: Describe the Martyr Sauce gallery space.
TW: Being from the Northeast, I see it as my stoop—the place where you sit, where you talk, where you collaborate. In Seattle, because of the rain, it’s an indoor stoop.

NG: How do you choose the artists represented?
TW: I like people with convictions, who have something to say in their art. I’m also goofy as hell, so you’ve gotta have a sense of humor.

NG: If you could represent any artist in the world, who would it be and why?
TW: Right now, it’s M.I.A. She has this very unpolished way of speaking her truth and she’s unapologetic about her sexuality.

NG: What gets you out of bed each day?
TW: When we moved to Pioneer Square, I saw it as Sesame Street. I wanted to be a part of the neighborhood and I wanted people to know me, so that’s the motivating factor. Just getting up and saying, “Alright, let’s see what’s gonna happen today.”

NG: What’s the idea behind your current show, “No ‘I’ in Self”?
TW: Everybody likes to take selfies, but when you take a selfie in front of the mirrors attached to the trees, the mirrors reflect what’s happening all around you. A selfie is more than yourself.

NG: You’re stuck on a desert island with one record, one food and one book.
TW: Stevie Wonder’s Innervisions. Something fried with a dipping sauce. And I’m
currently enjoying Charles Bukowski’s Ham on Rye.

NG: Describe yourself in one word.
TW: Deranged. (Laughs.) In a good way. I’m good crazy.