ArtsWest’s ‘An Octoroon’: Uncomfortable and Urgent

Intense and heady, 'An Octoroon' pushes us to examine race—and ourselves 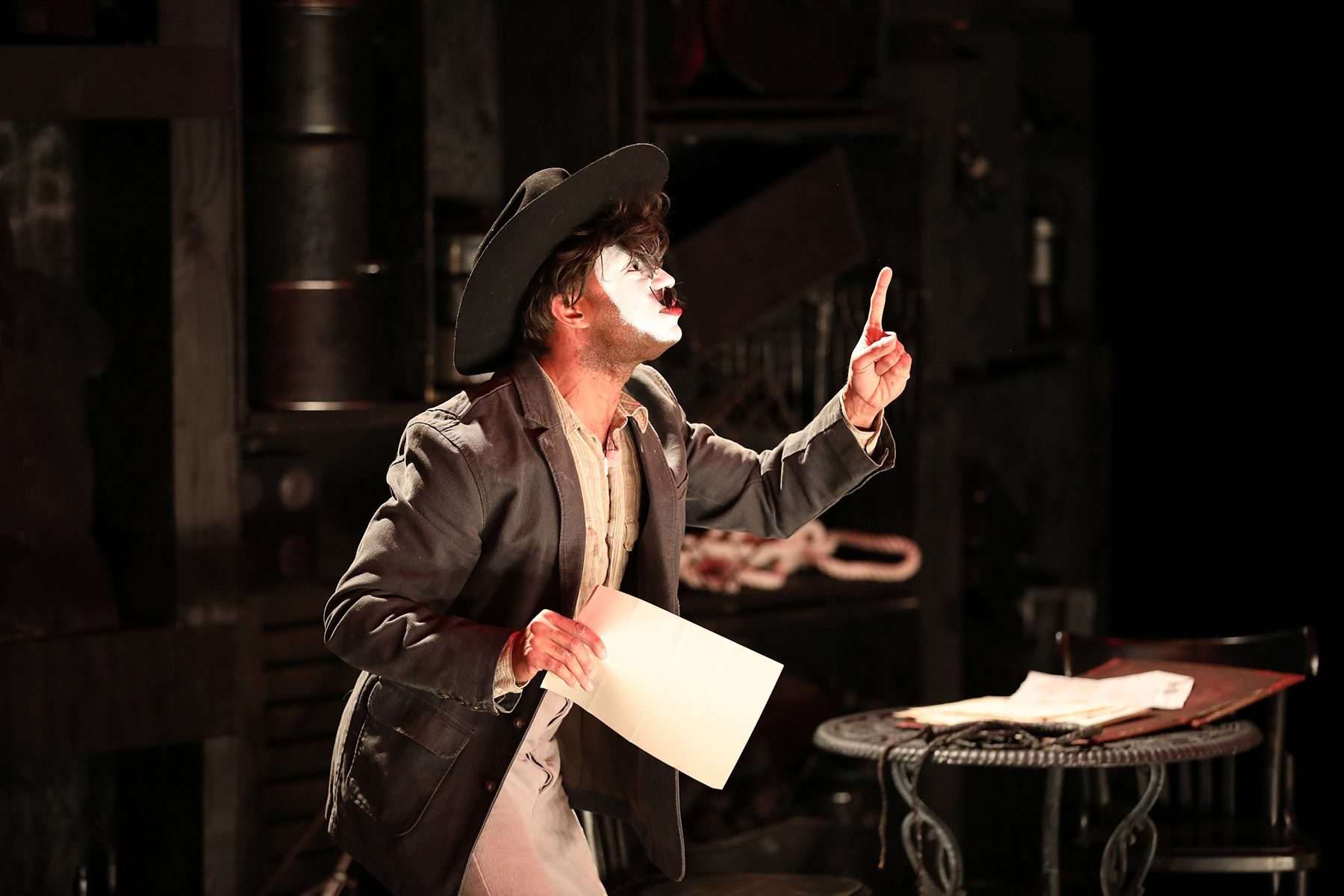 From the outset, An Octoroon toys with expectations. A lengthy prologue sets the scene—kind of—introducing viewers to the playwright, New York City’s Branden Jacob-Jenkins’ (BJJ; played by actor Lamar Legend, pictured above), who appears wearing only black Calvin Klein briefs. He begins a monologue about being a “black playwright”—everything that means and implies, to himself and others—and recalls the therapy session that birthed this very play, going on to casually apply white face paint (more on that later), chug whiskey and continue a string of thoughts that occasionally winks at “stuff white people say.” Eventually the audience learns the entire scene is an unusual storytelling device; there is no therapist or therapy session: “You people are my therapy,” BJJ declares, staring down the crowd and stalking off the stage.

Thus begins the very heady, meta An Octoroon, a deconstruction of Irish playwright Dion Boucicault’s 19th century melodrama The Octoroon, a name that once referred to a person who is one-eighth black. In BJJ’s version, here directed by Seattle’s Brandon J. Simmons, viewers are plunged into a drama taking place on a slave plantation, circa 1859, overdubbed with moments of clarity from BJJ’s life experience and visceral-yet-brilliant musings on the absurdity and horror of slavery and latter- and present-day racism.

The plot loosely follows Bouciault’s: George (played by Legend), arrives to his late uncle’s slave plantation, Terrebonne—a name that translates to “good earth”—to take over. George falls in love with Zoe (played by Jessi Little), the title “Octoroon” who cannot legally marry George. Overseer M’Closky (also Legend), however, knows that the estate is deeply in debt and wants to sell the property and steal Zoe for himself.

Kicked up around this basic premise is so much metaphorical “dirt” you can feel it landing on your face: Thanks to a liberal use of red- white- and black-face, actors switch races and perform interchanging roles. Legend plays three characters, as does actor Mike Dooly—including a particularly boorish turn as a past-his-prime Boucicault—and Jose Abaoag, among his both a child and an old slave. This trio forms the play’s most gut-wrenching unit of characters; in dialogue with the rest of the small cast, the n-word and racist stereotypes are tossed around so freely and often with such searing hatred or indifference it jolts every time.

Then there are moments when you question how to respond. Listening to three of the plantation’s female house slaves, for example—Dedra D. Woods as Minnie, Jéhan Òsanyìn as Dido, Jazmyne Waters as Grace—use contemporary language to gossip and crack each other up is often funny; but then you wonder: What, exactly, is funny here?

By the final act, in a unique meta-plot twist, Legend, Dooly and Abaoag play-act the final scenes as Legend interchangeably performs as BJJ, George and M’Closky and the trio in general tear down the fourth wall (along with something else), revealing, through a bit of stage magic (thanks to Julia Hayes Welch’s versatile and creative set pieces), a truly uncomfortable, unreconciled truth. In a play that tests all assumptions about what comes next, An Octoroon does deliver one concrete conclusion: how much more of ourselves we need to examine when it comes to race.