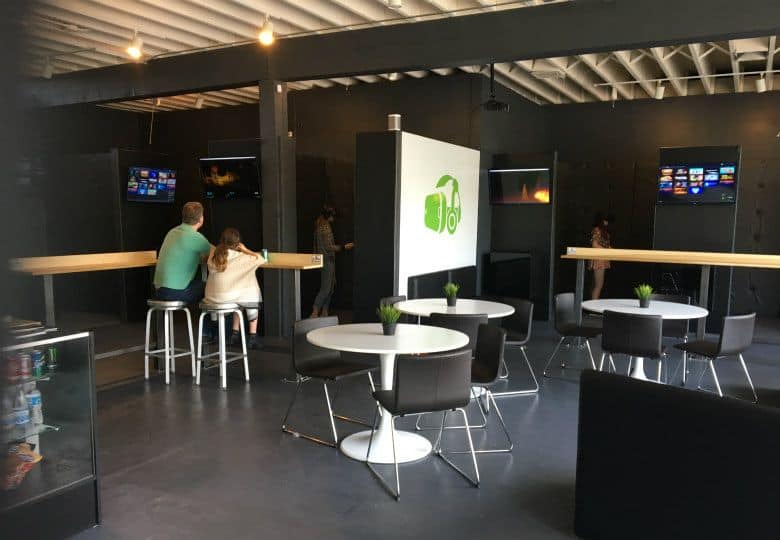 After six bottles of assorted booze, my vision is hazy and I approach the dozen or so patrons standing in one corner of the bar who are staring at me. Each of them ruddy, angry, their eyes vacant.

Yep, it is super weird and incredibly uncomfortable.

I hope one of them will start the imminent fight, but they don’t, so I must. I grab a barstool and chuck it at the herd, hitting a few in the shoulders or torso.

Fortunately, none of this is real. I’m not exactly the fighting type, but taking on a different persona is a big draw to the more adventuresome—and sometimes violent—games like Drunkn Bar Fight at the new virtual reality arcade in Ballard. Before catching a right hook from one of the digital menaces, I strip off my bulky VR headset and unplug from the game inside my padded vinyl cubicle. There are enough maladjusted bargoers in the real world (have you been to Capitol Hill?).

Harader and his wife, Page, opened Seattle’s first virtual reality lounge after experiencing the wildly immersive gaming style for themselves and realizing there was an unserved market here in tech-centric Seattle. Despite being located a few blocks away from Ballard’s bustling main drag (across the street from the Sloop Tavern), Tim says business has been good. Looking around at the diverse range of players—a family, tech workers and young adults—it’s easy to see why. Having a space that serves everyone (especially one that’s open late and sells beer) is a rarity when it comes to actually entertaining entertainment.

The more “intense” padded grey game cubicles, where there are few options appealing to my casual-and-anxious disposition, can be a bit much. Even the startup screen—a giant white room with a friendly, floating tutorial robot—had me overwhelmed. But The Lab, an explorative science lab of sorts, and the Google Earth game which tours some of the world’s most popular sights, were incredibly vivid and absolutely approachable.

After about thirty minutes of wearing the heavy, eye-straining headset, I came back to the real world as my spouse crouched on the floor, dodging bullets in the booth beside mine. A few cubicles down, a family took turns playing lighter teen-appropriate options like the supernatural Impossible Travel Agency.

Another man was obviously a regular, despite the lounge having just opened in April. He moved expertly through the world around him, shooting anyone who got in his way. I watched them all as their games played out on the screens outside each cubicle. At my request, my husband agreed to play Escape Bloody Mary for me—I certainly wasn’t about to play out a childhood phobia. As the apparition crept through the window in the tiny bathroom he was virtually locked inside, he was yelling—in our reality—expletives I won’t repeat. By the time Mary trapped him in her realm of horror (twice), it was midnight and we’d spent about two hours at Portal. Time flies when you’re living inside a video game.

At $29.95 per hour, (or $39.95 for a two-person shared time slot) Portal isn’t necessarily the most cost-effective gaming option in the city, but it’s a worthwhile experience for gamers and non-gamers alike. The staff are happy to help newbies and the family-friendly atmosphere is exactly what many Seattleites are looking for this summer while the kids are home. (A tip for non-parents: go later when the kids aren’t around; they’re open till midnight Friday and Saturday.)

And if you ever need to release a little aggression, there’s always a bar fight to be had at Portal.