Band of the Week: Dude York 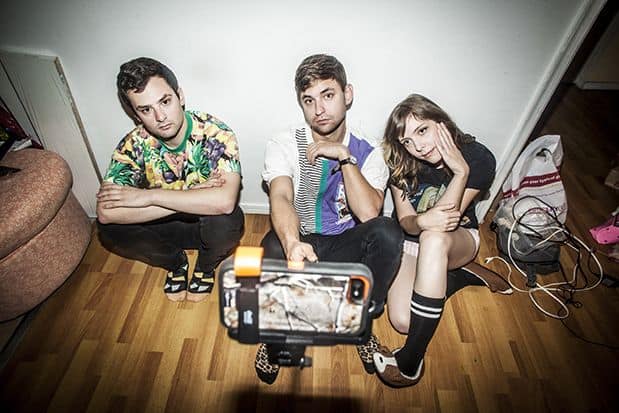 With so much happening in Seattle’s bustling music scene these days, how do you even know where to start? Allow the highly trained culture curators of Seattlemag.com to help with Band of the Week. This week, guitarist Peter Richards of indie rock trio Dude York takes a crack at our questions. His Hardly Art-signed group will release its new John Goodmanson (Sleater-Kinney, Bikini Kill) and Cody Votolato (The Blood Brothers)-produced album, Sincerely, this Friday. Dude York plays two release shows this week: this Thursday at Chop Suey and this Friday with a free in-store performance at Sonic Boom in Ballard.

In three sentences, tell us the story of your band: Andrew [Hall, drums] and I [Peter Richards; guitar, vocals] knew each other in school and started playing music together our senior year. Claire [England; bass, vocals] played in one of my favorite bands (Brite Futures/Natalie Portman’s Shaved Head) and they had just finished working together before we asked her to join us. She started playing and our sound immediately catalyzed, and together we have developed that a long ways from where we started.

Tell us about the new project! Sincerely has been a long time in the making, almost four years, and the care we put into the recordings is recognizable I think. It marks our first record wherein we started writing together as a band. That’s our strongest asset in my opinion, our unity and our chemistry as a band. Without that dynamic I don’t know where we’d be, but we’ve got it so there’s no telling where we’ll go.

What does being a musician in Seattle mean to you? Seattle is where Claire and I grew up so it’s very cathartic to be included in the region’s rich pantheon of musicians and artists. Seattle has traditionally been a unique music city, in that you have many chances to fail before you’ve burned all your bridges. In that respect, I think that the individuals making music and art here have the space to really explore themselves and enrich their voices.

What BIG question should we ask, and what’s the answer? Any question in caps lock will probably seen the biggest, and I suppose the answer would have to be in caps lock too. For musicians and artists the future is always the biggest question and in these grim times, the stakes couldn’t be higher. That being said, they say that the brightest light casts the darkest shadow, so I have faith in the people to stand up to each other.

What’s next? Hopefully some fun and successful tours next year and then a chance to record some of the many songs we’ve been working on for another album for Hardly Art! I can’t wait to get started! I love the work we’ve done on Sincerely, I think it’s our best work yet, but I always look forward to the next project even before the current one is finished. We’ve written some material that I’m really proud of and very excited for everyone to hear it, so stay tuned!