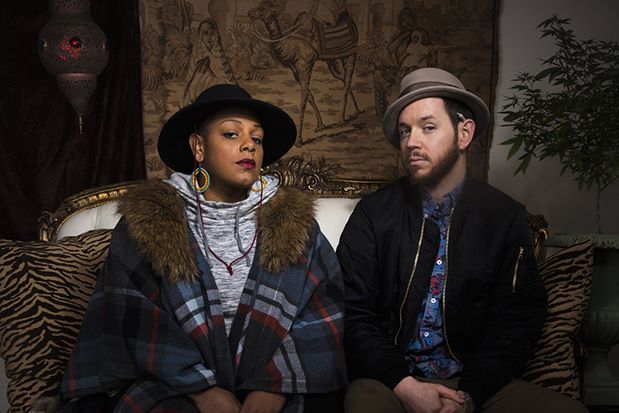 With so much happening in Seattle’s bustling music scene these days, how do you even know where to start? Allow the highly trained culture curators of Seattlemag.com to help with Band of the Week. This week, we catch up with Fly Moon Royalty, the city’s reigning R&B soul/funk duo that recently announced its last ever show (this Friday at Neumos, by the way). Here, vocalist Adra tells us more about the changes ahead.

Tell us about the new project (themes, inspiration, personnel, release details, etc.): Our latest release, Delicious Trouble, is our last FMR album, and really, it’s our best work released! So much thought and time and love [was] put into these songs, and a ton of amazing love and support infused into it, from the music and lyrics itself to the features to the mixing and mastering to the design to the people, period! This album is well rounded, and is available everywhere you can find music, pretty much.

What does being an artist/musician/band in Seattle mean to you? For me, I’m born and raised in Seattle, and it means that, even though I don’t always feel hella Seattle, I represent for my city, you know? (Hey, I was raised in a home with a southern grandma—I still don’t know what the Seattle Freeze is about, lol). It also means that your support from other artists and music industry folks can be really thick and awesome, but it also means that keeping the scene here is… well… harder. Things are changing, you know.

What BIG question should we ask, and what’s the answer? Why is Fly Moon Royalty calling it done? Everyone keeps asking! The answer is health. Here’s the thing: Literally, if you do not take care of yourself, you are no good to anyone, and when your body checks you on that, you listen. 2016 has taken so many individuals we love and look up to, and especially with the passing of the queen Sharon Jones, I mean, good goddess, you have to prioritize your health. I have not been good at that since forever, and now I must listen and pull back.

What’s next? Mike is working on a seriously dope new project—you’ll have to stay tuned for it! I’ve heard some of the tracks he’s working on and it bumps! And he’ll continue to produce and DJ. I am going to fall out of the scene some for most of the first half of the year, except for a few really special appearances: Whitney Monge’s album release at Triple Door on January 16th, Rock Lottery on January 21st, and Dear White People 2 at Theatre Off Jackson, February 24th and 25th (keep your eyes peeled here for more information). When I’m back in, trust me, everyone will know!