Band of the Week: Sisters

If you don't already, you're going to love this band 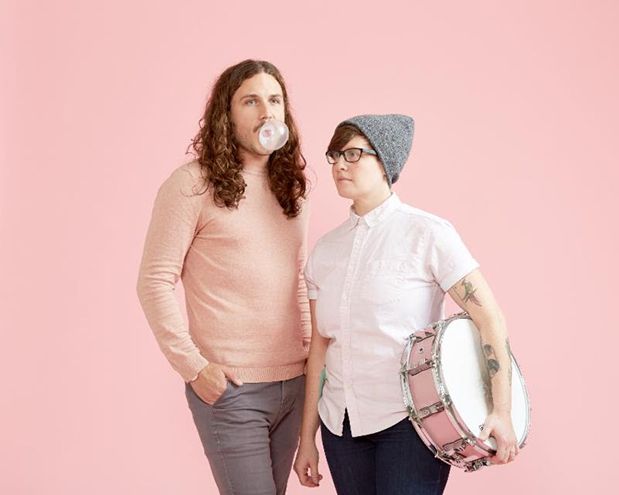 With so much happening in Seattle’s bustling music scene these days, how do you even know where to start? Allow the highly trained culture curators of Seattlemag.com to help with Band of the Week. This week, we talk with SISTERS, an electro dance duo with vibrant, infectious pop anthems and a beat- and synth-heavy sound stitched to soul-affirming lyrics. The band drops its debut LP, Drink Champagne, this Valentine’s Day and celebrates its release with a local talent-studded, two-night show February 16th and 17th at Sole Repair on Capitol Hill.

In three sentences, tell us the story of your band: We met while studying at University of Miami’s Frost School of Music and reunited here in Seattle through Seattle Rock Orchestra. We were like the bad kids in the back, always distracting the french horn players and whatnot, so one day, the conductor, Kim Roy [Emily’s wife] yelled out, “Hey guys, why don’t you start your own band?”. So we did, and we called it SISTERS.

Tell us about the new project and what you’ve been working on these days! We really just kinda love hanging out. It started in Andrew’s basement, where we chained up every mic and instrument cable we had like a couple of middle schoolers who just discovered their dad’s 8-track recorder. We worked up the songs for our EP, Diamonds of Gold, that way; just tinkering, you know? We started writing songs together shortly after and took the finished batch of songs to Bear Creek Studio and recorded them with producer Ryan Hadlock (The Lumineers, Ra Ra Riot, Cayucas). We’re releasing those songs as an LP called Drink Champagne on Valentine’s Day and we will be celebrating its release with shows at Sole Repair Shop on February 16th and 17th.

What does being an artist/musician/band in Seattle mean to you? We have so many great friends here who are artists of all varieties and these folks inspire us every day to be the best artists we can be. That’s the idea behind our release shows—we wanted to get some of our best musical buds in one room together to celebrate the work we’re all doing. We have Molly Sides from Thunderpussy, Bryan John Appleby, Marika Justad from Tangerine and Tilson XOXO for one show, and Manatee Commune, Galen Disston from Pickwick, Porter Ray and Minden on the other. We’re constantly humbled by the talent that surrounds us, and this is chance to give a little back.

What BIG question should we ask, and what’s the answer? Why can’t we all be more like Judy Garland? Just because, dammit.

What’s next? We can’t say just now, but it all looks absolutely thrilling.