Seattle author and food writer (and frequent Seattle magazine contributor) Jess Thomson explores the Northwest in her new book of essays, 'A Year Right Here: Adventures with Food and Family' 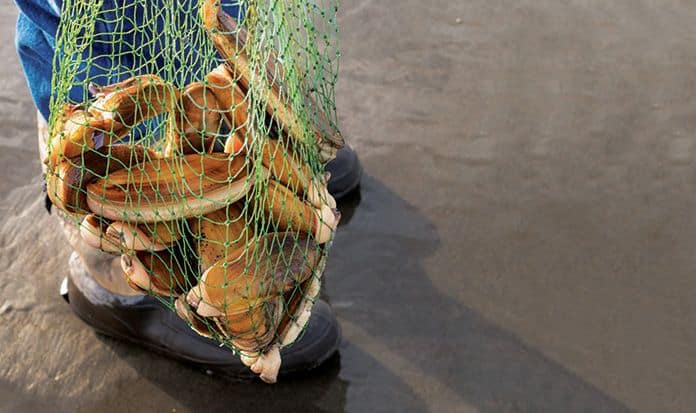 In the car, I turned up The Lumineers a little too loud and retraced our tracks down the same windy road, now shiny in an unusually bright February sun. I intentionally sped through gritty Aberdeen, hometown of the late Kurt Cobain, and back to the same shore, only farther south, past a church whose marquee read, “Clamming boots welcome at worship.” (Perhaps that’s what Cobain meant when he sang, “Come as you are.”) The two cop cars I passed ignored my attempt to channel my dad, which I thought was a bad sign, so I tried skidding a little too fast for my Outback onto the beach behind a stream of beefy pickups. Alas, the tires held. As I suited up—Xtratuf boots covered with my old ski gear, top to bottom—I tucked my good leather Rapha wallet into my jacket pocket, along with my cell phone, but left the pocket open on purpose.

The positive side of razor clamming alone is that you’re alone. Most people with kids will tell you that once you become a parent, there’s a unique value in anything you do without a small human clinging to you in some physical or even figurative way. I felt no different; with my husband gone so much, even the littlest slices of time on my own always felt rejuvenating. If you look for it, there’s an attractive liberty to closing the car door without watching out for little bodies or wayward toys. To eating your own snack first. To squatting down behind the car to pee in broad daylight, because your husband isn’t there to be modest for you, per usual, and your kid doesn’t need to pee first.

And so with the slam of the trunk, I set off happily toward a much more crowded beach, clam gun and square-sided yellow bucket and dishwashing gloves and all, this time with an extra veneer of freedom reflecting in the sun. 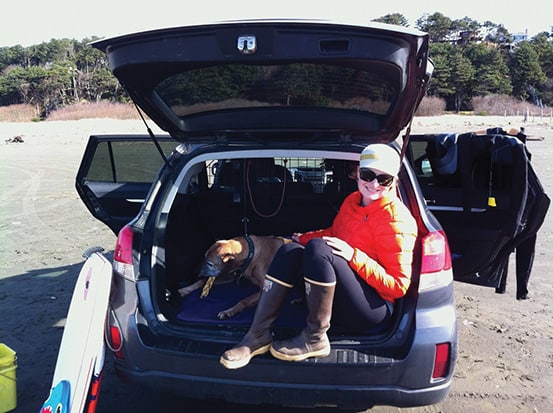 Photograph by Jess Thomson
The author, Jess Thomson, at rest after a clam-digging expedition

The negative side of going razor clamming alone is that you can’t rely on your own crowd to kibitz about where the clams might be, or even pretend you’ve just discovered the most perfect place to dig. My confident pace slowed as I neared the water’s edge and realized I had no clue what I was doing. I watched two women—one with army-green hip waders personalized with pink satin ribbons at thigh level, designed to mimic garters—dig clam after clam with apparent ease. Now, I’d dug for clams before. But the guy I’d clammed with, a burly man named Dan, was experienced. In fact, Dan runs the Washington Department of Fish and Wildlife’s entire razor-clam-studying operation. He’s like the President of Razor Clamming. So when I assured myself that I could lead a pack of newbies out into the sand to dig, I’d overlooked one small detail that was easy to ignore the day before, when there were no clams: Dan had shown me where to dig every time I’d dug before.

I meandered from show to show (or from what I thought was a show to what I thought was a different show), digging occasionally. Here, it’s worth mentioning that “digging” is a bit of a misnomer: It’s really a matter of pushing and pulling. The first time I plunged the clam gun into the sand, I expected it to squish through the way Graham’s shovel had that same morning—easily—but eight or 10 inches in, the granules get significantly more compact. When I decided the gun had gone as far as it was going to go, I pulled up, but the only thing that moved was a small muscle on the left side of my lower back. That moved a lot. I readjusted, panning the crowd to make sure no one had heard my squeak of pain, bent my knees, and copied the twist-and-wiggle motion I’d seen my new peers perform to prize the gun out of the sand. I emptied out the gun’s contents, repeated the process until I’d dug down to something that had the texture of Cream of Wheat, and kicked through the resulting sandpile to reveal exactly zero clams. Either my aim was off, or the clam was actually digging faster than me.

After 10 or so identical experiences, my self-esteem began to fade. It was suddenly junior high again, and the only thing that separated me from the cheerleading crowd, which was currently wearing puff-painted sweatshirts, hip waders, and mesh bags filled with filthy clams, was a four-inch mollusk. I had the wrong car. I had the wrong clam collector. My clam gun still had the sticker on it from the store, and I wasn’t coordinated or strong enough to use it. My ski clothes, which I thought were quite cool, were clearly the threads of a city slicker. Chances were good I was the only one who listened to The Lumineers. The ladies on the beach were still on Def Leppard, and not in an ironic way.

Just as the thought of giving up occurred to me, I noticed a group of guys standing shin-deep in the surf, scanning the sand for shows every time the tide rushed out. I thought again of my father, figuring that perhaps if the water topped my foul-weather boots, something good would happen. I quickly discovered that the advantage of standing at or below the waterline is twofold. First, because the water washes the sand clean with each tidal breath, you can imagine no one else before you has ever thought to dig in that particular place, and that an entire city of clams lies directly beneath your feet. Second, it’s where the jerks ignoring the rule that you must take every clam you dig, regardless of what your clam gun might do to one if you dig just a little off-center of the clam’s path, throw their mangled clams. And so, with a squeal of delight, I found my first clam—not by digging it up, but by rescuing it, squirming in its razor-clam version of pain, from where it was half-lodged in the sand in plain view. I marched it up to my bucket, plunked it into the bottom, and turned back to the beach. Ain’t no thang.

My luck improved. Fifteen minutes later, still standing at the water’s edge, I glanced in just the right spot as a three-inch-high fountain of water squirted out of the sand. I pushed. I pulled. The clam came out. Plunk. I didn’t care that the clam had essentially slapped me in the face to announce its location. I didn’t care that I’d taken a clam that would taste like PTSD. I had two clams. I scanned some more. An exceprt from A Year Right Here: Adventures with Food and Family (April 2017, University of Washington Press, $28.95)

Razor clamming is different from other forms of foraging in that when it’s busy, you almost always stand within easy speaking distance of other clammers. There’s not a lot of back and forth, but there’s a quiet camaraderie that rolls down the beach. I suspect that occasionally, folks can get competitive and cranky with each other over who gets to dig a show two people spot at once, but shockingly, no one seemed intimidated by my presence. As the sun started setting, people began dragging full mesh bags through the surf to clean their clams, then traipsing back to their trucks. Over the course of an hour or so, a few of those people peered into my bucket.

It was a skinny old guy in army-green chest waders. We’d been wandering close to each other for about half an hour.

“I’m pretty terrible at this,” I answered. It was a stock answer I’d used playing sports growing up. Before I knew I was probably always tired because I had lupus.

“Thanks,” I said, unsure of what else to say. I’d become a charity case.

And the second I said that, I spotted a new gurgle in the sand, plunged my clam gun in, and pulled out a fat clam. It was two swift, easy motions, just like in the videos online. The man smiled, and walked off down the beach. Plunk. I resisted the urge to chase him down, prostrate myself before him on the sand, and beg for digging lessons.

I bet that if I’d gotten my feet really wet, or clammed until midnight, or turned my jacket a little sideways so my wallet could fall into the ocean, I’d have reached my fifteen-clam limit. If I’d been stronger, maybe, I might have been able to dig as fast as the clams. But in the end, after about ninety minutes of digging, it was just those three plunks. I bounced back down the dunes in my station wagon, past the bullet-pocked beach driving regulations sign, through the depressed towns that filter-feed off passing tourists like myself.