Book-It Repertory Theatre’s ‘American Junkie’: In Seattle, a Fix Is Still a Shot Away 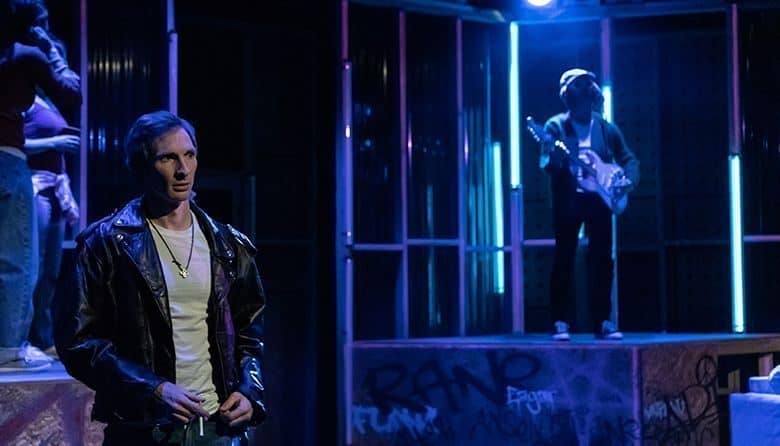 Actor Ian Bond stars as Hansen, guiding viewers back and forth across time through his story, from humble origins as the child of Norwegian immigrants and involvement in the anti-establishment punk scene, to his brushes with mortality and rehab. He is both a drug user and a drug dealer, complicit in the system but too heavily tangled to remove himself, as viewers learn quickly—and viscerally—from some scenes (terrifying and realistic portrayals of shooting black tar heroin, and rotting sores the size of softballs). But the drugs and addiction are just part of Hansen’s life, and what emerges in spits and starts, in and out of focus, is a complex, conflicted and deeply layered human being.

The play’s lack of intermission is a curious strength: the absence of a formal break means that the audience remains tethered to this world for nearly two hours, forced into an uneasy relationship with the storyline. With a soundtrack including Nirvana and Alice in Chains, it likewise speaks of our city’s homegrown musical talents, lamenting the promise of its front men who were gone too soon (music from local legend Jimi Hendrix helps supplement this connection). Casual name droppings of familiar venues and locales further helps draw viewers into the gritty reality of the Emerald City’s drug world. On the streets of Seattle, then as now, it’s a reality that’s not hard to see.

American Junkie offers no solutions or requests a call to action; instead it holds a mirror to a persistent social issue that as much as we would like, will not quietly fade away. While American Junkie is one man’s journey, Hansen’s character is an Everyman—the kind of person many of us have seen playing out some wretched scene in an alleyway or on the street. No one living in Seattle can deny the effects of the opioid crisis, but Book-It’s packed house when I attended proved Seattle audiences are willing to confront it, at least on the stage.