Can Seattle Return to its Former Bike-Friendly Glory?

Making Seattle more bicycle-friendly is tougher than you might think 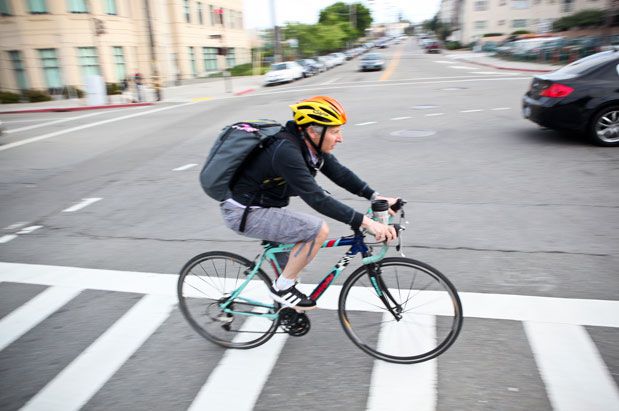 Anyone who negotiates Seattle on a regular basis asks at some point: Why can’t we just get around? It’s easy to blame geography—squeezed as Seattle is on a narrow, hilly hourglass isthmus surrounded by water—for our city’s transportation woes. But it’s much more complicated than that.

By complicated I mean that some basic, and not always pretty, elements of human nature have come into play to give us what we know today. And a little history and perspective are helpful as the $930 million transportation ballot measure, Move Seattle, heads for the November ballot.

An excellent, enlightening new book from the University of Washington Press is Bike Battles: A History of Sharing the American Road by James Longhurst, a bike-commuting associate professor of history at the University of Wisconsin, La Crosse. Longhurst looks at how cars came to rule the road. Bikes were here before cars, becoming the hot fad in urban transportation technology in the 1880s and for the next 30 years. Bicycles were cheaper and cleaner than horses. They freed men and women to go where they wanted when they wanted without having to hitch up a wagon or hop a streetcar. Bikes were liberating, thrilling and practical for the masses, and they made people physically fit, too. Once the so-called “safety” bike was invented—essentially the basic modern bike we know today with chain, brakes, triangular construction—America was off and pedaling.

The popularity of cycling in the late 19th century was a national phenomenon, and one embraced by the emerging cities of the Pacific Northwest. We had multiple cycle tracks for racing, bike police and mass recreation rides. Bike clubs sprouted and so did the demand for improved, rideable roads. Portland, Spokane, Seattle and other cities in the region and across the country started building bike trails, bike lanes and even bike-friendly infrastructure, such as bike bridges. The Queen City Good Roads Club worked with the city to make Seattle bikeable. Club members worked to expand and pave the streets—many of which were little more than horse-poop-fouled mud wallows.

By 1900, Seattle had more than 20 miles of dedicated bike paths connecting every part of the city. It was possible to bike to work from Pioneer Square to Ballard. In the early 1900s, University of Washington students lobbied to improve bike-commuting conditions along Eastlake and Lake Union. We could have done more. Longhurst writes about the movement of the era that sought to use public money—fees and taxes—to pay for bikes-only paths (known as sidepaths) within cities and connecting cities. Imagine a bike path from New York to Chicago and beyond, a kind of interstate highway system for cyclists.

In the 1890s, many states passed legislation permitting the construction of sidepaths. In Seattle, two entrepreneurs tried to build a dedicated private bike toll road from Seattle across the Duwamish tide flats all the way to Tacoma, linking two of the Puget Sound region’s most rapidly growing cities and active cycling meccas. They did manage to build several miles of the route, but the scheme flopped financially after a couple of years. Sidepaths soon became tangled in legal disputes over differing views about whether the general population (e.g., non-cyclists) could be taxed to fund bike-only paths, or whether bike taxes or licenses themselves were even legal. Both Washington and Oregon struck down laws taxing or licensing bikes and using those monies for paths. In the pre-auto era, the whole idea of someone having to pay for a license to use the public streets was considered by some to be outrageous.

This gets at an interesting aspect of how we view and use roads. Longhurst argues that dating back to Roman times, roads were a kind of commons—shared by all. The right to travel traditional footpaths, trails and roads was widely recognized. But that notion began to be shaken up with the emergence of the auto, a technology that put unprecedented horsepower in the hands of the individual driver. Whereas cyclists had been the main advocates for paved roads at the turn of the century, now wealthy auto enthusiasts began to dominate the “good roads” movement, as it was called.

Longhurst points out that the power differential between the bicyclist and the auto was so great that cars eventually muscled bikes out of the way. Might made right, and even today no cyclist is a match for even the smallest car in a crash test.

As laws governing the roads were written and rewritten, they favored the auto and driver; whether bikes had rights to the road varied from state to state, city to city. In an area outside of the traffic laws—human psychology—the force against the commons had a new ally in a technology that seemed to create the kind of manic behavior that today manifests itself as aggressive driving and “road rage.”

As cars began to dominate, memory of the bike as the first populist city-building transport alternative quickly faded. In Seattle, many of the bike paths were converted to boulevards for cars, such as Lake Washington and Interlaken. The transportation commons became the sole domain of cars, trucks and, grudgingly, pedestrians, who were retrained not to jaywalk. Horses disappeared entirely, and bikes faded into use for recreation or messenger service.

But bikes have been making a comeback. They reemerged as an urban force in the 1970s, then again in the ’90s and now in the early ’00s. Seattle is undergoing a massive transportation makeover with waterfront tunneling, Link light rail expanding, new Metro spending, more streetcar lines and the reemergence of dedicated bike lanes. The issue isn’t bikes or cars. It’s using every tool in the tool kit. And while this has created frustration over congestion (not alleviated) and trying to do too much at the same time, it is the right strategy. It’s a recapturing of the potential of the commons to serve a greater number of people in every way.

The biggest problem is in our heads. As Longhurst’s book reveals, long before there was a “war on cars,” there was a war on bikes, and it was won by auto interests. Now, bikes are merely one important piece of reclaiming the roads for everyone. And it can be done. Writing this column from Milan, Italy—where Leonardo da Vinci toyed with making self-propelling machines for humans in the 15th century—the streets of this large city are comparatively calm, and trains, subways, trolleys, streetcars, cars, bikes, scooters and feet all seem to work together in relative harmony.

That harmony comes in regearing our sense of whom the roads are for (everyone). We can argue about details, but engaging in a primitive battle over rights is not the answer. Too bad we didn’t learn that lesson 100 years ago. We might have kept not only our brilliant bike boulevard system, but connected it to an interstate, one that crossed the country. How cool would that have been?