Capitol Hill Tattoo Artist Tattoos Only Her Own Artwork 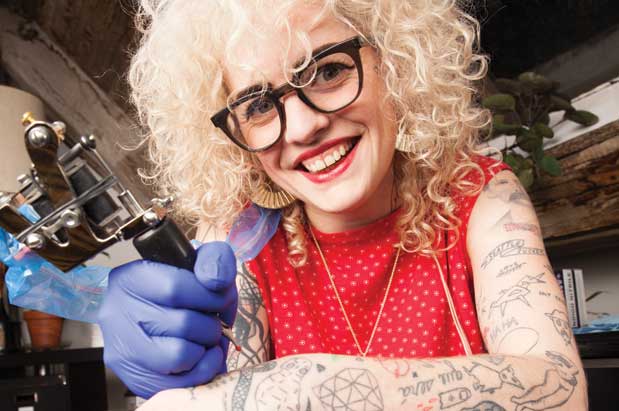 Becoming a tattoo artist was an improbable choice for Shannon Perry, the owner of Valentine’s Tattoo Co. (by appointment only) on Capitol Hill. “The funny thing is that I have a needle phobia. Still to this day, if a doctor draws blood, I feel like I’m going to pass out,” she says. “I think I feel a distinction between a tattooing needle and drawing blood because I’m just messing with the top layer of the epidermis…but it was still counterintuitive.” Perry started experimenting with tattooing a decade ago; when she realized that she wanted more tattoos than she could afford, she took matters into her own hands and bought a tattooing kit on eBay. “It was this really cheap, crappy thing, and the instructions were all in Chinese,” she says. A self-described lifelong dabbler in painting and drawing, she was also driven to DIY by her wish to create her own indelible artwork. When the right-handed artist had nearly covered her left arm with her own work, she took her sketches to professionals and asked them to tattoo her other arm. It was during one of those appointments—with Lisa Orth, who owned Capitol Hill’s Alleged Tattoo before relocating to Los Angeles—that the idea of tattooing as a career first came up. “She knew I did these realistic watercolor paintings and said, ‘You do tattoos and you do art—have you thought about combining those things?’” says Perry. Though she laughed it off at first, after giving it some thought, she called Orth and became her apprentice.

These days, Perry uses tattoo machines custom-built for her on Vashon Island and in Olympia, rather than that old eBay purchase, but one thing hasn’t changed: She still insists on tattooing only her own artwork. Her fans certainly aren’t complaining—her uniquely modern style has garnered her almost 30,000 Instagram followers and more clients than she can handle. Perry uses a seasonal system for scheduling, announcing an open call for bookings via her Instagram account (@shannonperry) about every three months. In choosing the 40 or so lucky clients she can accommodate in that period, Perry culls from about 600 emails, all with descriptions of desired tattoos; it’s a selection process she describes as “heartbreaking.” It’s difficult to nail down what draws her to choose one request over another; she has some favorite subjects (snakes, dainty hands, portraits, to name a few), but often it just comes down to ideas that make her laugh or present a challenge. “The more I can try to grow as an artist and do new things all the time, that’s what I am most excited about,” she says. 1. If Perry looks familiar, that might be because her image is on the side of the music venue Neumos. The 20-foot-high mural by local artist Weirdo was painted for last summer’s Capitol Hill Block Party.

2. In addition to her tattoo artwork, Perry also designs fliers and album covers for her musician friends, most recently creating a T-shirt for a Hollow Earth Radio fundraiser.

3. When she isn’t grasping a pen or needle, Perry usually has her hands wrapped around a microphone—she’s the lead singer of local punk-pop band Gazebos.