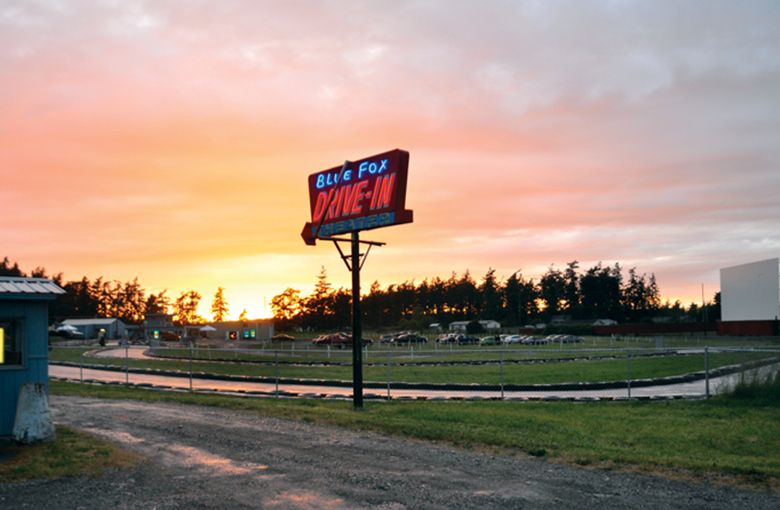 As the sun sets, dusk becomes a portal to an evening “funderland”: arcade games, cheeseburgers and banana pudding, and movies under the stars. Welcome to the drive-in theater, once the summer movie venue of choice before the era of at-your-fingertips entertainment. At one time ubiquitous, only four drive-ins remain in western Washington, all playing new releases, second-run films and often double features. Best of all: Summer is the perfect time to plan your next road trip around one of these old-time entertainment destinations.

Blue Fox Drive-In Theater
Location: Oak Harbor, Whidbey Island (1403 N Monroe Landing Road; 360.675.5667). The Experience: This single-screen theater has room for 380 cars. Tune your radio to 88.7-FM for the movie soundtrack. Sit in your car or outside on a lawn chair. Open seven days a week through the summer. Fun Fact: The late Burl Ives of nearby Anacortes won the Oscar for Best Supporting Actor for his role in The Big Country the year this theater opened (1959). Don’t Miss: Ride go-karts ’til dusk on the drive-in’s track. Play games in the arcade. Design your own T-shirt or hoodie at the drive-in’s design studio, Blue Fox Prints. Concession Favorites: Philly cheesesteaks, curly fries, 100-ounce soft drinks, and pancakes and sausage during intermission. Wheel-In Motor Movie
Location: Port Townsend (210 Theatre Road; 360.385.0859). The Experience: Drive underneath the “Howdy Pardner” sign and into a single-screen theater in a serene forest clearing with spaces for 125 cars. Here you’ll be equipped with classic drive-in speakers that hook onto your car window. Open from April to October. Fun Fact: The owner’s grandparents founded the Wheel-In in 1953. The snack bar building features many original details; the original movie screen was replaced in the summer of 2017. Don’t Miss: You can also watch the movie from a room with theater seating next to the snack bar. Concession Favorites: freshly made hamburgers, hot dogs, nachos and pizza.

Rodeo Drive-In Theater
Location: Bremerton (7369 State Route 3 SW; 360.698.6030) The Experience: This is the largest drive-in in the Northwest, with three screens and room for 1,000 cars. The season is from the first weekend of March through the end of September, with the drive-in open daily from mid-June to Labor Day weekend. Tune in to one of three radio stations for the movie soundtrack. Fun Fact: The Rodeo opened in 1949 as part of the United Drive-Ins chain and has been family owned since 1986. It was reportedly the first Washington drive-in to go completely digital. Don’t Miss: Kids can play on two playgrounds before the show and during intermission. There’s a swap meet on Sundays. Concession Favorites: Philly cheesesteaks, fish and chips, pizza dogs.

Skyline Drive-In Theater
Location: Shelton (182 SE Brewer Road; 360.426.4707). The Experience: This single-screen drive-in is located in a farmland setting with spaces for 330 cars. Its season is from late March through September, with the drive-in open daily during summer. The movie soundtrack is broadcast on 89.1-FM. Fun Facts: Founded in 1964, Skyline was once featured in a video promoting Hood Canal. Ask about the drive-in’s flea market and art fair in August. Don’t Miss: Stay warm during chilly nights at the theater with a Skyline Drive-In blanket or sweatshirt, available for sale at the snack bar (in addition to the usual snack bar fare). No playground or games, just good old-fashioned drive-in movie fun.