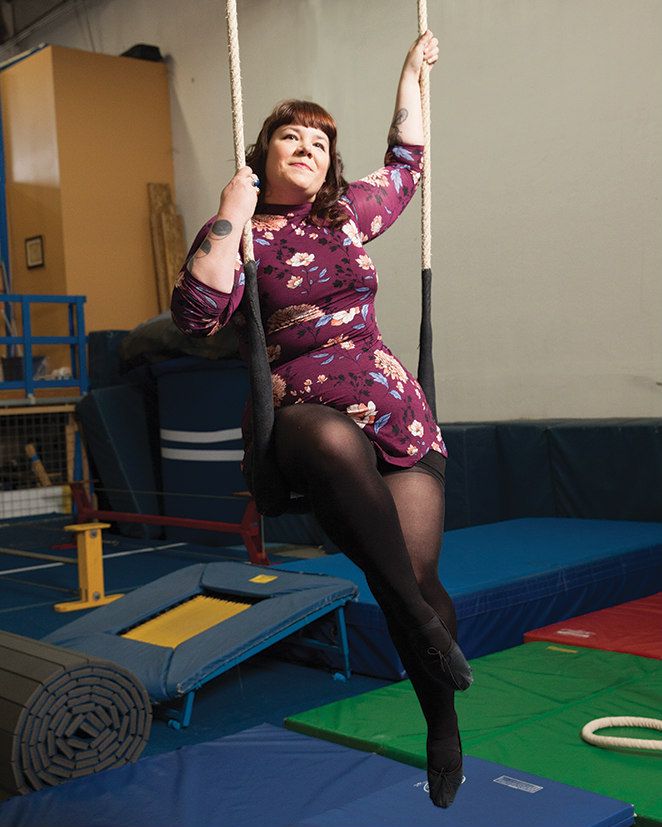 Today, she’s employing her skills in a less conventional manner. Along with five others, Parker works at the School of Acrobatics and New Circus Arts (SANCA) as an “Every Body Circus Coach,” specializing in coaching acrobats with unique challenges. While her colleagues assist children who need physical or cognitive support, Parker specializes in behavioral health for women and plus-size accommodations. As a person of size relatively new to circus arts herself, Parker understands the challenges of working with a larger body, and she doesn’t allow weight to limit anyone’s potential.

Her path from social worker to circus practitioner began when she signed up for SANCA’s aerial silks class as a means of stress relief and adventure. With no background in athletics, she worked through the frustration of being a newcomer by giving in to the process of conditioning her body and embracing the journey.

“My proudest moment was the first time I climbed a rope; it took me over a year and was the moment I realized I could become a professional circus artist.”

A year later, in April 2016, Parker shifted from the role of student to that of teacher. Her work is called “social circus,” a blend of traditional circus skills, such as aerial silks and devil sticks, with mental health support and personal development techniques. She’s only the second person in the nation to explore behavioral health through circus work. She trains up to 60 hours per month—not including the time she spends teaching—saying that working through the hours of blood, sweat and tears is worth it for the transformative powers of circus work.

“I’d never understood what ‘art saves lives’ really meant until I began to do this work. Circus is very physically and emotionally demanding; it requires us to face ourselves, which is some of the hardest work there is. More than any astounding feat of strength or athleticism, I really believe that the greatest tradition in the circus is helping people through the journey of becoming themselves.”

Craft Master
Parker is pursuing a dual master’s degree to become a licensed marriage and family therapist and a developmental therapist, and to further her social circus work.

Family Team
In April, she performed a partner acrobatics routine with her 13-year-old daughter, Olivia, in SANCA’s Annual Spring Showcase.

Juggling Accolades
She’s been featured in American Circus Educators magazine and is slated to speak in July at the Smithsonian Folklife Festival, where more than 1 million people are expected to take part in a conversation about the positive social change, accessibility and health-related aspects of circus arts.