The story—which follows the manipulations and maneuverings of members of pre-revolutionary France’s 18th century royal court—is a familiar one, yet still timely 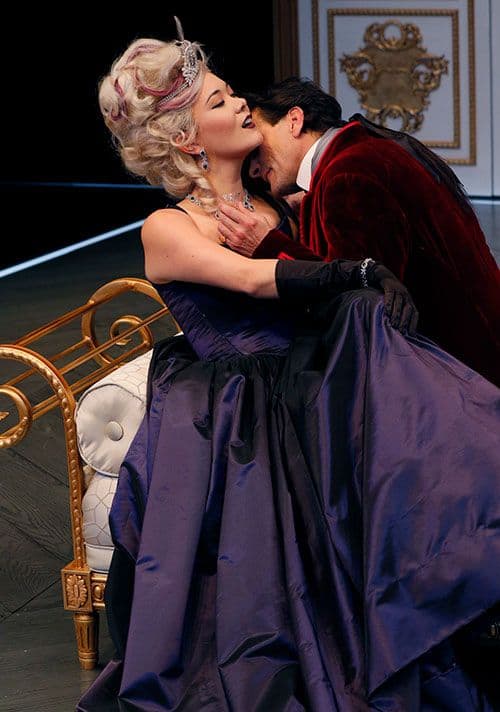 How did Dangerous Liaisons, a 31-year-old play based on the French novel Les Liaisons dangereuses by Pierre Choderlos de Laclos, first published in 1782, get placed in A Contemporary Theater’s season? Artistic director John Langs must have anticipated this question since he addressed it at an ACT event earlier this year, noting the play’s witty, dangerous wordplay and its strong roles for women. The ACT staff was attracted to its central theme of “women and power” which has a clear connection to this year’s Presidential election.

The story—which follows the manipulations and maneuverings of Marquise de Merteuil and Vicomte de Valmont, members of pre-revolutionary France’s 18th century royal court—is a familiar one to many thanks to Stephen Frears’ 1988 movie version of Liasions starring Glenn Close, John Malkovich and Michelle Pfeiffer. And even though the book caused a scandal among the French nobility when it was first published in 1782, it’s been a best seller ever since; even Marie Antoinette was said to have kept a copy in her library in an unmarked wrapper.

So how does this story hold up with 21st century audiences?

ACT’s production delivers biting and satirical wordplay, strong roles for women in power and ultimately demonstrates why this play remains as relevant as ever—whether during an election season or any time.

Langs has wisely put the roles of Merteuil and the Valmont in the hands of James DeVita and Kirsten Potter. No fun watching a couple spar unless the opponents are equally matched. And Potter and DeVita land verbal blows on one another like Ali vs Frazier in their prime. Potter is the highly-skilled and brilliant strategist Ali, but Devita’s strong and solid Frazier is her equal.

The wordplay includes some delicious one liners, most of them given to Merteuil, which Potter delivers with aplomb:

“I’ve always known that I was born to dominate your sex and avenge my own.” (The night I attended, a woman in the audience shouted, “Hear, hear!” to that line.)

The plot is a game of chess where Merteuil is the master, playing everyone she comes in contact with, even Valmont. Not only does she know how to fling Hampton’s one-liners, Potter gives just the right amount of emotional weight to Merteuil’s insightful and searing monologue about playing the hand she was given.

Then, there’s Madame Tourvel, played by Jen Taylor. She unexpectedly turns into Valmont’s love interest—probably the first time he has felt anything for anyone. That Tourvel slowly changes his character for the good makes her more powerful than Merteuil. Any actress tackling this role has to take on Tourvel’s emotional journey, which ranges from defiant piousness, full on passion, rage at being rejected and then, heartache—Taylor doesn’t miss a beat.

But what makes this play still relevant is that it demonstrates that our attraction to distraction is universal and timeless.

Lacos’ novel was unconventional in its time in that it was a series of letters where the exploits of French nobility, once hidden, were now available for public consumption. It was a welcome distraction from the growing hatred toward the upper classes and revolution that was brewing.

The missives the nobles exchange in this story parallel the texts, emails and social channels we rely on today. As in the Liaisons letters, many of our relationships today aren’t grounded in reality: we text our feelings, engage in arguments on our Facebook pages, find love through online dating sites where we chat and breakup before we’ve even actually met the other person. Much easier to stay in our heads and engage in cyber fantasies then to enter the real world, and let our hearts get involved—the same can be said for the characters in this play.

As Valmont actually opens up, falls in love with Tourvel and goes deeper into tangible matters of the heart, the mercurial game he’s been playing with Merteuil is completely disrupted.

DeVita skillfully shows Valmont’s transformation from passionate Don Juan to tragic lover. You never know what his next move will be as he seduces one partner after the other. He never telegraphs what he’s doing by winking at the audience (a trap that other actors have fallen into when they take on this role). Sometimes Valmont’s so good, you can see that he’s even fooling himself.

That’s what’s at the heart of this piece (pun intended). True love conquers lies and deceit, along with the best laid plans of two conniving nobles with too much time and money on their hands.

Other members of the ensemble Langs casts have the depth to handle constant shifts from comedy to tragedy and back again: Jasmine Jean Sim and Lorenzo Roberts personify the hope of new love as Cecile and her music teacher, Le Chevalier, before they’re eventually corrupted.

Keiko Green as Emile, brings mischievous life to her role as a woman of the world to whom sex is has become a business transaction.

As Madame de Rosemonde, Wendy Robie is seemingly unaware of what’s going on under her nose but skillfully delivers a heartfelt monologue on how men and women love differently.

Eleanor Moseley as Madame de Volanges deftly portrays a woman trapped by the mores and roles of the day but unlike, Merteuil, she rarely questions or challenges it.

Even Jason Marr as Azolan provides well-needed comedic relief but shows he can be bought.

Langs has also assembled an impressive crew to help bring Liaisons to life. Brian Sidney Bembridge’s stage is shaped like a boxing ring with a mirror above the stage (the boxing metaphor again) as different bouts are fought in front of us. Matt Starrit’s sound design is minimal and effective with music that effectively shifts us from scene to scene without distracting from the action. As the world falls apart around our central characters, the rich chamber music gives way to disjointed and dissonant noise.

And Catherine Hunt’s stunning costumes help reveal what’s going on beneath the surface with each character. For instance, in Act One she puts Potter in red and DeVita in cool colors. But in Act Two she dresses Potter in cooler colors, and DeVita’s in red velvet as Valmont falls in love with Tourvel.

Not only does Dangerous Liaisons hold up, fans coming to enjoy the word play may find themselves in Valmont’s shoes and emotionally moved, whether they want to be or not.

Dangerous Liaisons, at A Contemporary Theatre, runs through 11/20.