A chat with the former Talking Heads frontman and co-creator of one of the season's most anticipated musicals, 'Here Lies Love' 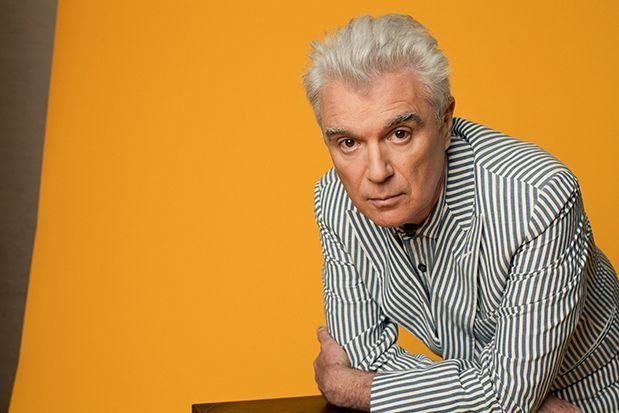 If the thought of a disco musical co-written with DJ Fatboy Slim about First Lady of the Philippines Imelda Marcos sounds wild to you, just wait to hear what co-writer David Byrne has to say about it. Byrne, the frontman of groundbreaking new wave group, Talking Heads, a tireless collaborator [see: St. Vincent, Brian Eno] and arts innovator, took a few moments to chat with Seattle magazine about the exciting production, his inspiration for the show and what he learned about the “Steel Butterfly,” the wife of the 10th President of the Phillipines, Ferdinand Marcos.

SM: Why Imelda Marcos, why a musical?

DB: I knew about her—I’m old enough to know about her and have been alive when she was kind of socializing here in New York. So I knew her as this notorious, extravagant figure. But it wasn’t until I read that she loved to go to discos—she had a disco ball in her New York apartment, which, most people don’t do that—and saw footage of her dancing with an arms dealer, Adnan Khashoggi, under the disco ball in her New York apartment, and I thought, “She surrounds herself with this music. She has a soundtrack that kind of follows her wherever she goes,” and I thought that might be significant. If there’s a story to tell here—and I wasn’t sure there was—then she brings her own musical soundtrack to it. And it’s a kind of music that I enjoy, so I thought, “Let’s see what’s there.” So I did research, and a story came into view.

SM: Did you have any encounters with her in New York?

DB: No, I never did. I went to the Phillipines to do some research and people said, “Oh you should meet her, you should meet her,” but she was ill; she’d had a cold or a flu or something. I’m not sure meeting her would have given me that much information [laughs]. I hear she’s very charming and charismatic.

SM: In your research of Marcos, did you run into any surprises that ran against the dominant, western narrative of her life?

DB: In a way, yeah. There were things that surprised me. Probably like a lot of Americans I tend to, at least at that point, I tended to view them in a very black and white way. I knew them as a dictator and his wife who were embezzling millions and millions of dollars from the Philippine treasury, they were having people disappeared. I knew about of all of this kind of nasty, nasty stuff. So I tended to think of them as just purely bad people. And as I started doing research, talking to Filipinos and went over there to talk to people and see places, I realized that it’s a little more nuanced than that. They were very, very much loved when they first got elected. This is before martial law was declared. Ferdinand Marcos also made good on a lot of his campaign promises to build schools and hospitals and roads, and all this kind of stuff were the kind of things they promised, which was kind of a rare thing in the Philippines those days.

And they were photogenic, so people just really loved them, and they did some good stuff at that point, and later they kind of turned to the dark side. So It’s not as simple as, ‘they were always bad,’ or that everything they did was bad; some things they did were good. But eventually, the bad sort of outweighed it after a while. Under martial law and press censorship and everything else, they could kind of do whatever they wanted. So that’s one thing that was new to me. I think it comes across in they show; the audience becomes a kind of substitute for the Philippine people. They’re kind of seduced by the Marcos’ and by Imelda and her story, and then I think the audience feels somewhat betrayed, the same way the Philippine people did. SM: Was this the idea to stage the production as an immersive musical experience, and the show as if it were in a real nightclub? Attendees are standing up the whole time.

DB: Yes. Not everyone [is standing], there are some seats, there’s balcony seats. But probably half the audience, if they want to, it’s a standing thing. Although, standing only in part; you’re moving around kind of all the time. It’s like you’re in a disco, like you’d move into a dance club, and the performers are all around you. You’re never put in an embarrassing position, but they are really all around you [laughs].

SM: Are you familiar with the Seattle theater audience? We’re not necessarily known to be the most expressive or participatory crowd.

DB: [Laughs.] That’s what the British said. We did the show in London and that was the initial reaction, saying, “Oh no, we don’t want to be the ones on the floor. We want to be the ones sitting down, seated in the seats.” Within a week, they were all clamoring to be on the floor; the floor tickets were the ones that were going first. And so they realized that that’s where the experience is. That’s where the most fun is. But people can sit too if they want to.

SM: Why is it important for the audience to be involved at that level?

DB: Partly because of the kind of pettiness and exuberance of club music is part and parcel of the whole story in a way. [The music] kind of parallels the exuberance of the rise of the Marcos regime and Imelda’s triumph. So in being on the floor and moving around, you participate in that. You kind of identify with it a little bit more. It’s a different way of experiencing theater, a different kind of storytelling.

SM: Wealth disparity, corruption; the power of the people and the power of the individual; these themes have been well-used for the musical stage from Evita to La Boheme. What’s different about the story of Imelda Marcos in Here Lies Love?

DB: There are some similarities. I’m not familiar with some of the other musicals and shows, I haven’t seen them all, probably intentionally, but like Evita, [Marcos] comes from a relatively poor background and then one way or another manages to marry a kind of strong man who’s a rising popular politician and all that kind of stuff. So, there are similarities there. But Imelda’s way of doing it and the whole disco ambiance is very, very different.

SM: Is she aware that there’s this adaptation of her life, and have you heard any response from her about it?

DB: She’s aware of it. I haven’t heard any response. She hasn’t seen it but she does have the record.

SM: How did she get a copy?

DB: I think someone from BBC might’ve given it to her and said, “Here, have a listen to this.” [Laughs]. One of the interesting things about staging a show like this in this kind of immersive way is the audience sometimes let their feelings be known, in ways that they would never do in a proper sit-down theater. We’ve had people yell at the cast members, forgetting that they’re actors, because they feel passionately about the politics, which is kind of an amazing thing. And, well, it’s amusing, but it’s also really pretty great that people are that engaged.

SM: As the musical took shape, did you incorporate any of that audience feedback into the show?

DB: It’s something that we incorporated into working with something we refer to as our “audience wranglers.” We have people to make sure that people are moving in the right direction, that they don’t get run over by platforms that are moving, those types of things. Just looking out for the audience’s safety and that they feel like they’re being looked after and all that.

[Laughs] If audience members are thinking of having a few drinks before the show that’s totally up to them, but this is not like a seated show where if you have too many drinks you can just fall asleep in your seat; you can’t fall asleep when you’re standing up.