Deck the Hall Ball’s Eclectic Lineup Offers Something for Everyone 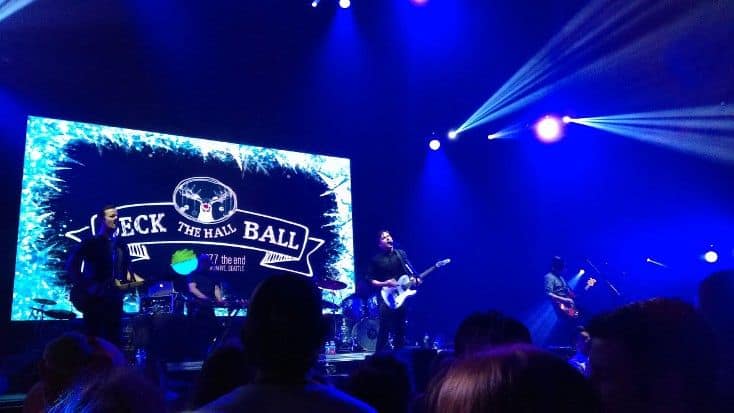 Temperatures were low, but spirits were high as thousands of music fans filed into KeyArena Tuesday for 107.7 The End’s Deck the Hall Ball.

Now in its 24th year, the winter staple has come a long way since its beginnings in the early ’90s, when then-“it” grunge era bands like Evan Dando, Cowboy Junkies, Catherine Wheel and The Jesus and Mary Chain crowded the bill.

This year, The End brought eight bands to KeyArena. And like years before it, the station chose a solid mix of local, stateside and international acts to entertain the ugly holiday sweater-clad masses.

Seattle’s own garage-rock quartet My Goodness helped shake the remaining chill out of the air with an explosive opening performance for a small, but quickly growing crowd, before Nashville-based indie pop quartet COIN, namely lead singer Chase Lawrence, practically out-danced the audience.

The crowd showed its moves during the band’s earworm single “Talk Too Much,” though.

Charleston, South Carolina-by-way-of-Seattle Southern rock quintet Band of Horses quickly became crowd favorites to those who weren’t already into the band by throwing candy between songs as a way to thank the audience for clapping.

At this homecoming show of sorts, lead singer Ben Bridwell got a little reminiscent of the band’s time in Seattle, mentioning “No One’s Gonna Love You” and “The Funeral” were written in Belltown.

“First time playing KeyArena, man,” he said at the beginning of the band’s set. “This is awesome as hell.”

If Band of Horses ever-so-slightly mellowed the crowd, British indie-rock quartet Glass Animals picked it back up with songs from its album Zaba (“Black Mambo,” “Gooey”) and How to Be a Human Being (“Life Itself,” “Season 2 Episode 3”). Lead singer Dave Bayley even had to take his shoes off so he could “dance properly.”

New York electro-rock duo Phantogram kept the momentum going; from my perspective on the floor, it seemed to be the first band of the night that saw a rush of fans towards the stage.

Arizona rock vets Jimmy Eat World, playing its third DTHB, delighted fans with a collection of greatest hits, performing everything from “Sweetness” and “The Middle” to “Bleed American” and “Big Casino,” plus “Sure and Certain” and “You Are Free,” both from the band’s latest album Integrity Blues. The group also performed a timely cover of “Last Christmas” for good measure.

Seattle indie-folk darlings The Head and the Heart, playing its second DTHB, gave the audience a chance to cool down, though fans on the floor never stopped grooving as the band played “All We Ever Knew,” “City of Angels,” “Let’s Be Still,” “Lost in My Mind” and “Down in the Valley.”

Australian electronic duo Empire of the Sun was an interesting choice for headlining act, considering the rock-heavy majority of the lineup, and the pair seemed to divide the crowd with its theatricality.

Fans, like many on the floor, seemed to either love the elaborate stage set-up, complete with headdresses for the band, an intergalatic backdrop and back-up dancers with RoboCop-esque costumes, or were confused by it, judging by the faces of many attendees who remained seated during Empire of the Sun’s set.

But that’s the thing about shows like DTHB, not everything is for everyone, but there’s always something for everyone.