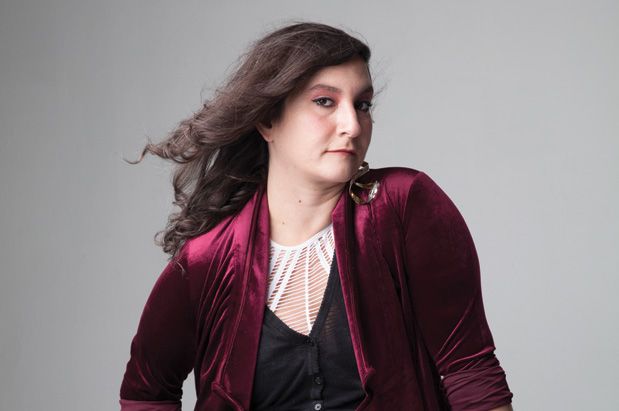 The tradition of American singers who first found their calling at church and continue to draw on their early experiences at places of worship, is as old as America itself. Whether the faith is maintained or lost, the language of higher love and the promise of redemption remain. Here in the decidedly nonreligious city of Seattle, the dark, bluesy and often irreverent singer/songwriter/pianist Mindie Lind—who was raised in a large, churchgoing Southern Baptist family and discovered music within the confines of the church—has established herself as powerful voice in the local music scene.

Lind was born without legs and gets around town, deftly, on a skateboard. While her songs do not overtly address her condition, the lyrics of songs such as “Recluse,” “Mississippi Misfit,” “Lowlands” and “Hunger and Fed” offer a sublime and emotionally nuanced account of otherness that immediately strikes a chord with listeners. As with many great American musical artists, Lind combines the spirit of the blues with the metaphoric language of gospel and a subtle sense of humor.

In 2014, Lind’s career got a boost when she was chosen to tour with Lena Dunham in support of her book, Not That Kind of Girl after responding to a call for artists on Dunham’s website.

Lind will perform at Macefield Music Festival, named for Edith Macefield, the elderly Ballard resident who gained national notoriety for refusing to sell her modest home to developers and became an icon of resistance. The festival runs 9/30–10/2 and takes place on an outdoor stage in Ballard and at a number of indoor venues. $45; macefieldmusicfestival.com

The best in music

(Jazz) McCoy Tyner
10/13–10/16 Legendary pianist, composer and bandleader McCoy Tyner is one of jazz’s most sublime practitioners. His musical career began more than 50 years ago when he played on John Coltrane’s groundbreaking recording A Love Supreme. But that was only the beginning of his story, as his style has continued to evolve alongside an ever-expanding musical world. His stand at Jazz Alley is not to be missed. Times vary. $40. Dimitriou’s Jazz Alley, downtown, 2033 Sixth Ave.; 206.441.9729; jazzalley.com

10/20–10/23 Bacharach, along with his songwriting partner, the late lyricist Hal David, defined the pop sound of the 1960s as much as any artist other than John Lennon and Paul McCartney. The 88-year-old composer—and winner of six Grammys and three Oscars—will perform for three nights within the intimate confines of Jazz Alley. Times and prices vary. Dimitriou’s Jazz Alley, downtown, 2033 Sixth Ave.; 206.441.9729; jazzalley.com

(Classical Indian) Zakir Hussain & Nilardri Kumar
10/23 Percussionist and tabla player Zakir Hussain has, for decades, been a leading figure in the world of classical Indian music, accompanying all of its greatest musicians and dancers in concert. He has also been a key figure in the development of the world music movement. On his current tour, he is joined by sitar master Niladri Kumar. 5 p.m.  Prices vary. Moore Theatre, downtown, 1932 Second Ave.; 206.682.1414; stgpresents.org

(Soul/funk) Maceo Parker with Jones Family Singers
10/29 Saxophonist Maceo Parker—who has collaborated with the likes of James Brown, George Clinton and Prince—is a master of soul and funk. His current tour showcases a repertoire spanning his long career. On stage with Parker will be The Jones Family Singers: five sisters, two brothers and their father, who have been tearing up churches and festivals alike for more than two decades. 8 p.m. Prices vary. Moore Theatre, downtown, 1932 Second Ave.; 206.682.1414; stgpresents.org

(Jazz guitar) Bill Frisell
11/5 Seattle resident Bill Frisell, one of the greatest, most expressive jazz guitarists of our time, has a style that runs the gamut from the experimental to the atmospheric to the melodic. But he always remains anchored in his blues and folk traditions. Frisell will perform for one night at The Moore with Petra Haden, Thomas Morgan and Rudy Royston in support of his latest recording, When You Wish Upon a Star. The album is devoted to standards drawn from movies and television, a genre Frisell treats with awe and reverence. 8 p.m. Prices vary. Moore Theatre, downtown, 1932 Second Ave.; 206.682.1414; stgpresents.org