The book that cost Knute Berger a few sleepless nights 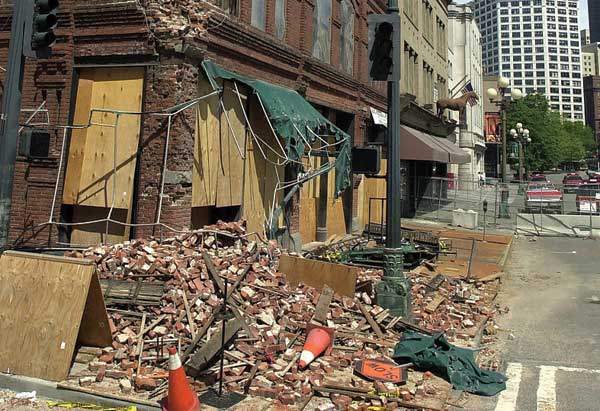 Bertha the underground tunnel-boring machine began her slow march under Seattle this summer. She’s been a long time coming. The Nisqually earthquake hit in 2001 and did enough damage to the Alaskan Way Viaduct that it needed to be replaced, but it’s taken more than a decade to just get this far. The urgency of this work was reemphasized by the failure of the I-5 bridge over the Skagit River at the start of the summer travel season. If a truck can bring a “safe” bridge down, what havoc could be wreaked in the next big quake?

Seattle’s scenery is part of its allure, but our landscape was shaped by cataclysm. If you sit and sip on the deck at Ray’s Boathouse at Shilshole, the pretty views are sobering when you know a little history. Those Olympic peaks? They were thrust up by a collision of tectonic plates that is still happening in slow motion under the Pacific Ocean. Right off the Washington coast is what scientists call a subduction zone that could be the source of the next megaquake. Magnolia’s West Point? The archaeological evidence indicates a Native American settlement there was washed away around 1,100 years ago when a tsunami sloshed about the Puget Sound Basin. It turns out our region has an underground system of faults that, for millennia, has produced devastating quakes at regular intervals.

Seattle has changed a good deal in the last half-century, but we also know more about the place where we built it, thanks to the work of dedicated scientists who have been trying to understand what lies under our feet. Their work is documented in a new book called Full Rip 9.0 (Sasquatch Books, $23.95) and no, the title is not a reference to a blood-alcohol level, unless its yours after you read the book and tried to tamp down the fear with a couple of stiff drinks. Written by Seattle Times science writer Sandi Doughton, the book is a hard, fast and compelling look at the potential impact The Big One might have on us, and it documents the detective work being done by researchers who are trying to nail down the shifting tectonic structures below. It’s recommended beach reading, as long as you know your tsunami evacuation route.

One of the astonishing things you learn is how recently our eyes have been opened to the dangers. The Seattle Fault, for example, which most geologists think runs (in part) from under SoDo to Issaquah, was only starting to get attention in the 1980s, and even now its full extent and connection to other faults is still being mapped.

Scientists also have dug into the ground, swamps, tide flats and lake bottoms to find evidence of old quakes and their impacts. They’ve studied layers of sand and debris left from tsunamis. They’ve counted tree rings in ghost-like underwater standing forests, such as the one south of Mercer Island that slid deep into Lake Washington during a massive quake. They’ve collected and analyzed Native American oral traditions that have recorded centuries-old experiences of tidal waves and temblors. Native American storytellers have told of a’yahos, spirits that could twist the landscape. Science suggests they were talking about a real phenomenon.

Quake dangers are as yet unpredictable, and geological time is beyond the scales of politics and budgets. Researchers are trying to learn more with new scanning technologies and seismic sensors. City policymakers are discussing new rules for retrofitting our vulnerable historic brick buildings. Still, an Earthquake Engineering Resources Institute estimate in 2005 said that a midday quake of 6.7 on the Seattle Fault—hardly the worst that could happen here—could kill 1,600 people, injure 24,000, destroy 10,000 homes or buildings and damage another 180,000. In just 30 seconds. The economic impact would be upward of $33 billion. Doughton quotes an emergency planner: “It’s going to be ugly.”

It’s also easy to be complacent. One reason is that no one can yet predict when the next major quake will happen, let alone one bigger than we have ever witnessed. That might not happen for another 50, 100 or 1,000 years. Or it could happen tomorrow. Until it does, we’ll likely continue to enjoy the views in a state of semi-denial, seeing the great scenery of Mount Rainier and Puget Sound, not a future Pompeii.