Garrison Keillor at the Paramount: “Our Love Will Get Us Through” 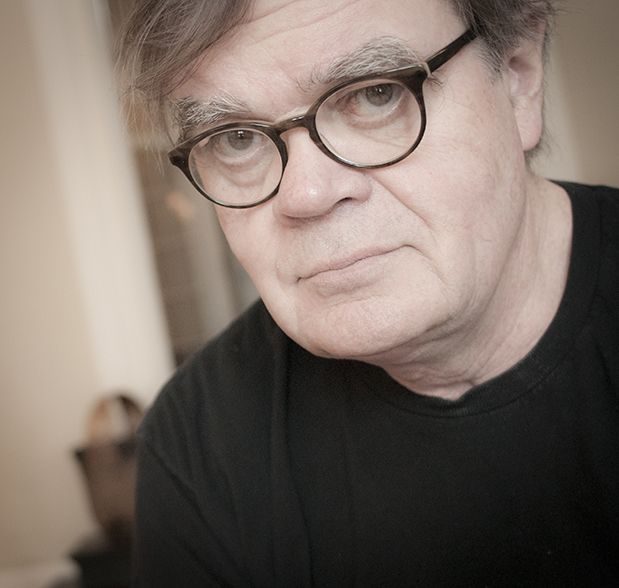 With all due respect to one of America’s most prolific and inventive storytellers, it was anything but a quiet week in Lake Wobegon.

Garrison Keillor, shaken by Donald Trump’s victory, knows that, of course. As he put it Tuesday evening before an appreciative audience, a smear of silver and gray-haired patrons nestled inside the Paramount Theatre, “Well, it’s been an interesting week for an old northern Minnesota liberal.” When a warm wash of knowing laughter subsided, Keillor went on, “It’s like having your house burn down, but at least you don’t have to clean up the basement.”

Keillor has taken much umbrage to Trump’s Electoral College triumph. In a blistering and widely circulated post-election op-ed he penned for the Washington Post, our revered Prairie Home Companion wrote, “Raw ego and proud illiteracy has won out, and a severely learning-disabled man with a real character problem will be president. We are so exhausted from thinking about this election, millions of people will take up leaf-raking and garage cleaning with intense pleasure.”

Keillor, 74, signed off the air for good in July after 42 seasons of serving up an endearing and often madcap stew of tales from his fictional central Minnesota town, where “all the women are strong, all the men are good looking, and all the children are above average.”

He was always splendid company, funny, and insightful; Keillor’s weekly, two-hour radio variety show made those long drives shorter as he unfurled “the weirdness of the ordinary, the intensity of everyday,” as the famed magazine editor Terry McDonell described the writing of novelist Richard Ford.

There he stood on this rainy Tuesday night, bushy eyebrows, large hooded eyes, a tall white self-effacing pillar in his wrinkled linen suit, bright red tie and red socks, his voice deep and sturdy. Such command presence. Keillor began his non-stop two-hour performance with a medley of “God Bless America, “My Country Tis of Thee,” and “Amazing Grace,” before enchanting his longtime admirers with folksy limericks and poems and long, fanciful, unpredictable stories that meandered like a mountain stream.

He talked about aging, offered a delightfully amusing account of his colonoscopy when “I turned old at 72,” and told the hilarious story of the how one of his Lake Wogebon neighbors, Clarence Buxton, while out his daily brisk 30-minute walk, happened to encounter an “ungrateful skunk.” Keillor also reminisced about once long ago running into Bob Dylan, both of who attended the University of Minnesota around the same time. It was during Dylan’s heyday, and, said Keillor, “I told him it should be ‘Lie Lady Lie,” not “Lay Lady Lay.”’

Perhaps Keillor’s most affecting riff came when he wistfully recalled a girl he used to know, a girl he called Carol Hansen and that magical night when he clutched her warm white breast, this “furry little animal.” It was a poignantly rendered tale of youthful thrills, a story he ends with seeing her many years later, old and tired.

As the evening came to an end, Keillor returned, at least obliquely, to his deep disappointment at the presidential election, but with characteristic optimism that has pervaded his many thousands of monologues. He said quietly, “Our love for each other will get us through.”