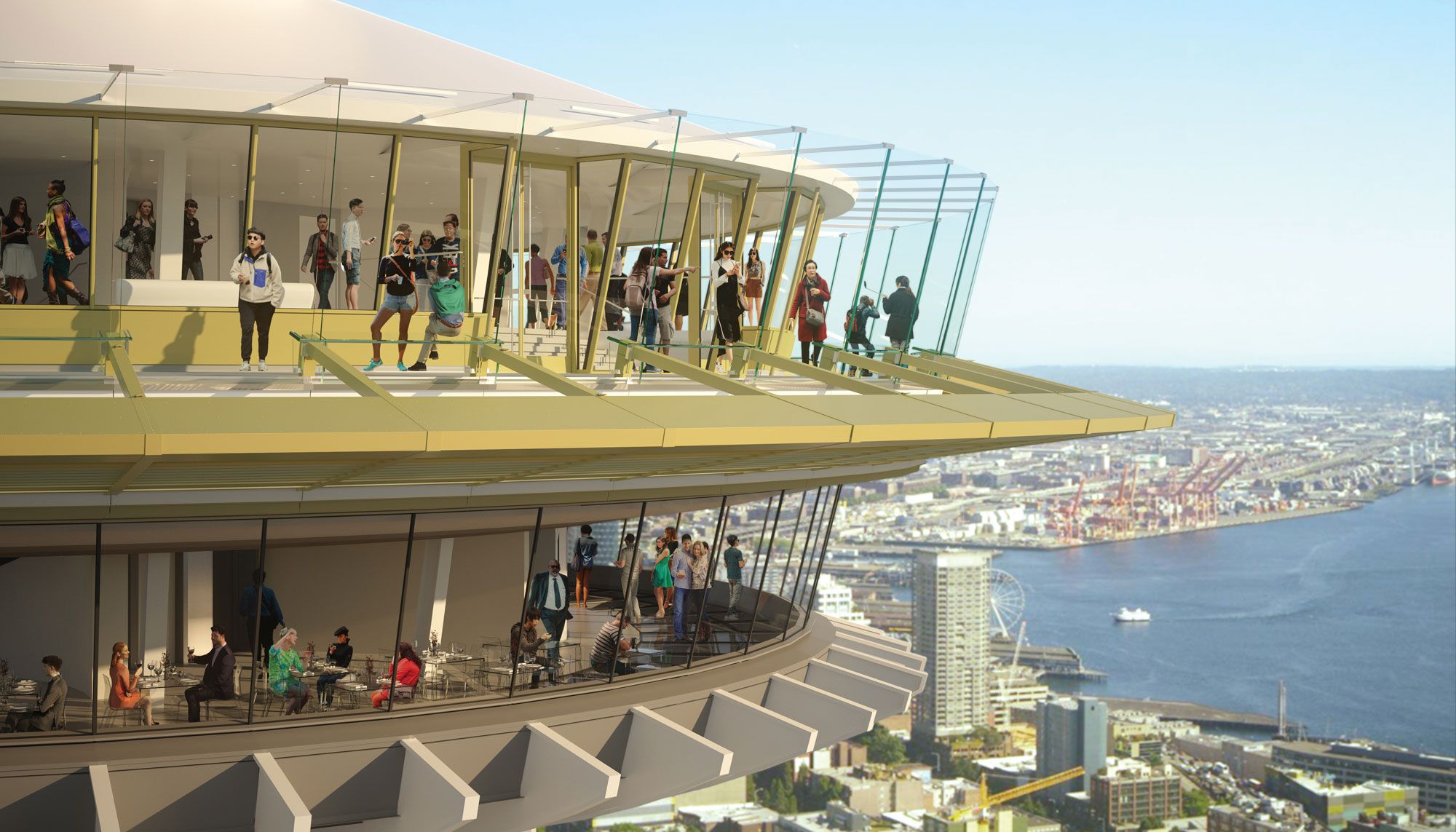 This article appears in print in the June 2018 issue. Click here to subscribe. For more on the Space Needle’s $100 million reconstruction, click here and join us on our behind the scenes tour of the remodel.

Times have changed since the debut of the Space Needle at the Century 21 Exposition, aka the Seattle World’s Fair, in 1962, when the measure of any good cultural landmark was that “Elvis was here.” (Yes, Elvis was there.) Since last September, the 56-year-old structure has been cloaked with a “scrim,” as owners Space Needle LLC, with Olson Kundig architects and a team of construction and community partners, started a “multiyear venture” to revamp the iconic building. The new “Skyriser” glass benches were just revealed (see below for more photos), as the first phase of a long-envisioned upgrade that will bring the Space Age tower into the 21st century. The grand reopening is currently planned for early-to-mid June.

The installation of the Observation Deck’s exterior glass barriers and glass benches and the SkyCity restaurant’s one-of-a-kind rotating glass floor will be the most recognizable features of the renovation—although they’re attributes that those with acrophobia (the fear of heights, from which roughly 7 percent of the population suffers) might decline experiencing altogether.

PIECE BY PIECE ROLLOUT
While the structural glass barrier replacing the Observation Deck’s existing, view-obstructing wire caging is scheduled to be fully installed by Memorial Day, the restaurant remains closed until the next phase of the project rolls out—as yet, without a firm date. (Approximately 70 percent of the Observation Deck has been open during the ongoing upgrades.)

A LOT OF GLASS
It’s a bold choice to retrofit this historic, mid-century landmark using glass as much of the replacement material (and one that required a massive seismic overhaul of the building), but project leaders hope any fears or concerns about the new experience will simply turn into awe. The 7-foot-wide, 11-inch-long structural panels on the Observation Deck each weigh 2,300 pounds, measure 2.5 inches thick and function more like steel, designed with the strength to withstand earthquakes.

But with all this glass, what about spying drones? Will restaurant guests still be able to observe that beloved SkyCity ritual: leaving notes on the ledge next to the tables, to look for after a full 360-degree rotation? What about slipping hazards or nicks? “We’re going to learn stuff along the way,” says Dave Mandapat, the Space Needle’s director of public relations. As for prying eyes, Mandapat says the restaurant floor glass will contain a view-scrambling interface that will obscure looks from the outside. Floors will also be covered with a screen-saver of sorts, a “sacrificial layer” of glass that can be replaced over time. And those notes? With no ledge, may we suggest that Post-its and a pen join the cutlery on each table?

MORE TO COME
As the project continues over the next months and years, other enhancements to be rolled out include: improved ADA access, larger bathrooms, elevator updates, floor-to-ceiling interior glass replacing low-level walls in the Observation Deck entry and a dramatic circular stairway leading from the Observation Deck to the restaurant. In the meantime, the view has only gotten better.

WEB EXTRA: See more photos from Seattle magazine photographer Alex Crook, who was there May 24 for the reveal of the new “Skyrisers” on the 520-foot Observation Level of the Space Needle.