With His New Novel, Matthew Amster-Burton Trades Food for Music 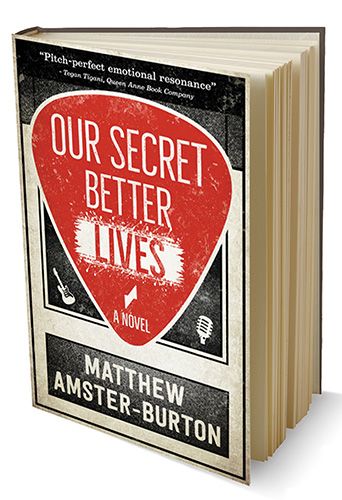 Matthew Amster-Burton’s new novel, Our Secret Better Lives, returns readers to the grunge era, focusing on Northwest kids stuck in Los Angeles while the whole world is going crazy over Pearl Jam. A former Seattle magazine contributor, Amster-Burton is known for his culinary writing and Spilled Milk podcast with Orangette’s Molly Wizenberg. His Pretty Good Number One: An American Family Eats Tokyo was a big seller—with 25,000 copies sold in Japan and a few thousand in the U.S.

This is his first novel—but his fifth book, and the third one funded via a Kickstarter campaign. In all, he’s raised $16,700 to fund three books, which sold a collective 32,000 copies.

“My agent wanted me to take Our Secret Better Lives to a small conventional publisher, but I said no,” says Amster-Burton. Even though he received a $35,000 advance when he sold his 2009 memoir Hungry Monkey (“Timely and excellent,” said Anthony Bourdain) to a mainstream publisher, he says he’s had more success launching his books on Kickstarter. And then there’s the movie deal. His Tokyo book was optioned by producers who hired Travis Fine to direct. Fine’s 2012 disco-era movie Any Day Now won awards at the Seattle, Tribeca, Chicago and Woodstock film festivals. Up next? Another grunge-era novel, Verse Chorus Verse, whose title comes from a Nirvana song.