The History Behind Green Lake’s Grandstand 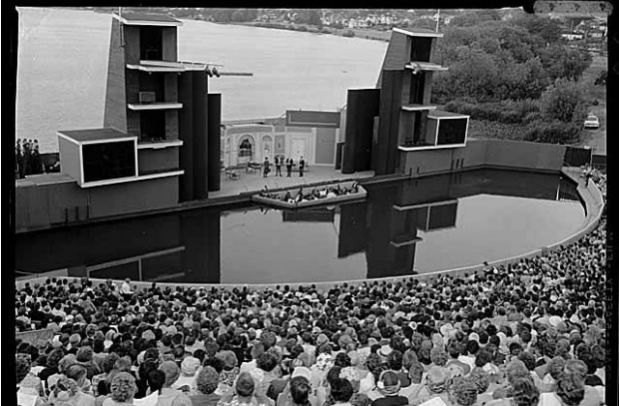 Strolling around Green Lake these days is generally a peaceful pursuit, with most of the action coming from kids playing in the water, kayakers paddling by or the occasional family of ducks flapping around. But at the lake’s southwestern edge, you’ll find the remnants of a historic theater that made a real splash in its day.

The Green Lake Aqua Theater was built to host the Aqua Follies, a whimsical water-dance attraction that took place during the Seafair summer festival from 1950 to 1964. Although the popularity of those “swim-musicals” waned, the theater continued to be used for other entertainment, such as jazz festivals, plays, musicals and concerts, including legendary performances by Led Zeppelin and The Grateful Dead in 1969. That same summer, officials declared the theater’s grandstand unstable, and most of it was dismantled the following year.

Today, only part of the original 5,600-seat grandstand remains, used primarily for fitness follies, with joggers running up and down its stairs, and visitors climbing to the top to take in the view.

PHOTO: Joe Mabel. Today, only a single section of the original grandstand remains.