By Lara Hale and Lyra Fontaine 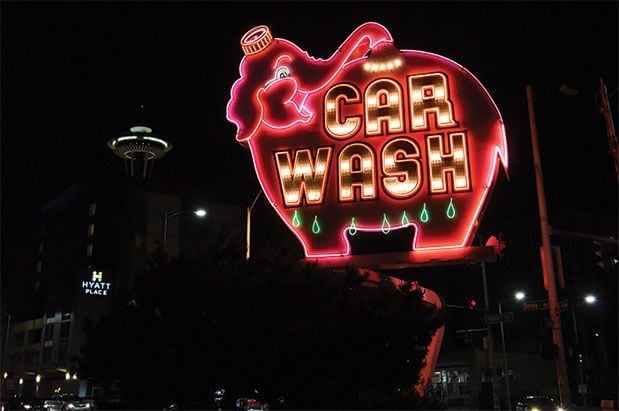 You know what they say: Washing your car is the surest way to bring on rain.

If that’s the case, many of Seattle’s drizzly days must be caused by Elephant Car Wash. The business traces its roots back to the 1940s, when Richmond Beach native Eldon Anderson and his business partners opened the Five Minute Car Wash, one of the country’s first semi-automated car washes. Over the years, Anderson used some of the skills he learned as a heavy equipment operator and builder (he reportedly worked on the construction of the Deception Pass bridge) to invent the first truly hands-free car washing system. In 1951, he convinced two of his younger brothers, Archie and Dean, to partner with him on a new enterprise: Elephant Car Wash.

Although the first location (there are now 14) was at Fourth and Lander in SoDo, the second location, opened in 1956 on Battery Street downtown, is the best known. Its rotating, pink neon sign—which has appeared in movies, music videos and ads, and has attracted patrons ranging from the Secret Service to Elvis Presley—is said to be one of the most photographed landmarks in Seattle.