Inside the Mind of Mad Music Scientist Trimpin

A musical genius takes the Seattle Symphony into the digital age 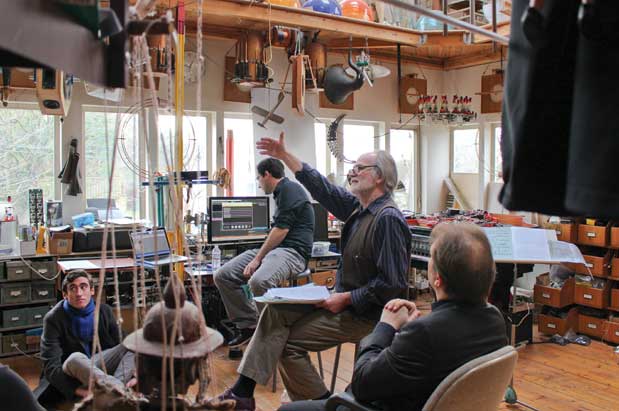 This article originally appeared in the April 2015 issue of Seattle Magazine.

Aside from the pink flamingos flanking the walkway, there’s nothing particularly telltale about the exterior of the studio where one of Seattle’s musical masterminds works his mad science. But just over the threshold, visitors are plunged into the inimitable world of Trimpin, the sound artist, composer, instrument inventor and MacArthur genius who goes by his last name only. The lofty two-story space in Madrona is a fantastic crush of instruments, mechanics and mysteries—gears, horns, propellers, marionettes, a variety of tubes, toy guitars, a tractor seat, toy pianos, mannequin parts and more, hanging off the walls and stacked in corners—and probably a good facsimile of being inside Trimpin’s brain.

Trimpin (with a German accent, and wearing his signature wool vest and stone-colored trousers) is revealing a new composition commissioned by the symphony as part of its groundbreaking (if confusingly titled) music series, [untitled]. As a participant in and proponent of experimental music, Trimpin was already a fan of the series, which celebrates the avant garde. “It was very exciting to go to Seattle Symphony and hear music I was attracted to,” he says. “This is music never played before by the symphony.”

The featured spectral and timbre-focused works are an unusual treat, and the setting is a departure as well: Both the musicians and the audience sit in the Samuel & Althea Stroum Grand Lobby, just outside the main auditorium. Listeners walk around during the performances, or lie on cushions on the floor, mere feet away from the musicians.

When tapped to create a new piece for [untitled], Trimpin did what he does for all of his sound installations: He acoustically mapped out the space. “I based the composition on the architecture,” he says. He was particularly inspired by the nine columns spanning the lobby. “I tried to figure out what would fit with the eight spaces in between,” he says. Trimpin’s special gift is building auto-playing, kinetic instruments, usually triggered by a person who presses a button or walks past a movement sensor or drops a quarter into a slot. (He created the towering tornado of auto-playing guitars at EMP.) Incorporating both high tech (MIDI files) and low tech (piano strings), his installations whirr, blast, thump and plink—a pleasing din that differs slightly every time.

“I wanted to introduce new sounds to the Seattle Symphony audience,” Trimpin recalls, including “a piano that looks like a piano, but doesn’t sound like a piano.” He gestures toward the southwest corner of the studio, where a piano that resembles a Dr. Frankenstein creation—implanted with small robotic devices that pluck and scratch the strings—awaits its cue. Hanging above the middle of the room is a cluster of silver chimes, which Trimpin has embedded with electromechanical pistons and will suspend between the nine columns. He also created 24 “reedhorns,” triangular blue boxes that house metal reeds from a pump organ, operated by a computerized blower and sounding something like a harmonium. “These fill the space with layers of sound,” he says. “I think of it like a choir.”

Speaking of humans, when the symphony first asked Trimpin to create a piece he asked, “Do I have to use musicians?” He believes that thanks to new technology, mechanical instruments can be manipulated to incorporate the quintessentially human element of “groove, or soul.” But since the grant required it, he opted for a minimalist crew: nine musicians (playing cello, bass, viola, trombone), each stationed above a column, plus a soprano singer and one more crucial human: the conductor. Trimpin says he knew from the beginning that he wanted Morlot to conduct both the musicians and the mechanical instruments at the same time, so he enlisted a former student, Dmitri Diakopoulus, who works for Intel, to investigate the possibility of using motion sensors.

“For me, it’s important to work with young minds,” Trimpin says. With Diakopoulus, he learned that Microsoft Kinect technology could be used to capture the conductor’s movements, and thereby trigger the mechanical instruments. The next trick was determining how Morlot could conduct the humans and the machines simultaneously.

The team developed a gesture—grabbing the air with the left hand—that signals the computer to relay messages to the mechanical instruments. Once the left hand is in grab position, Morlot can adjust the volume and flow of the machines by altering the height and pace of his right hand. When he releases the grab and waves his hand, the computer stops sending messages, and he can continue conducting the musicians as he would during a regular concert. Having never before used a Kinect or Wii system, Morlot attempts the gesture-capture technique in the studio. It seems sort of like patting your head and rubbing your stomach while robots keep asking you, “What should we do next?”

“Outside the comfort zone is where we become better artists,” Morlot says. He’s excited about this experiment because he believes the piece offers a glimpse of the role technology will play in the future of music—already, he feels he has “new tools in my bag.” Morlot is also on a mission: “Seattle isn’t aware of the genius we have in town—this amazing musical brain,” he says, marveling at Trimpin. “I want to repair this.”

They try another run-through with the motion sensors. Morlot grabs and pushes the air, setting off the chimes, the reedhorns and the steampunk piano. As the sun warms the studio, the wooden beams join in, creaking and popping to their own invisible score.