Inside the New Nordic Museum: Behind the Scenes for One of Seattle’s Most Anticipated Cultural Openings of the Year 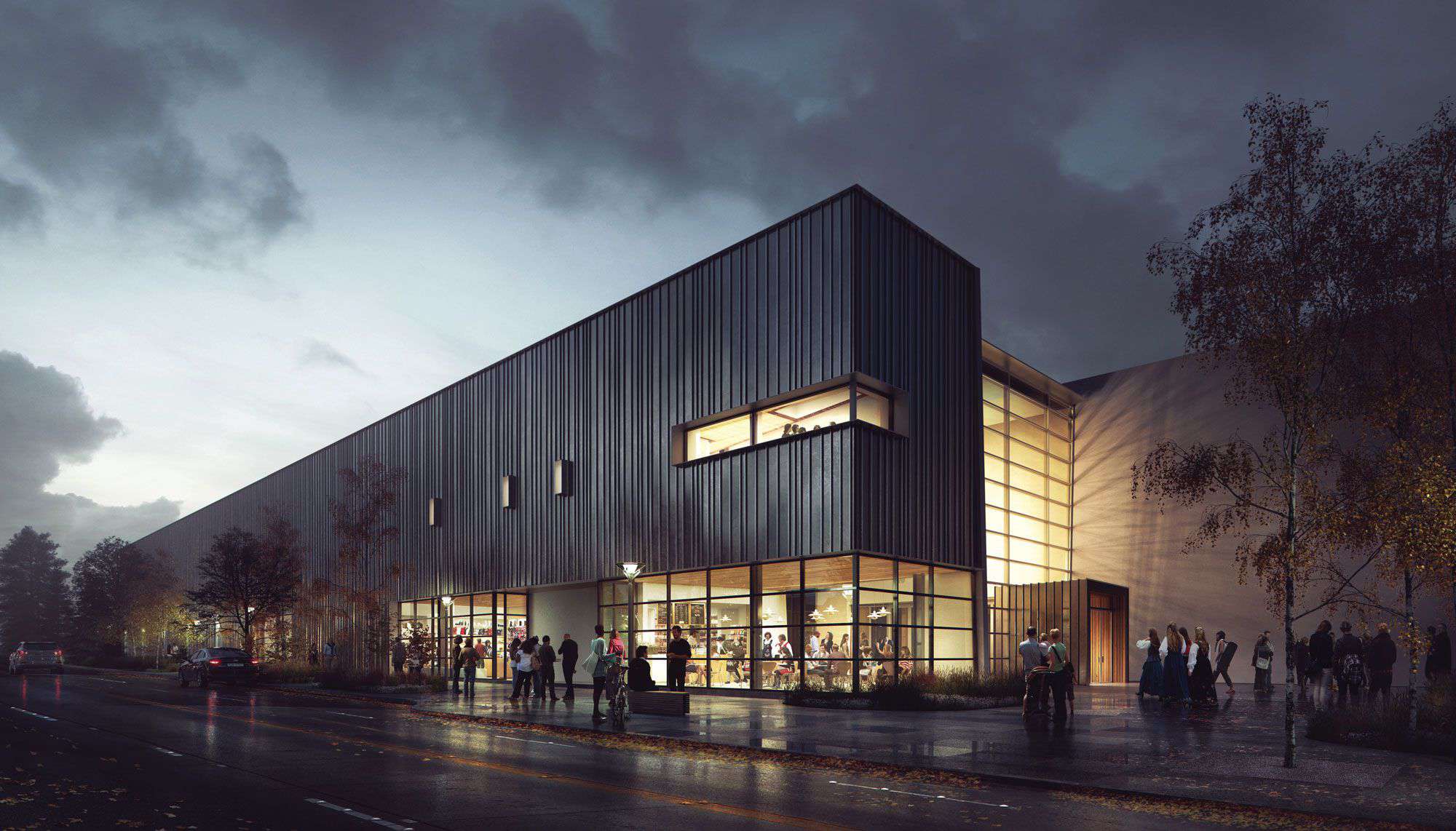 What comes to mind when you think of the word “Nordic”? Classic cross-country skiing? Vikings? Snowflake patterns on knit sweaters?

Since it was founded in 1979, the Nordic Heritage Museum—now to be known simply as the Nordic Museum—has been working to change that. Why not haute cuisine, award-winning literature, iconic fashion, famous royalty, contemporary art, modern design, sustainable living? After all, the five Nordic countries—Denmark, Finland, Iceland, Norway and Sweden, along with their islands and autonomous regions—have a long, rich history of traditions and innovations worth celebrating. The museum’s new home in Ballard, a stunning, design-centric facility overlooking Salmon Bay, does just that.

The 57,000-square-foot building is a giant leap from its former home literally and figuratively; the old museum space, a 1907 brick schoolhouse, is located about a mile south. Yet this undertaking was no mere “lateral move”; a decade’s worth of planning, a multimillion-dollar capital campaign and globe-spanning creative collaborations have taken place to bring the project together. This includes a gathering of carefully selected, award-winning partners, such as architects with Seattle’s Mithun firm (who designed the facility), museum exhibition design firm Ralph Appelbaum Associates (the team behind exhibition spaces such as the United States Holocaust Memorial Museum and the National Museum of African American History and Culture, both in Washington, D.C.) and Finnish architect Juhani Pallasmaa, who advised on matters of the Nordic aesthetic.

These carefully laid plans are evident as soon as you see the site, nestled at the corner of NW Market Street and 28th Avenue NW. Sleek Danish-made exterior siding encapsulates the asymmetrical Nordic modern structure. A floor-to-ceiling wall of gleaming windows makes up the main entrance on the west; the effect is mirrored on the building’s opposite side, allowing for dramatic play of light off the snow white walls flanking Fjord Hall, the ground-level corridor designed to echo the region’s rugged geography. Other notable exterior features include the meditation garden, to the east, and the sprawling, south-facing outdoor patio (and rentable event space), which leads to a parking lot for 76 cars—truly valuable real estate in the booming neighborhood.

Heading inside, wooden door pulls hand-carved by Seattle artist Steve Jensen anchoring the two main entrances incorporate traditional Norse symbols, such as stars, waves and oars. Look up as you move through Fjord Hall; everything is Nordic, from the Louis Poulsen hanging lamps to the hand-blown glass birds from the Faroe Islands, and the room-specific Danish flooring to the Finnish Kone elevators. Overhead, architectural bridges crisscross Fjord Hall, connecting the second-floor galleries housing the museum’s permanent collection, chosen from 77,000 objects and artifacts. The walkways are also metaphors: symbolic crossings that reflect the Nordic peoples’—and cultures’—diaspora throughout the world.

The metaphor is particularly relevant for Seattle, whose fish- and forest-rich industries long ago attracted scores of Nordic immigrants, who planted cultural roots in the city, many in the Ballard neighborhood (which celebrates its heritage on Syttende Mai, Norwegian independence day, with a parade and festival on May 17). Could those ancestors have guessed that the city would one day be home to the largest museum in the United States dedicated to honor their legacy and influence? Would they have believed that Architectural Digest, The New York Times and other publications have dubbed it one of the top new museums to visit in the world in 2018?

What is known is that the Nordic influence is everywhere, in Seattle and beyond, from pop culture to politics—and the Nordic Museum is the stage to tell the world all about it. 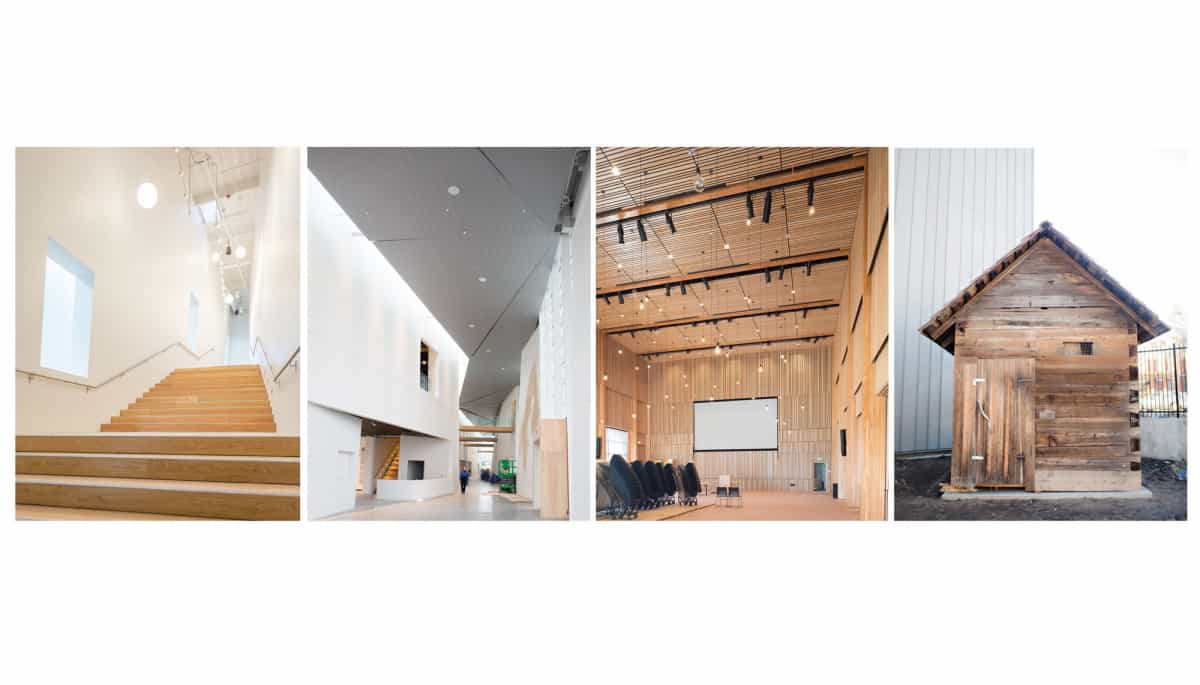 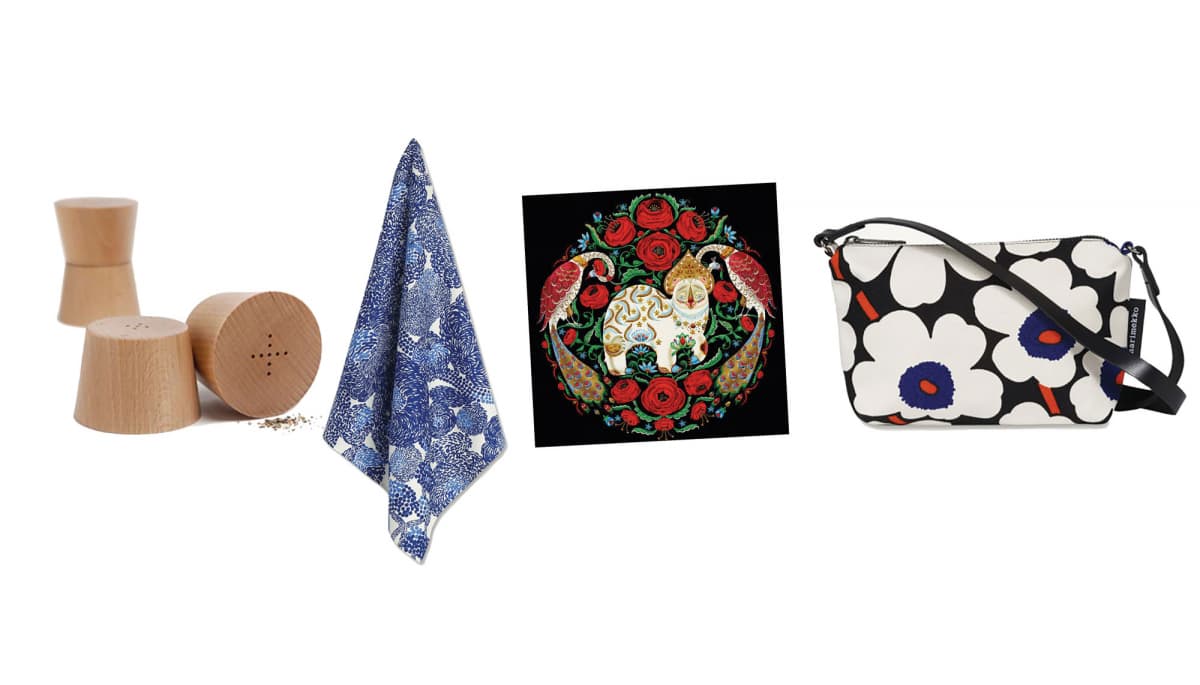 Products at the new museum store may include items such as this minimalist salt and pepper shaker set by Thea Mehl, a Marimekko tea towel and  handbag, and a print by Klaus Haapaniemi.

Nordic Style
What’s in store at the new gift shop

Taken as a whole, the Nordic Museum is the perfect marriage of old and new. Relics and artifacts from the region’s countries—some thousands of years old—have found a happy hygge home alongside cutting-edge, contemporary Nordic art, design and the museum’s special exhibits. While not yet finished at press time, the museum store has the potential to do the same, marrying items that give a nod to the current Nordic-obsessed design and lifestyle craze with more traditional wares. Operations manager Adam Lee Allan-Spencer hints that it will. “From fashion to home,” he says, “we will focus on simplicity and ‘Nordic living’ trends that we see taking root here in America.” He indicates that shoppers will still find beloved brands such as Royal Copenhagen and timelessly modern items from the likes of Marimekko, but the store will also be a platform to showcase the region’s latest vanguard of artists and designers, such as the minimalist barware and tabletop creations of Norway’s Thea Mehl, and items and housewares carrying the more intricate and traditional graphic artwork of Finnish illustrator Klaus Haapaniemi.

Allan-Spencer is also exploring merchandise associated with the museum’s opening special exhibition, Northern Exposure (a survey of contemporary Nordic arts), including items from or inspired by featured artists Olafur Eliasson, Britta Marakatt-Labba and Kim Simonsson. “We will carry items that focus on the Nordic region’s rich and expansive history and showcase merchandise that ties into the museum’s temporary and permanent exhibits,” he says. (We’re thinking modern art meets salt and pepper shakers.)

Other products will include crafts inspired by the Sami, Scandinavia’s indigenous people, natural beauty products from Iceland, environmentally friendly Danish toys and—thank goodness—Swedish chocolate. He didn’t mention it, but our guess is that you’ll find the latest version of The Little Book of Hygge and The Gentle Art of Swedish Death Cleaning on the shelves, too. 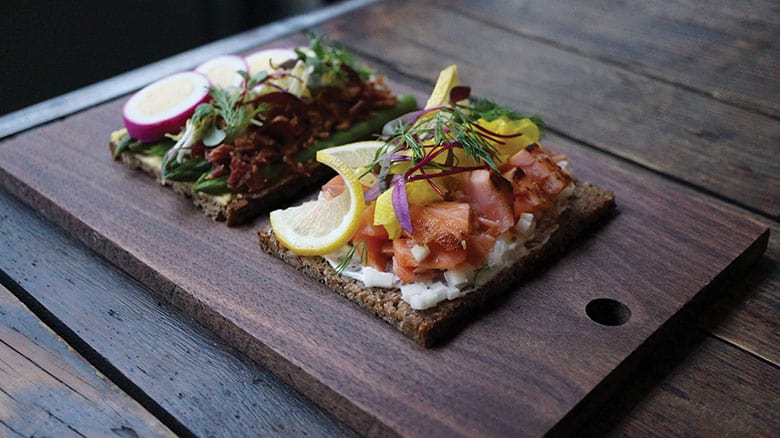 In line with the nordic museum’s strong architectural design, no detail was spared in the planning of its bright, open café, Freya, from its name (shared with the Norse goddess of love and beauty) to its seating (Swedish Lammhults chairs). It is housed in the museum’s sunny northwest corner and offers a rotating menu of smørrebrød, the Danish open-faced sandwiches ($9–$14); meat-and-cheese plates they’re calling smorgasbord ($12–$14); salads ($8–$12); soups ($4–$7.50); and desserts ($2–$4), such as the Swedish ginger cookies pepparkakor.

City Catering Company is the culinary creative force behind Freya—which is open not only to museum visitors but also to the public (there are separate entrances for both types of guests)—as well as the bespoke menus for private events hosted at the museum. Many Nordic (and non-Nordic) menu options are offered, including Danish, Swedish and Finnish variations on meatballs. Executive chef Brendan Arntz has spent years following internationally renowned chefs like René Redzepi (of Noma in Denmark) and Magnus Nilsson (of Fäviken in Sweden); you can expect to see their influence, particularly in regard to pickling (such as pickled beets and mustard seeds) and preserving (such as Scandinavian-inspired jams).

No Nordic meal would be complete without a drink: Belly up to the small bar area to sample some aquavit, particularly the Icelandic version referred to as “Black Death”—if you dare. – By Chelsea Lin

Café hours: Tuesday–Sunday, 10 a.m.–5 p.m., until 8 p.m. Thursdays (hours may expand later this summer). The restaurant does not open until May 8. See more about the food that will be at the Nordic Museum here. 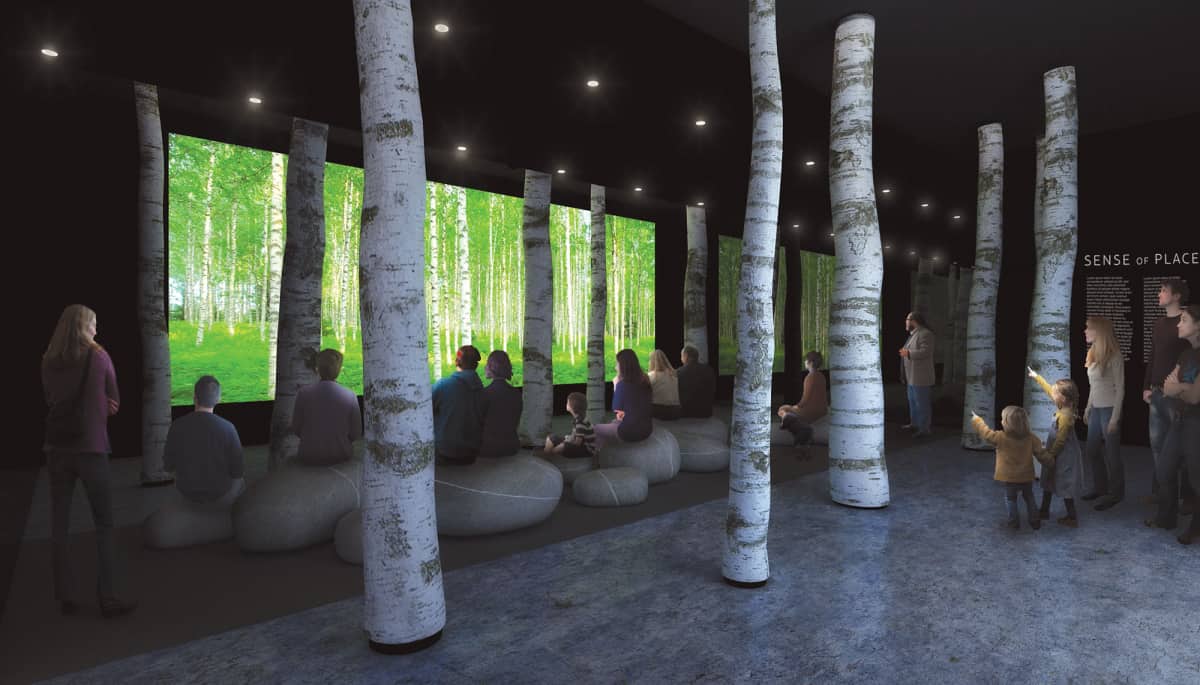 The Sense of Place Gallery on the second floor immerses visitors in a sensory world that explores the geography and climate of the Nordic countries. Image courtesy Nordic Museum.

Floor Plans
What’s where in the new Nordic Museum 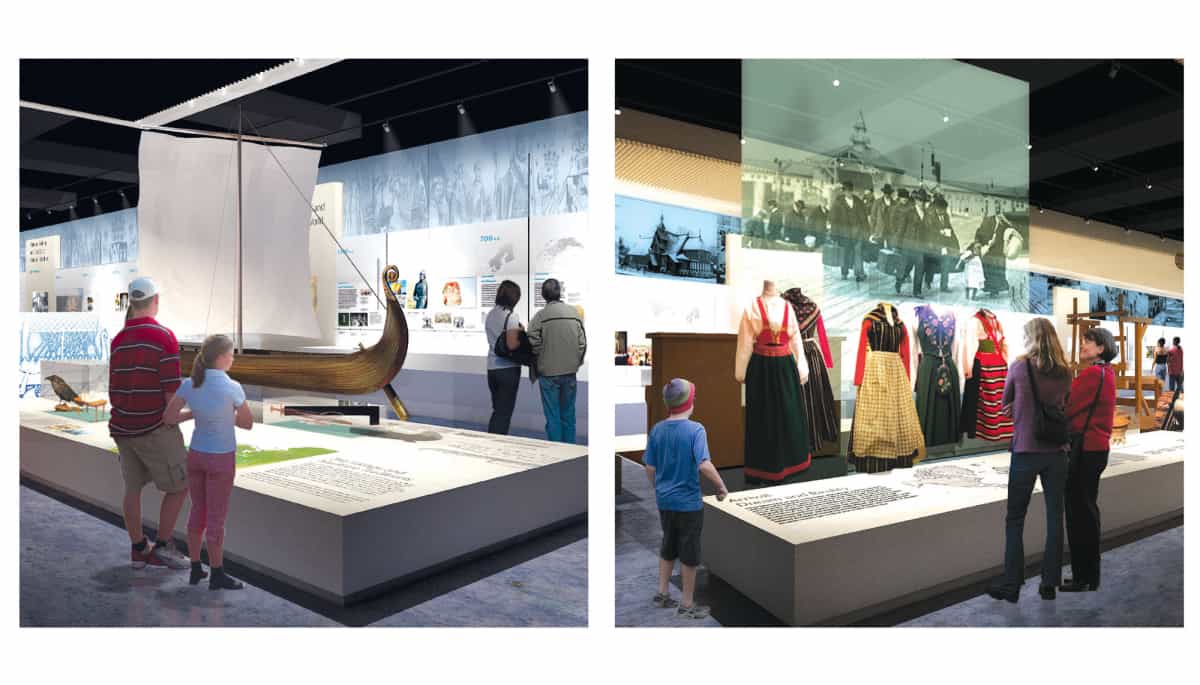 Staff offices, meeting rooms and volunteer lounge; some spaces can be rented to the public.

Read more about the Nordic Museum’s opening in the May 2018 issue of Seattle magazine, now available on newsstands.