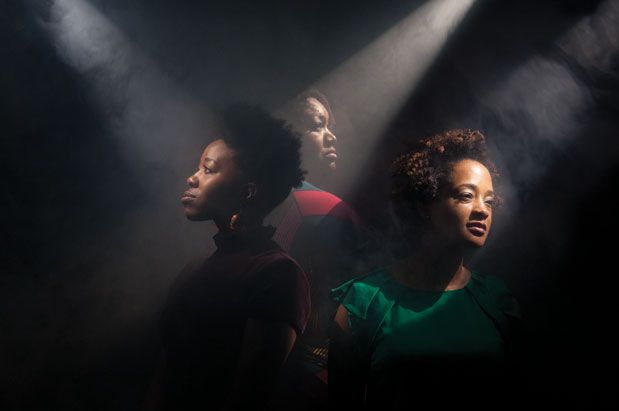 The once-venerable 44-year-old company, which just five years ago was forced by a looming financial shortfall to cancel its programming midseason and retrench, would devote its entire season to presenting nearly 20 American plays by black women who create community and deepen understanding. The festival would be produced in partnership with other area organizations and co-curator Valerie Curtis-Newton, head of acting and directing at the University of Washington’s School of Drama, and cofounder of the Hansbury Project, a local theater lab that supports black theater artists developing and producing new work.

Founded in 1972, Intiman quickly established itself as an important force in Seattle’s art scene. The company originally focused on Scandinavian drama and international dramatic literature. Over the years, it grew to be a major regional theater company and expanded its repertory from classic, canonical dramas to major new works. Under the six-year reign of artistic director Warner Shook (1993–1999), the company eclipsed Seattle’s other stages as a venue for the production of new work and was the first regional theater to secure the rights to produce Tony Kushner’s two-part epic Angels in America. The company continued to function in that role before abandoning its 2011 season in favor of its current multi-venue, festival format.

But as the lineup for the 2016 Intiman Theatre Festival shows, the organization hasn’t abandoned its long commitment to staging new work or its history of social and civic engagement. Instead, the institution’s near-collapse has only strengthened its resolve and clarified its vision.

“We are finding new ways year after year to bring our professional theater closer to the community by making sure that the stories onstage—as well as the producing methods to bring those stories to life—are forward-thinking, inclusive and progressive,” says Andrew Russell, the producing artistic director of the festival, which this year will include three major productions, and numerous workshops and readings. “In 2016, audiences will be exposed to black women who have changed and are changing the face of American theater and shaping culture.”

The programming for this year’s festival is part of Intiman’s new strategy, says Russell. “More and more we are trying to…organize our community and audience around incredible, moving and powerful theater that generates conversation and progress.”

Another aspect of the festival is the Intiman Emerging Artist Program. For a second year, Intiman will bring 30 up-and-coming theater talents together for free training and development to prepare them for a career in the theater, with the goal of diversifying the profile of those working in theater.

The plays in the 2016 festival investigate issues of race in American society. Some do so through realism; others, through more experimental means. Some are concerned with the present state of race relations; others, with a darker recent past.

From May 24 to June 12, Stick Fly by Lydia R. Diamond will be performed at the Langston Hughes Performing Arts Institute and directed by Justin Emeka, assistant professor of Africana Studies and Theatre at Oberlin College. The story takes place at the vacation home of an affluent African-American family where two brothers introduce their girlfriends to their parents for the first time, and explores secrets and family tensions surrounding race and privilege.

This year’s Emerging Artist Program will focus on the work of 84-year-old pioneering avant-garde playwright Adrienne Kennedy and culminate in a showcase of her work on August 5–7. Russell himself will mentor the three directors chosen to lead the productions.

Later in the season, Intiman will stage Wedding Band: A Love/Hate Story in Black and White, written by Alice Childress and directed by Curtis-Newton. Set in 1918, Wedding Band is the story of Julia, a black seamstress, and Herman, a white baker, who must endure hardship after deciding they wish to marry in the Jim Crow South. The production takes place at the Floyd and Delores Jones Playhouse at the University of Washington from September 6 to October 2.

At a time when many in Seattle’s performing arts scene have grown pessimistic about its survival, Russell is optimistic about the ability of arts organizations to evolve and adapt in this new environment. He notes that Intiman’s annual Show the Love fundraising campaign raised more than $135,000 from more than 600 donations online, thanks largely to the efforts of the nearly 100 team leaders who hustled on its behalf, often using social media to spread the word. Nearly 80 percent of those donors had never given to Intiman before.

Russell says that, although Intiman did not set out to create a model that would be adopted by other companies, he thinks its outreach program and production format incorporate values and fundamentals that should be considered when producing theater and art today. And so far, the strategy is paying off.

“In 2012, there were so many questions about our survival and our future—and I’m proud to say that we have a robust cash reserve, are scheduled to be free of all pre-festival debt in 2018, and are being recognized not just for the fact that we survived, but because we have thrived.”