There was a lot of Seattle love on The Tonight Show last night. 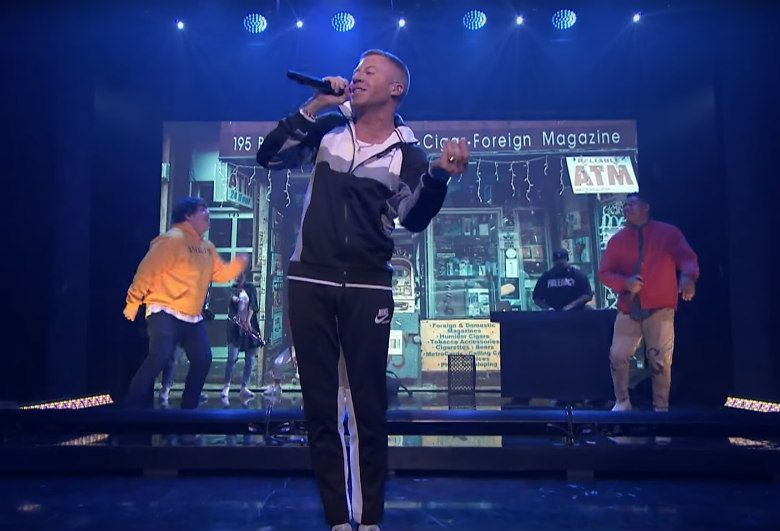 Last night on The Tonight Show Starring Jimmy Fallon, Macklemore performed a new single for the first time on national TV with not one, but two up-and-coming Seattle rappers. Dave B and Travis Thompson absolutely slayed their parts on “Corner Store,” the second single off Macklemore’s new Gemini album.

Dave B garnered local popularity with the release of last year’s Tomorrow LP and drops its follow-up, Pearl, this week. Travis Thompson embodies the success of Ryan Lewis and Macklemore’s program The Residency, which teaches low-income youth music industry skills. Thompson’s well-received Ambaum mixtape from 2016 is worth a listen, too.

Besides giving a shout out to KEXP’s John Richards, Jimmy Fallon introduced Macklemore’s new album, which the Trump-bashing rapper is supporting with a tour of the same name. Apparently Fallon became a big fan of KEXP, and Richards in particular, when Richards’ “John in the Morning” was broadcasted in New York from 2008-2011 as a partnership with Radio New York. When the collaboration ended, a notably bummed Fallon tweeted his disappointment. “KEXP gone from 91.5 NYC?!?!??!! No John @loserboy Richards? Man, I miss that station,” Fallon wrote.

As for Richards, he seemed to appreciate the love from a famous fan.

Well ain’t that something. Always great to hear from Mr. @jimmyfallon and extra special when it’s with our friend @macklemore. Thank you both for everything you do for @kexp and thank you Aaron. https://t.co/TdaqIh5tkD

As we mentioned in September, Macklemore’s Gemini tour comes to KeyArena December 22-23, and will feature guest performances from Dave B and Travis Thompson.

You just can’t beat Seattle’s talent and beats. See for yourself in the video below.