Keep Your Eyes Peeled for the Rare “Scenic Drive” Sign 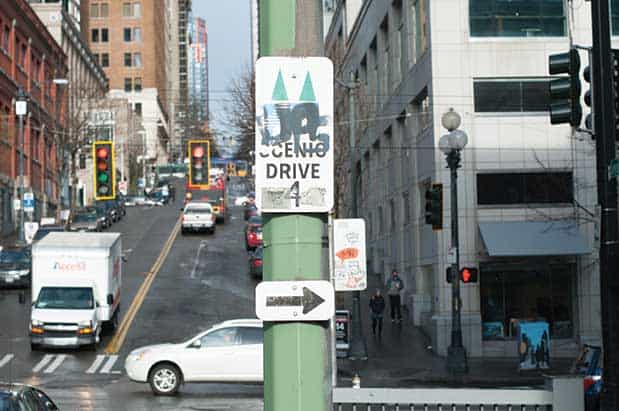 These days, Seattle’s streets are peppered with signs proclaiming road closures, revised routes and reminders not to “block the box.”

But keep your eyes peeled and you may spot a rare “Scenic Drive” sign. The signs are the legacies of a 1958 collaboration between the City of Seattle and the Chamber of Commerce, created to promote Seattle’s natural beauty and to give tourists an easy way to maneuver through the city’s scenic areas. A local artist, Robert Mathiesen, created the simple design—which features a blue Neptune’s trident representing local waters, and/or two elongated green triangles representing our evergreen trees—painted on wooden signs, which were eventually upgraded to aluminum. The signs remained until the 1980s, when the majority of them were removed to make way for more directional signage.

According to a City of Seattle spokesperson, the few signs that remain—including one near the Fauntleroy ferry terminal and another on northbound State Route 99 near the Battery Street Tunnel—are no longer maintained by the city and will probably be removed eventually as well.

In the meantime, they’re quaint reminders of a time when tourists used signs rather than Google Maps to navigate the city.