The twinkle lights are back! 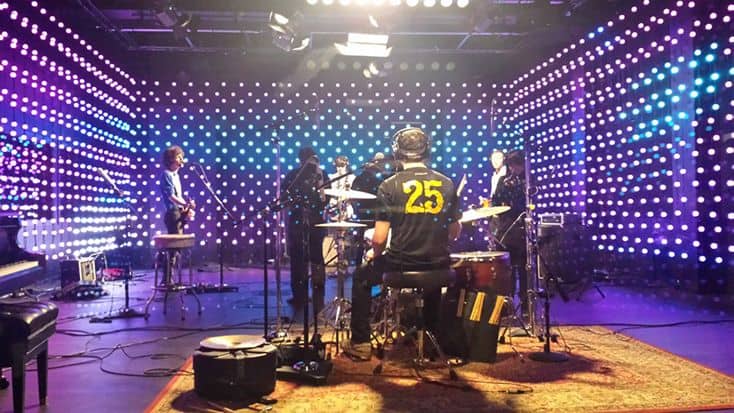 Since relocating to its new Seattle Center home, it’s been nothing but upgrades for beloved listener-supported radio station, 90.3 KEXP.

The biggest difference is the sprawling, gleaming new space—the 28,000 square foot remodeled suite once known as Seattle Center’s Northwest Rooms—a world of change from the station’s former cramped and gear-packed digs on Dexter avenue, KEXP’s home base until December 2015.

Now there’s a pop up record shop, sign-up in studio performances open to the public, a cafe featuring monthly guest coffee roasters (this month it’s Cat and Cloud), even rumors of a brick and mortar Mexican restaurant coming along sometime soon.

But one of the station’s most-cherished features—that twinkling net of string lights adding intimacy and warmth to those live in studio videos and band photos—was missing until today.

Now, suspended strands of softly-glowing purple and blue LED globes hang loosely next to walls in the station’s live room, a high-tech take on the old lighting scheme.

It’s a new partnership with Microsoft, and it’s interactive, too: the lights use motion sensing Kinect technology that interacts with the performer’s physical movements. So, when indie rockers Car Seat Headrest came by this afternoon to break in the new space, frontman Will Toldeo’s herky-jerky dance moves were interpreted as blips, bleeps and blinking waves in the light network.

From the control room, I had at least one reservation about potential photosensitvity triggers, but the music itself proved more raucous. The light show was quite pleasant and, because the performance space is much bigger (this idea would have been too overwhelming in the old room), added a cozy glow to the concert.

KEXP DJ Cheryl Waters, who was at the center of the action hosting and interviewing the band, was trying it out for the first time and might need a day or two to get used to the new setup.

“It’s very bright,” Waters said, a few moments before the show. “I’m not used to it being this bright.”