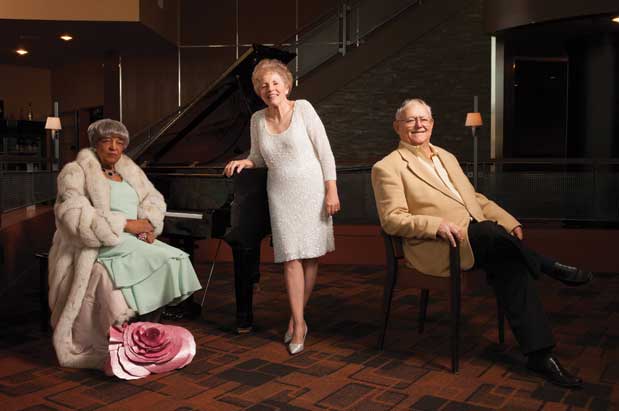 !–paging_filter–pGiven the tendency of bars and restaurants to rely on Pandora Internet radio or iPod playlists to provide background music, it’s a rare and genuine thrill to walk into a joint and discover someone tickling the ivories on a real piano. That’s especially the case when you encounter one of Seattle’s longstanding piano-bar pros, such as Ruby Bishop, Jerry Zimmerman or June Tonkin. With a combined 252 years of life experience, the city’s most seasoned lounge pianists add instant atmosphere wherever they play. brbrBishop, 94, grew up on a farm in southeastern Washington and began performing as a young girl at fairs in the Centralia-Chehalis area. She went on to become an acclaimed jazz and ragtime pianist who traveled to Vietnam to entertain the troops and knew Louis Armstrong well enough to drink Courvoisier with him. Zimmerman, who just turned 80, attended O’Dea High School, Seattle University and Cornish, and eventually became a house player at Canlis restaurant—a gig that lasted some 40 years. Tonkin, 78, graduated from Edmonds High School and worked as a Boeing secretary until 1958, when she was hired as the pianist at the original a href=”http://www.seattlemag.com/el-gaucho” target=”_blank”El Gaucho/a (at Seventh and Olive in downtown Seattle). By that point she had already memorized 1,000 popular tunes, and she’s since added at least 2,000 more to that repertoire. brbrAll three expertly take requests (preferring the Great American Songbook to the Rolling Stones) and look forward to playing their seasonal favorites at this time of year: Tonkin never tires of “The Christmas Song” (aka “Chestnuts Roasting on an Open Fire”), Bishop loves “Walking in a Winter Wonderland” and Zimmerman enjoys the rollicking “Sleigh Ride.” None plans to retire any time soon. As Tonkin says, quoting the old adage, “If you do something you love, you’ll never work a day in your life.”brstrongnbsp;/strong/p
hr
pstrongbrHave a drink, hear them play:/strongbrstrongJune Tonkin/strong plays Tuesdays–Saturdays starting at 6 p.m. at El Gaucho in Bellevue (a href=”http://www.elgaucho.com” target=”_blank”elgaucho.com/a). brstrongRuby Bishop/strong plays Sundays starting at 6 p.m. at Vito’s on First Hill (a href=”http://www.vitosseattle.com” target=”_blank”vitosseattle.com/a). brstrongJerry Zimmerman/strong plays every second Wednesday at Vito’s, starting at 8 p.m./p