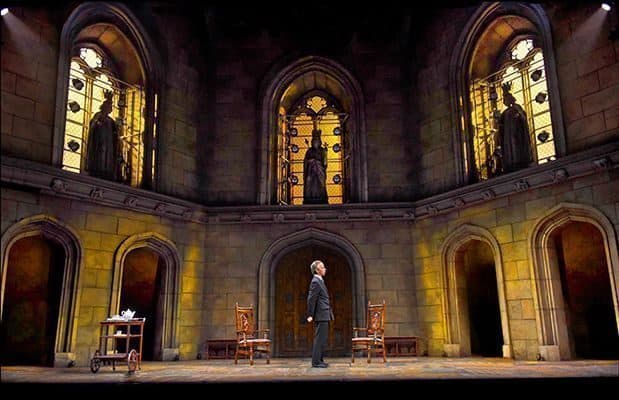 “What if Charles Windsor was finally given the keys to the British monarchy and claimed his kingdom?”

Such is the premise of King Charles III by Mike Bartlett, who wrote that his play is ”an epic royal family drama, dealing with power and national constitution.”

That the play’s structure was “surely to be Shakespearean,” he also wrote, is a natural fit, with bits and pieces of plot lifted from the Bard e.g.: soliloquies, wandering ghosts (Hamlet), powerful women behind the throne (MacBeth), a royal in disguise mingling among his subjects to seek consul (Henry V) and the rapid rise and fall of a monarch (Richard III). Accordingly, too, the characters speak in blank verse, aka: iambic pentameter.

In an age when theaters often play it safe, it’s fun to see a show that takes chances. And make no mistake, King Charles the III is an ambitious work.

With the death of Queen Elizabeth the II, King Charles the III vainly attempts to assert much of the power that’s been lost to the royal family over the years. The new king refuses to give his royal ascent to a bill he doesn’t approve of, which halts the final stage of the British legislative process. And when Charles attempts to dismantle Parliament, the stakes go even higher—especially since he hasn’t been technically crowned yet.

Perhaps for Bartlett, the fun part of writing about historical figures who are still alive is that they’re instantly recognizable, though the flip side—that these characters are familiar household names—presents its own challenges. The danger with this approach is that it may come off as a cheap device or worse, a parody, as the Bard says, “signifying nothing.” The play doesn’t neccesarily fall into this trap, though on opening night the audience laughed every time a recognizable face appeared onstage. “Oh that’s Camilla,” ”There’s Harry,” “Awww, Kate and William.” It seemed as if viewers were hoping for a comedy sketch with sights set on skewering the Windsors.

This may be because we’re still reeling from a tumultuous election and want to see people in power brought down, or that celebrities are easy targets for imitation and ridicule (where they are regularly roasted on Saturday Night Live, late night talk shows or pseudo news programs like the Daily Show). It’s easy for most Americans to assume that the British have the same relationship with the royal family, but it’s more complicated than that. To paraphrase the late, great Renaissance man, Sir Peter Ustinov, “Making fun of the Queen is equivalent to spitting on the American flag.” In this respect, it seemed like the tragedy of King Charles took a while for the audience to understand. It’s a funny play where the jokes are well timed, but the night I saw it, the crowd was laughing in places where there wasn’t a joke to be found.

For instance, when King Charles is in danger of losing his family and expresses a fear of being alone, Camilla utters, “You’re not.” It’s a touching and serious moment that elicited a chuckle from the audience for some reason. I suppose it’s a twist on the old phrase, “looking for occasions to be amused.” And that’s too bad since the play attempts to show some insight into Charles’ struggle. It could be argued that at the current moment, the Prince is the least popular of the royals. Through the years he’s been over shadowed by his mother, sons, Kate and even the ghost of Diana. (Spoiler alert: she makes a cameo. How? You’ll have to see for yourself.)

The second half of the play really came alive as the novelty wore off and the tragedy rose to the top. Arguably, the climax and most effective part of the show is a confrontation scene between Charles and William as they wrestle for power—the timeless theme of a generation gap and a son challenging his father. No matter how much an audience may want a comedy, King Charles III ends in tragedy, or as one character says to him, “You were the very best we never had.”