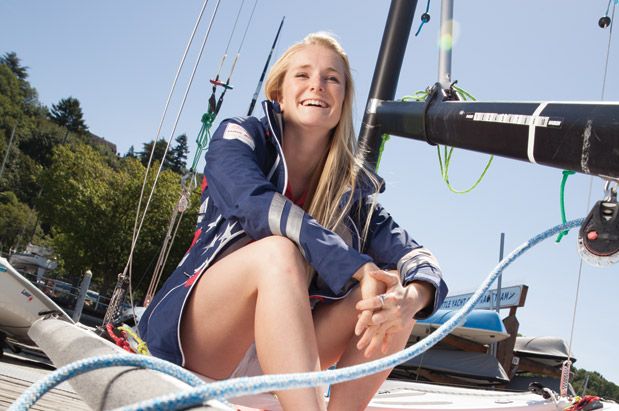 When Helena Scutt competes in this month’s Olympic games the pace will be very different from the leisurely sails she took with her family as a child, when they’d head to Ivar’s Salmon House on Lake Union for lunch from Leschi where their boat was moored.

Now 24, Scutt began taking racing lessons at the nonprofit Sail Sand Point in Magnuson Park in ninth grade and was instantly hooked. “It’s an imperfect sport; there’s always something you can work on, whether it’s how fast you’re going or how you turn the boat or your communication with your partner,” Scutt says. “I love that there’s always progression. You’re racing against other boats and at the same time you’re racing against yourself.”

The following year, Scutt joined the racing team at Seattle Yacht Club, where she trained and competed on the youth version of the 49er, a skiff-type dinghy that’s been an Olympic men’s racing category since 2000. When it was announced in 2012 that the Rio games would include a women’s category for racing the lighter-rigged 49erFX, Scutt’s years of experience put her in prime position. She and 20-year-old Californian Paris Henken, her partner on US Sailing’s senior national team for the last two years, earned their spot on Team USA in February. The pair’s strict training regime puts them in their boat up to four hours a day, five or six days a week, with almost daily strength and fitness workouts on dry land, too.

During breaks from physical training, their strategic preparations include visualization techniques, reviewing videos of their past races and practice sessions, and studying the currents of the Brazilian bay where they’ll compete. Whether or not they earn medals in Rio, Scutt feels she’s already been rewarded. “I’ve loved this journey,” she says. “I’ve loved the people I’ve met, and the things I’ve learned about the world and about myself.”

1/ A permanent resident of the United States since age 2, British-born Scutt rushed to get her citizenship at age 19 to be eligible to compete in Rio as an American.

2/ When she’s home, Scutt loves hiking in the Cascades with her friends, as well as painting landscapes of places around the globe she’s visited while sailing.

3/ The 2014 Stanford graduate will return to that university in September to complete her master’s degree in mechanical engineering.