Inspired by his foodie son, Knute Berger works up a new appetite for his hometown cuisine 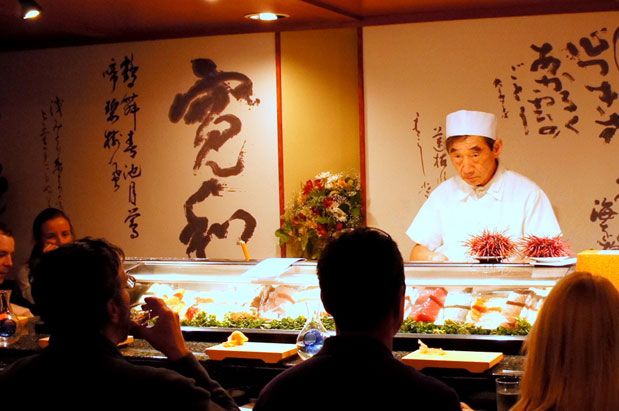 !–paging_filter–pA little more than a year ago, my son, Gus, returned from 10 years in the desert. He went off to college in Albuquerque, worked for computer game companies there and in Austin, but finally, like a coho salmon, found his way home./p
pHe seems happy to have traded in green chiles for green moss, but new appetites emerged during his years away. He and his sister were raised to try lots of foods, but he left for college with a typical adolescent’s appetite. One of his favorite dishes was a “slop” composed of chiles, refried beans and vast quantities of melted cheese. Once away, though, he seemed to develop a sharper appetite for some of the more regional foods of his childhood, like fresh seafood. Albuquerque sushi? Well, enough said. We kept him supplied with care packages of smoked salmon and treats from DeLaurenti./p
pBut his food horizons also expanded. Gus and his wife, Crystal, had become foodies. They’d watched cable cooking shows and celebrity chef cook-a-thons, and devoured cookbooks. He returned with a fuller realization that his hometown was a gastronomic paradise./p
pI’ve found my own awareness rejuvenated by his curiosity and appetite. My son’s return has inspired me to rediscover the city’s culinary offerings./p
pThat hunger played a role when he and his wife decided to rent a townhouse on Beacon Hill. Their home is not only well situated for their respective commutes, but it places them at a locus for food adventures: Little Saigon, Chinatown, Capitol Hill, Georgetown and the South End. My son immediately renewed his acquaintance with the legendary, family-owned Mutual Fish on Rainier Avenue. He embraced the varieties of fresh salmon, but also began experimenting. We’ve been to their house for fried smelt and to enjoy the buckets of seafood that go into my daughter-in-law’s stellar cioppino, the perfect marriage of Garlic Gulch and Puget Sound./p
pHis return has given me the chance to reintroduce him to some of my old favorites, like a lunch of steamed Penn Cove mussels at a href=”http://www.seattlemag.com/maximilien“Maximilien at the Market /aor the barbecued pork belly at Kau Kau in the Chinatown–International District. Likewise, his interest in seeing Southwest food reinterpreted here got me out to places I might have missed otherwise, such as Fonda La Catrina in Georgetown, where the puerco en salsa verde seems to exceed his Albuquerque-honed standards./p
pMy son’s newcomer curiosity has also led me to experience things I can’t believe I’ve missed. When he first arrived, Ia href=”http://seattlemag.com/article/shiro-worship-celebrating-seattles-first-s…” target=”_blank” gave him a copy of Shiro Kashiba’s bookem Shiro: Wit, Wisdom and Recipes from a Sushi Pioneer/em/a, documenting his evolution as Seattle’s first great sushi chef. My uncle, for many years a Japan-based fisheries diplomat, swore that Shiro’s Belltown-based restaurant was the best place in town for sushi./p
pShiro himself worked at the city’s first sushi bar at Maneki in the International District. That Japanese restaurant is a century-old institution that is also known for Japanese country cooking, yet I had never eaten there. The book sparked an interest, and my son took us there for a fabulous dinner. I was reminded that no matter how much you think you know about Seattle, there’s always something right under your nose that you’ve put off for too long. That dinner felt like the culinary equivalent of being a Seattleite who’d never visited Mount Rainier./p
pWe’ve also taken some family food jaunts, such as outings to neighborhood farmers’ markets, but also farther afield. My wife organized a day trip over to Hood Canal that turned out to be an incredible blend of scenery and palate. Our destination was the Hama Hama Seafood Store in Lilliwaup. We ordered plates of barbecued oysters and Manila clams cooked outdoors, oyster shooters, smoked salmon and Mt. Townsend Creamery cheese. While we waited for our lunch, we watched a juvenile bald eagle grab a crab fresh off the beach. We saw a kingfisher hovering like a hummingbird over the blue canal, waiting for a perfect moment to nab a fish. My 9-year-old granddaughter marveled at a shell midden the size of a Ballard bungalow. “Did people eat all those?” she asked. “Yes,” I said. “I think they’ve eaten too much!” she exclaimed. But once she’d tasted the Hama Hamas herself, all she wanted was more./p
pIt was a satisfying meal, but also satisfying to know that the next generation of Seattle foodies is already in training./p