The Mother Monster showed her somber side with death-addled new songs. Whether donning a meat dress or singing a duet with Tony Bennett, Lady Gaga rarely fails to be edgy and unpredictable, and her fans are ravenous for it. They showed up in droves—in incredible fashion no less—Saturday when Gaga’s world tour supporting her newest album, Joanne, hit the Tacoma Dome.

Many wore sequins, fishnets and the Joanne signature pink cowboy hat as they stood in monstrous, disorganized lines well after the show was supposed to start. As an homage to a 2009 photoshoot Gaga did for Hello Kitty’s 35th anniversary, Brittany Stansberry wore a Hello Kitty dress she crafted by hand from dozens of dolls purchased on Ebay.

“When I first saw that picture of her I knew that’s what I wanted to wear to her show,” Stansberry said. “She represents all different types of people and styles for me.” 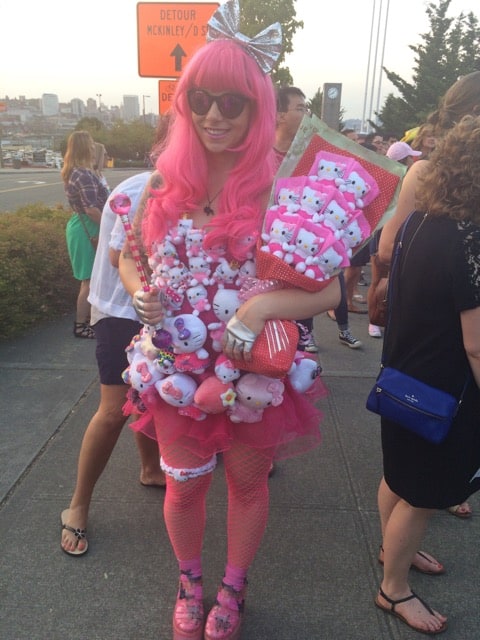 During the performance, Gaga flew in and out of costumes herself. At the opening of the show, she wore a fringy, sparkly number and later a puffy coat, bird mask and even a red monocle. Her costume changes—of which there were at least a half dozen—were timed fluidly with the performances her best-loved hits and bizarre pre-recorded video shorts, like one of a glammed-up Gaga pushing against neon walls closing in on her.

Dark and dance-y hits have long been Gaga’s thing, but the songs from Joanne are unlike her previous work. Stripped back and more lyrically vulnerable, Joanne even leans a little country-folk at times. She gave Tacoma fans a little context for the diversion.

“I swore I knew what love was,” Gaga began while introducing piano power ballad “The Edge of Glory.” “But then my best friend in the whole world died this year, and I watched her husband marry her knowing she had one month to live. And I watched him hold her until she took her last breath. Then I knew was love was.”

Death and heartache are all over Joanne and were palpable in Gaga’s Tacoma Dome performance. Aside from the loss of her best friend, much of Joanne was inspired by the death of her aunt who died young of lupus. In a particularly emotional moment, she told fans, “I was given Joanne as my middle name in honor of my aunt. When I get confused, she always brings me home.”

But heavier moments never hijacked the positive mood of the show. She waved the rainbow pride flag before her performance of “Come to Mama” and spoke about the importance of equal rights and radical acceptance to a cheering crowd. She also talked about her “inner tramp,” laughingly, before shirtless dancers shuffled out to help her perform the saucy hit, “Alejandro.”

Overall, the show was heavy with high-energy fan favorites like “Paparazzi” and “Bad Romance,” and Gaga loved when people jumped and danced. “I want to see you all a little better before I go,” she said, “your costumes, your fashion, your hearts are shining so bright!”